It looks like 1939 in Kyiv. Is Ukraine this century’s Poland? 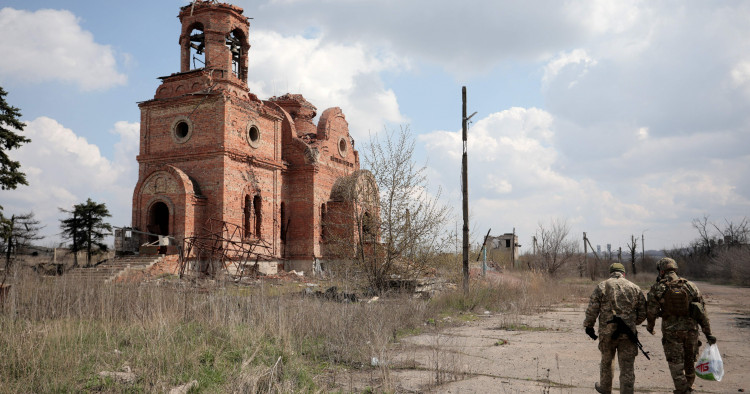 Up until late on Tuesday, April 13, Russia seemed poised to invade Ukraine. An eleventh hour phone call between U.S. President Joe Biden and Russia’s President Vladimir Putin – and a non-specific agreement between the two to hold a bilateral summit – seems to have halted Moscow’s military. “But only for the moment,” says more than one observer of the situation in Kyiv.

Following through on his initial announcement that the expanding presence of Moscow’s troops on the border with Ukraine in the Eastern Donbas region was only an exercise, Russian Defense Minister Sergei Shoigu announced on April 23 that the majority of more than 100,000 personnel would return to their regular military bases. Those not anxious to see a full-scale invasion force cross the border have breathed a sigh of relief – albeit a temporary one.

There are several reasons for this level of pessimism and fears that war could still break out before the end of the year.

One is that while Shoigu ordered these units to return to base by May 1, he also ordered heavy weapons to remain in Western Russia for another future military exercise of similar or larger dimensions. This hardware will be stored at the Pogonovo firing range in the southwestern Voronezh region, which is 160 kilometers (100 miles) east of the border with Ukraine.

Another is that while the situation on the border has eased, movements of Russian warships is turning the Black Sea into a Russian lake due to a buildup of Russian naval power. According to testimony by Ukraine Defense Minister Andrii Taran before the European Parliament's Subcommittee on Security and Defense, Russia’s naval deployments in the Black and Azov Seas are designed to “block important trade routes in international waters.”

According to the Jamestown Foundation’s Eurasia Daily Monitor, the Russian Navy will soon have an armada of 50 warships in the Black Sea. This is thanks to additional ships seconded from the Caspian and Baltic fleets – some of which are equipped for amphibious operations.

Add in a third issue that a Russian naval blockade of Ukrainian commercial sea traffic would be a crippling blow to the nation’s economy. Most of Ukraine’s $103 billion in foreign trade last year was moved by commercial sea freight.

In 2003, Russia and Ukraine signed an agreement on the “Cooperation in the Use of the Sea of Azov and the Kerch Strait” to regulate sea and fisheries. The document was signed by then-Ukrainian President Leonid Kuchma and Putin (during the first of his four terms as president), legally entering into force on Apr. 23, 2004. The territorial waters in this zone were declared to be “bi-national” and that “mercantile vessels and other state non-commercial vessels flying the flags of the Russian Federation and the Ukraine have free navigation in the sea of Azov and the strait of Kerch.

Russia’s behavior as of late is a throwback to the Soviet duplicity of old. We are reminded of the famous quote by the Bolshevik leader Vladimir Lenin: “Promises are like pie crusts - made to be broken.”

In November 2018, Russia seized three Ukrainian Navy ships – the beginning of a series of incidents. Russian coast guard vessels now regularly harass commercial ships on course for Ukrainian ports. These ships are often detained for days at a time regardless of whether the cargo is time-sensitive or perishable.

Preparing For The Worst

Up until Thursday there was more of a sense of impending hostilities here in the capital than at any time since Ukraine’s 1991 independence.

The week prior, Ukrainian Ambassador to the UK and former Foreign Minister Vadym Prystaiko described to Deutsche Welle the widespread fear of a full-scale invasion of Ukraine. “Today, Kyiv authorities have publicized the map of the bomb shelters to the population, just in case,” he explained. “People have started buying imperishable foods. So, that’s how high expectations and the fears are in Ukraine.”

Kyiv City authorities also created a new database and map showing the location of reinforced underground vaults that can be used as bomb shelters in the case of a Russian air raid. The map lists some 3,000 underground locations – to include 47 Metro subway stations, 184 parking garages, and 229 subterranean walkways.

Seeking to avoid any repeat of the 2014 shootdown of Malaysian Airlines MH 017, the U.S. Federal Aviation Administration had warned U.S. airlines to “exercise extreme caution when flying into, out of, within, or over” the Ukraine-Russia border airspace and citing “potential safety-of-flight risks associated with escalating regional tensions.”

Moscow has had long-term designs on Ukraine and much of what is now playing out is the culmination of thirty years of efforts to undermine and destabilize its former Soviet-era vassal state. Putin has consistently refused to recognize the legitimacy of Ukraine’s independence – stating Ukraine is not a “real country” and that it will always be part of the “Russian world.”

Putin has been Russia’s president for twenty of the thirty years since Ukraine’s independence. The mere existence of the now-independent nation is a constant source of angst for the former KGB Lt. Col. Those who have spoken with him state he has never recovered from the emotional trauma of being assigned to a backwater post in the former East Germany and witnessing the fall of the Berlin Wall. His nightmare continued shortly thereafter when he returned to Leningrad and suffered the humiliation of seeing the USSR crumble beneath his feet.

Ukrainian independence is the most visible symbol of the end of Russia’s imperial status. One of the most prominent Soviet affairs specialists, Zbigniew Brzezinski, a Polish-American statesmen and former National Security Advisor in the Carter Administration, once observed: “It cannot be stressed enough that without Ukraine, Russia ceases to be an empire, but with Ukraine suborned and then subordinated, Russia automatically becomes an empire.”

“Taking back” Ukraine is seen as a balm for the blow to the national pride suffered with the Soviet implosion – restoring a sense of honor to those around the Russian president – many of whom served with him in the Soviet-era KGB.

But a shorter-term problem for Putin is the deterioration of internal conditions in Russia. Years of oil prices sitting at one-half to one-third of what Russia enjoyed in the first decade of his rule have decimated the nation’s cash reserves and have forced significant reductions in state spending. In 2020, Russia turned in an eleven-year low in economic performance.

This combines with an almost endless stream of stories in Russia about runaway corruption – particularly in the ranks of those who are close to Putin. Support for the now-jailed opposition leader Aleksei Navalny has increased markedly since the January release of a documentary by his Anti-Corruption Foundation. It details the $1.35 billion palace built by the Russian dictator on the Black Sea – financed with absconded state funds.

These variables set the stage for Putin – as with the second Chechen conflict in 1999 – to kick off the proverbial “short victorious war” as a way boost his ratings. He believes an invasion of Ukraine could generate endless accolades for having brought about the restoration of Russia’s empire. The decision by Shoigu to keep heavy weaponry in place near the Ukraine border leaves the threat of invading Ukraine later alive and well. A short snap deployment such as the one just completed and everything is back in place for a blitzkrieg-style invasion.

All of which makes Ukraine in 2021 look like Poland in 1939. A nation that a neighboring dictator believes he can simply roll his armies into while the western alliance does nothing. If this scenario does eventuate, Putin will likely also attain another goal he has sought for years.

Many on Putin’s team view the system they have created in Russia as not sustainable. Contradictions of trying to maintain control of a nation as large as Russia with an increasingly unhappy population have every chance of collapsing the regime.

As such, many of the actions taken in recent years have all been about Moscow trying to undermine the EU and other European institutions and ensure that their untergang (downfall) occurs before that of Russia’s current ruling order. The aim is to be the last man standing.

Two years ago, Gustav Gressel of the European Council on Foreign Relations in Paris told Euronews that Russia sees Europe as “too weak to be a superpower” and not worth investing time on because it won’t survive. “Russia is just waiting for their time to come when the EU and NATO collapse.”

Should Russia invade Ukraine and NATO take no action, a subsequent splintering of the western alliance could be the final outcome. “There is a modern-day equivalent of what used to be called the ‘domino theory’ in today’s world,” said a Polish political analyst just after the 2014 invasion of Ukraine. “The U.S. failing to adequately to prevent Russian domination of Ukraine and Poland could not just break NATO. It could prompt U.S. Asia-Pacific allies like Japan to conclude they also can no longer depend on Washington.”

Reuben F. Johnson is a defense technology analyst and political affairs correspondent based in Kyiv. The views expressed here are his own.