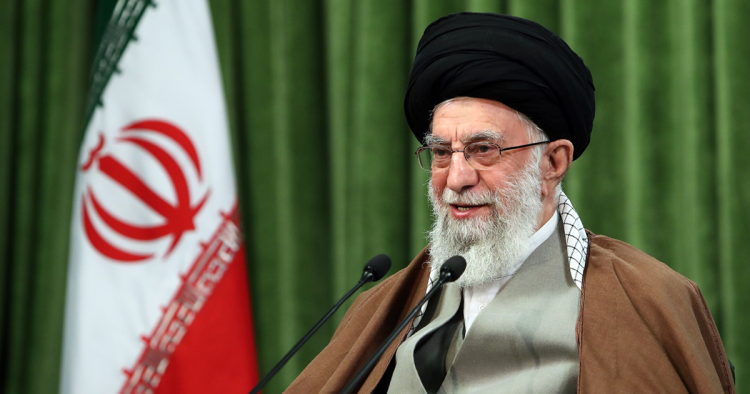 This is the final part of a three-part series.

When Ayatollah Ruhollah Khomeini, the founder of the Islamic Republic of Iran, died at the age of 89, he and the regime he established enjoyed the support of most of the country’s high-ranking clerics.

His successor, Supreme Leader Ayatollah Ali Khamenei, aged 82, faces a very different situation, however. Most senior clerics apparently do not support him, and the "deviation" of the new generation of clerics has caused growing concerns within the regime.

The composition of the marjas

Ayatollah Khamenei, despite serious doubts about his educational level, is officially considered a marja. Marja is the highest title in Shiite seminaries, referring to a qualified jurist with the authority to issue a formal ruling on religious matters. By holding religious classes in Tehran, Khamenei is training a carefully selected group of clerics for sensitive government positions in the future. These classes are important for Khamenei’s image as a marja because it is a necessity for marjas to personally hold advanced religious courses for their students.

It appears that only a few marjas support the supreme leader by occasionally praising him or endorsing his views. In fact, Hossein Nouri Hamedani and Nasser Makarem Shirazi are the only grand ayatollahs who defend Khamenei or his positions regularly, while Mohammad-Ali Alavi Gorgani and Jafar Sobhani do so from time to time.

Abdollah Javadi-Amoli is another marja who still supports the supreme leader, even though the controversial 2009 election caused a rift between this pro-Hashemi Rafsanjani ayatollah and Khamenei, and it has not been fully repaired.

Apart from the above figures, the most prominent marjas in Iran are traditional clerics who do not support Ayatollah Khamenei and his policies. For at least a decade, they have generally refused to support the supreme leader at critical junctures. These include Hossein Vahid Khorasani, Lotfollah Safi Golpaygani, Mousa Shubairi Zanjani, and Sadeq Hosseini Shirazi. To these marjas should be added Ayatollah Ali Sistani, who is the most influential marja in Iraq — and internationally — but is a native Iranian ayatollah and has many followers in Iran. Sistani holds different positions than Khamenei, but he usually hesitates to comment on political issues, especially those involving Iran. These clerics are critical of government policies to varying degrees, but typically refrain from making political comments and advocate the separation of religion and government.

Besides the above ayatollahs, there are other marjas who used to be revolutionary clerics, but over the past two decades have supported the so-called reformist faction in Iran; they are absolutely mistrusted by the supreme leader. Asadollah Bayat Zanjani, Ali-Mohammad Dastgheib, and Mohammad-Ali Gerami are examples of these clerics who, from time to time, criticize government policies but avoid direct criticism of Khamenei.

It should be noted that the most prominent marjas critical of the government, who were formerly revolutionary clerics, have passed away in the last decade or so. The most important of these was Ayatollah Hossein-Ali Montazeri, who was Ayatollah Khomeini’s designated successor, but he was ousted in 1988 following his criticism of the state's human rights record. He became a staunch critic of the regime during Ayatollah Khamenei's leadership and died in 2009. Another marja critical of the supreme leader’s views was Yousof Sanei, the attorney general under Ayatollah Khomeini; he passed away in 2020. Abdul-Karim Mousavi Ardebili, the head of the Supreme Court under Ayatollah Khomeini, was another marja who disagreed with Ayatollah Khamenei’s views but refrained from public criticism; he died in 2016.

Although the above three marjas have passed away, they all had students who are still active in seminaries. That is especially true for Ayatollah Montazeri, who was viewed as the highest-ranking marja in Iran.

Nevertheless, it should not be forgotten that according to tradition in Shiite seminaries, reaching the highest levels of the clergy requires attending the marjas’ courses. As a result, given the current state of the marjas in Iran, many future clerics will not be trained in the manner favored by Ayatollah Khamenei.

The "apostasy" of clerics

In recent years, Iran’s supreme leader and his associates have repeatedly expressed concern over secularism in the seminaries (see part one of this series), especially the idea of ​​separation between religion and politics. Belief in this concept was prevalent among the marjas of Qom and Najaf before the 1979 Revolution, but Ayatollah Khomeini challenged it and proposed the alternative idea of ​​political Islam or revolutionary Islam, which became the official ideology of the Islamic Republic.

Part of the concerns of government authorities over the “secularization” of the seminaries is about the new generation of clerics distancing themselves from the Islamic Republic’s code of conduct. This concern is also growing among traditional clerics — even those who disagree with the Iranian regime.

In recent years, for example, Iranian religious authorities have repeatedly criticized clerics who refuse to wear clerical garb in public. This is rooted in the fact that ordinary people who are dissatisfied with the conditions in Iran consider clerics the representatives of the state. As a result, these clergymen are often criticized, ridiculed, or insulted in public. Over the past few years, numerous cases of physical attacks on clerics have been reported in different cities of Iran. Clerics in government positions usually have drivers or even bodyguards and experience less social pressure, but young seminary students and ordinary clerics are forced to take precautionary measures to protect themselves in public.

The growing presence of a new generation of seminary students on social media has also raised concerns among clerics and state officials. Many of these clerics try to portray a modern face to attract virtual audiences, which sometimes violates the seminaries’ religious traditions. For instance, some of these clerics write about their personal emotions and romantic feelings or even share vulgar jokes on social media, which is unacceptable in the eyes of religious authorities.

Finally, some young clerics are attracted to Western political, philosophical, and cultural ideas and have expressed their views in public. These clerics implicitly or explicitly sympathize with Western values, and some even advocate political secularism in the sense of the separation between religion and government.

In a warning about the prevalence of Western ideas in the seminaries, Abdollah Haji Sadeghi, the supreme leader's representative in the Islamic Revolutionary Guards Corp, suggested on Oct. 26, 2021 that a kind of "apostasy" was developing among the former revolutionaries who believed that "Martin Luther's reform and religion reform are necessary" in Islam. He stressed that the "enemies ... seek to promote a secular religion. ... Today we see how they write articles, publish books, and speak out to revive secularism. They even seek to promote a non-revolutionary religion in the seminaries.”

Many of these so-called apostate clerics are close to the reformists and are under the surveillance of Iran's security apparatus. But it is noteworthy that even some clerics close to the conservatives are attracted to Western ideas. A notable example is the experience of a hard-line, state-run religious university called the Imam Khomeini Educational and Research Institute, founded by the late Mohammad-Taghi Mesbah Yazdi, a prominent theorist who supported Ayatollah Khamenei. Over the past three decades, this institute has sent carefully selected scholars to the West to study human sciences and become revolutionary professors, but many students were influenced by Western ideas and some even did not return to the country.

The unknown fate of the revolutionary clergy

Although the Islamic Republic came to power thorough the mobilization of the clergy behind Ayatollah Khomeini, the failure of the Iranian regime has created a fundamental crisis for the project of the revolutionary clergy.

This is in spite of the fact that the revolutionary clergy is still one of the main pillars of the Islamic Republic; according to the constitution and other laws, dozens of key government positions and hundreds of other public offices must be in the hands of revolutionary clerics (see part two of this series).

We do not know how long the Islamic Republic will last in Iran, especially given the growing social, economic, security, and political challenges of recent years. But even if the regime survives for a considerable time after Ayatollah Khamenei, internal dissension and a weakened power base among the clergy will make its structure more vulnerable to collapse.

This possibility poses an existential threat to the Iranian regime, especially as none of the supreme leader’s potential successors enjoys a significant degree of influence with the authorities. In other words, the next leader — whoever he might be — will likely have a more precarious position than Ayatollah Khamenei.