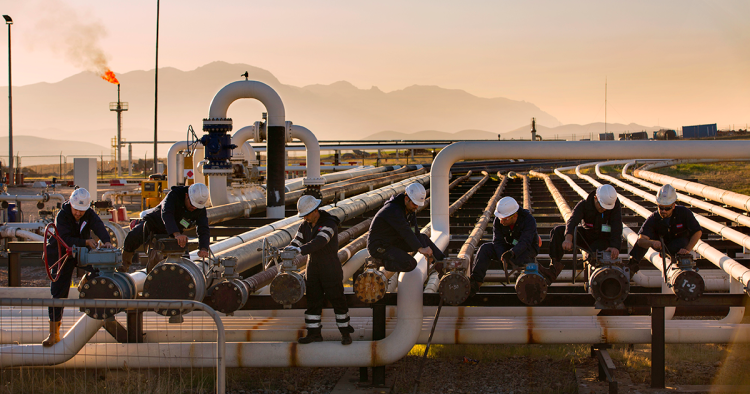 This article is part of a series that draws on the conclusions of a high-level workshop on economic diversification and the energy transition held on the sidelines of the American University of Kurdistan’s annual Middle East Peace and Security (MEPS) Forum in November 2022.

On the journey from Dubai to Erbil by plane and Dohuk by road for the MEPS Forum, the energy, environmental, and economic challenges of Iraq and the Kurdistan region are written in the landscape. Gas flares around Basra, Kirkuk, and Dohuk mark the site of major oil fields. Harnessing that natural gas productively is the first step to a cleaner and more diversified national economy.

The participants at the MEPS Forum discussion on energy included students from the American University of Kurdistan in Dohuk and elsewhere in the Kurdistan Region of Iraq (KRI), and from the rest of the country. They were keenly interested in the role of oil and gas in their national economy, the implications for the future of Iraq, and the “resource curse.”

Without revisiting the extensive literature on the “resource curse,” its reality, and manifestations, it is undeniable that Iraq displays several of the classic signs associated with high dependence on petroleum exports. Oil makes up 99% of Iraq’s exports. The government sector is heavily overstaffed, often in patronage-based and unproductive roles; corruption, rent-seeking, and the ethno-sectarian and partisan allocation of political and civil service positions are endemic. A truly independent private sector barely exists.

Non-oil activities, such as agriculture and industry, have been neglected. At the same time, sectors that in some petro-states are well-funded and effective, such as electricity, public education, and health care, are also in very poor shape. Kurdistan Prime Minister Masrour Barzani, interviewed at the MEPS Forum by Karen Young, senior research scholar at Columbia’s Center on Global Energy Policy, recognized these problems: “Iraq and Kurdistan Region shouldn't only rely on oil and gas.” He pointed to diversification in agriculture, tourism, and other sectors. The KRI already attracts a reasonable level of tourism from the rest of Iraq and from Iran.

Iraq faces other problems that are not caused by its petroleum dependence, but which its ineffective government struggles to solve: a legacy of violent conflict and insurgency, the lack of a state monopoly over paramilitary groups, interference and intervention by its neighbors (mostly Iran, but also Turkey), water shortages, and land degradation.

The KRI is in many ways better off than the rest of Iraq, with better infrastructure and greater safety and security. Nevertheless, it displays many of these symptoms in microcosm. It suffers from several other problems beyond those of Iraq as a whole. It does not have its own currency and cannot issue sovereign debt. As a landlocked entity, it is dependent on problematic neighbors — war-torn Syria, sanctioned Iran, federal Iraq, and Turkey — for imports and exports.

The legality of its own hydrocarbon sector and exports have been a topic of debate and dispute ever since the ratification of the 2005 constitution. In February 2022, the federal Supreme Court, in a ruling widely seen as politicized, declared that the Kurdistan Regional Government’s (KRG) own oil and gas law of 2007 was unconstitutional. Apart from the KRG’s own oil sales — which are under episodic legal pressure from Baghdad — it relies on transfers from the federal budget, which are often late or entirely absent, unpredictable in size, and subject to political wrangling. It has 1.3 million public servants from a population of about 6.3 million. It has accumulated debts variously quoted at $17-31 billion, to public employees in unpaid salaries, oil traders and producers, electricity companies, Iraqi banks, and others.

Mr. Barzani remarked that the KRG was assembling a team to go to Baghdad and “settle all outstanding issues” with the new federal government formed in October. He complained of “illegal actions” taken by the government, and said they should work together to write a new national hydrocarbon law, which has been a perennial sore point since a draft in May 2007, followed by two further drafts in 2011, none of which were ever approved.

The KRI is also damaged by an increasingly deep and bitter division between the two leading parties — the Kurdistan Democratic Party (KDP) based in Erbil in the north, to which Mr. Barzani belongs and which dominates the government and the oil sector, and the Patriotic Union of Kurdistan (PUK) in Sulaymaniyah in the south of the KRI. Most of the KRI’s major gas fields are located in areas controlled by the PUK. Although the two parties have exercised a fairly constructive duopoly over the KRG since 2003, and worked together to promote Kurdish interests in the federal authorities in Baghdad, their relationship has deteriorated as the PUK has gradually declined in power and influence. Regional elections due in October 2022 have been delayed for a year, and activists and observers complain of a worsening situation for democracy and independent media.

The issue of diversification is difficult but urgent, given increasingly tight global climate policies, the advances of non-fossil technologies, and the limited lifespan of the KRI’s oil resources.

Iraq as a whole has a ratio of oil reserves to production of almost 100 years, and could make substantial new finds with additional exploration. It will be one of the world’s leading oil producers out to mid-century and beyond, when the world is supposed to be nearing net-zero greenhouse gas emissions to meet its climate goals.

But within this, the KRI produces about 400,000-450,000 barrels per day of oil, that is, about a tenth of the national total. Its fields are smaller and more geologically challenging than those in southern Iraq and there have been almost no sizeable discoveries in recent years. It is therefore faced much more imminently with the challenge of diversifying its economy, exports, and government budget revenues.

Using natural gas productively is an essential first step in that diversification. It might sound paradoxical, given that many hydrocarbon-dependent countries group the fossil fuels together, and seek to move into renewables, hydrogen, and other new energy systems. But Iraq is at the stage its Gulf neighbors were in the 1970s; it has to walk before it can run.

Iraq produces about 3 billion cubic feet per day of associated gas — the gas dissolved in oil that bubbles out when the oil comes to surface. Only about half of this is captured and used productively, mostly for electricity generation. The rest is burnt off, damaging the health of neighboring communities with air pollution, and releasing the greenhouse gases carbon dioxide and methane. Yet at the same time, Iraq suffers from chronic power deficits and shortages of gas that oblige it to burn oil for power — cutting its export earnings — and to buy expensive and unreliable gas from neighboring Iran. Peak power demand in “federal” (non-KRI) Iraq is estimated at more than 34 gigawatts (GW), but the country struggles to generate more than 20 GW, and much of this disappears in an antiquated grid.

Only the KRI produces significant quantities of non-associated gas — that is, gas extracted independently of oil. The Khor Mor field in the south of the region provides gas to power plants and is currently being expanded. Several other major fields have not been developed yet. The KRI does not suffer as badly from flaring as federal Iraq, but several oil fields are still not connected to processing facilities and pipelines. In January 2022, power equipment company Aggreko announced completion of a project to use flared gas from the Sarqala field in southern Kurdistan to generate 165 megawatts (MW) of electricity.

The KRI’s priority is to ensure reliable power generation and then the supply of gas to industry. A pipeline is under construction from Erbil to Dohuk that would bring Khor Mor gas to the under-utilized power plant there, which relies on expensive diesel. However, a number of rocket attacks on Khor Mor, probably intended by Iran-linked groups to pressure the Kurds during the period of government formation in Baghdad, and the KDP-PUK dispute, have held up the project.

The development of the region’s gas sector has also suffered from long delays in approving field developments, apparently arbitrary regulatory decisions from the Ministry of Natural Resources, lengthy waits for payment to international oil companies, the lack of infrastructure to gather associated gas, and legal disputes with companies such as the Pearl Petroleum consortium (which operates Khor Mor) and Genel Energy (which held the contracts for the large Miran and Bina Bawi gas fields). These fields contain “sour” gas, that is, gas with a high content of toxic, corrosive hydrogen sulfide. The KRG would need to secure a large, technically-skilled partner to play its intended role of processing and selling such gas resources. And at the moment, the region has no systematic gas market, from which companies can buy and sell with transparent prices and conditions.

After satisfying domestic demand, the development of Khor Mor and other fields could give the KRI a gas surplus by the mid to late 2020s. This makes it one of the few regions adjacent to Europe that could supply significant additional quantities of gas by pipeline, helping to replace Russian supplies (Algeria, Libya, the Eastern Mediterranean, and Azerbaijan are the others, but all face various constraints when it comes to politics or resource availability).

Gas from the KRI could go to federal Iraq, helping ease its chronic gas and power deficit and reliance on Iran; it could fuel the region’s under-utilized power plants and so facilitate electricity sales to federal Iraq; or it could go to Turkey and, via Turkey’s pipeline network, to south-eastern Europe and Italy. Once the Khor Mor-Erbil-Dohuk connection is complete, it is only about another 70 kilometers to the Turkish border, and a short distance beyond to the Turkish gas grid. Exports of about 5 billion cubic meters (bcm) per year by 2030, and ultimately about 15 bcm annually, are feasible. This would be a helpful if not huge contribution compared to the 155 bcm supplied by Russia to Europe last year.

At recent crude prices, the KRG earns about $10-12 billion per year from oil exports. It might bring in about $2-4 billion annually from large-scale gas exports, after the cost of pipeline tariffs to get to markets in Turkey and beyond — a useful complement to oil, but not transformational.

The gas would be important beyond the immediate financial impact, though. It would create a long-lived revenue stream to help replace an eventual — and perhaps imminent — decline in oil output. The domestic use of gas would build the local economy, offering opportunities in areas such as oil refining, cement, ceramics, glass, food processing, and other local industries. More reliable and cleaner electricity would save government and private funds spent on diesel, and improve business and living conditions. Electricity provision is not just a question of gas: The KRI has potential to rehabilitate its hydroelectric dams, and to install more solar power. And becoming a significant gas supplier to Turkey and Europe would heighten the KRI’s geopolitical importance.

Given the legal battles, and an ongoing arbitration case between Baghdad and Turkey over use of the Iraq-Turkey oil pipeline, gas exports would almost certainly require both Erbil-Baghdad and Erbil-Sulaymaniyah accords. Those are very thorny political disputes. Outside mediation by the U.S. and EU is likely essential. Both these governments have internal policy barriers to funding fossil fuel projects, but they should recognize the unique circumstances and strategic importance of the Iraqi-Kurdish gas and power sector.

Robin M. Mills is CEO of Qamar Energy, and author of The Myth of the Oil Crisis.