Lebanon is Not Two Camps Part 2 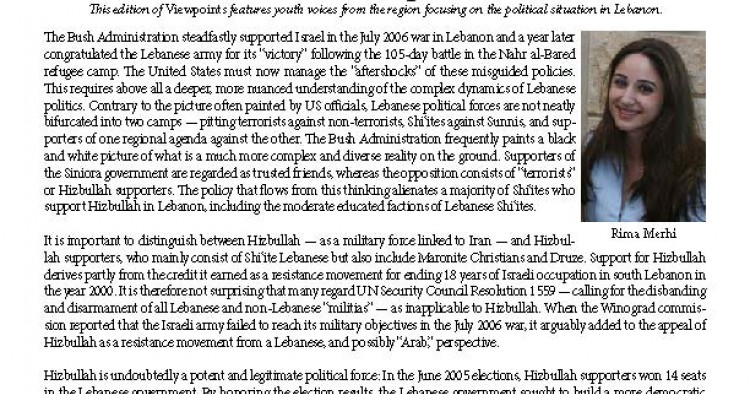 March 14, the movement in Lebanon that currently holds majority power in the government and parliament, is branded by the media and international community as being an instrument and product of American foreign policy. This image is an oversimplification of the dynamic that exists between the March 14 movement and the United States, and has created a sharp dichotomy between March 14 and its political opponent, March 8. It has fostered the impression that the two blocs are merely pro-American pitted against anti-American political forces, a static image that fails to embody the actual complexities of Lebanese politics.

Rather than being spoon-fed American policy, the relationship between March 14 and the American government is based on a convergence of interests; it is an alliance rather than a one-way allegiance, a partnership rather than a patron-client interaction.

The international community’s support of March 14 has helped forge this perceived pro-American stance. The expulsion of Syrian troops from Lebanon in May 2005, with the help of the Americans, is testimony to this relationship. March 14’s embrace of UN Security Council (UNSC) Resolutions 1559 and 1701, and its strong interest in promoting a sovereign and independent Lebanon, free of Syrian tutelage, are initiatives that have been strongly supported by the United States. Furthermore, Hizbullah’s anti-Israeli and anti-American stance also furthers March 14’s relative pro-American position. However, although March 14 is certainly backed by the American government, it is important to place US support within the broader context of international backing.

The European Union, Russia, and Arab states such as Saudi Arabia and Egypt have provided March 14 with clear and unquestionable support, as shown by their backing of the disarmament of Hizbullah and the holding of presidential elections. The notion that March 14 is being spoon-fed American policy, in a manner similar to the governments of Iraq and Afghanistan, is misleading. Evaluating its relationship with the United States, Lebanon is more like a Saudi Arabia than it is like an Iraq; although the interests of both sides clearly overlap, there is room for disagreements.

The interests of March 14 and the United States are convergent. It is in the interest of March 14 to have a disarmed Hizbullah, controlled borders with Israel and Syria, and presidential elections. All of these priorities are directly in line with American interests, but for different reasons. Whereas March 14 needs this agenda to maintain political legitimacy and fulfill its responsibilities as leaders of the country, the United States has an interest in protecting Israel, keeping Syria and Iran in check, and maintaining a certain level of regional stability in order to avoid further destabilizing Iraq. However, overlaps in incentives remain: Both March 14 and the United States want March 14 to stay in power, an end to Syrian political manipulation, and a stable Lebanon.

Understanding this dynamic in terms of a convergence rather than a hegemonic one-way imposition of American policy also helps explain why, at times, the Siniora government has not been on the same page as the United States. In the recent February 14 demonstration, Prime Minister Fouad Siniora and a March 14 founder, Walid Jumblatt, both condemned the assassination of Imad Mughniyya, one of America’s most-wanted terrorists. Two days later, Parliament majority leader MP Sa‘d Hariri specifically articulated that March 14 would never accept being spoon-fed policy by the United States. Additionally, the Siniora government is explicitly against peace with Israel and has done nothing to further the possibility of Syrian-Israeli peace talks. These clear moments of divergence cannot be understood or appreciated if the Lebanese political scene is viewed as a simplistic pro- versus anti-American dichotomy.

Unfortunately, March 14 is much at fault for the persistence of this distorted image. The movement has not done enough to take Lebanese ownership of their agenda. This has affected March 14’s support base, where many supporters view the Iraq War as an invasive American occupation and not as a democratic campaign to win Iraqi freedom against dictatorship and terrorism.

March 14 is aware that many supporters have trouble reconciling their support for the movement with their views on American interference in the region. This has made it easier for Hizbullah to place Israel, the United States, and March 14 on the same pedestal, which further brands the Siniora government as pro-American. March 14 understands it must better articulate its position vis-à-vis American foreign policy and knows it has lost precious time in doing so.

Looking forward, it is important that March 14 crystallizes its relationship with the United States as one that is friendly but not intrusive. The United States and the international community also have the obligation to respect March 14’s independence of thought and action.

For the consumer of epic media encounters and the Lebanese voter, the March 14 movement’s success will be measured against its ability to self-sufficiently and proactively declare Lebanese policy. Taking ownership of its raison d’être should be March 14’s immediate priority. This can be accomplished by defining an independent Lebanon that is nationalistic and Arab and that welcomes friendly foreign partners. For these results to happen, it is important that March 14 be given a fair hearing, not just by the international community, but more importantly, by the Lebanese people.