Making sense of the Beirut clashes 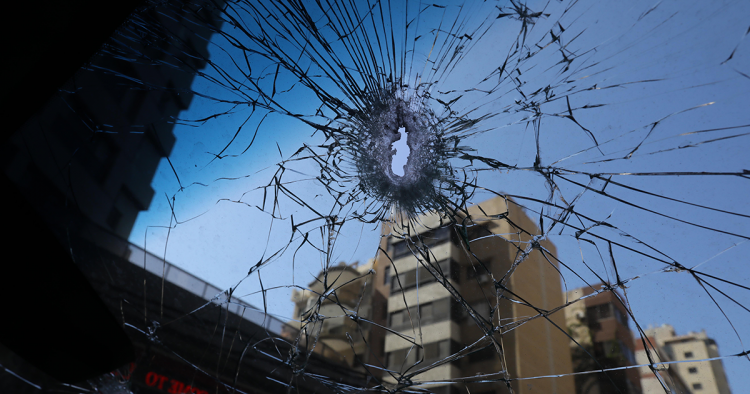 Memories of the Lebanese civil war resurfaced this week as images appeared of children hiding in hallways and behind cars while deadly sectarian clashes unfolded outside their schools in Beirut’s Tayouneh neighborhood. Protests organized by Hezbollah and the Amal Movement to demand the removal of the judge investigating the August 2020 Beirut port blast quickly went south when as yet unidentified snipers opened fire on the crowds, eventually killing seven and wounding dozens. The “peaceful” protesters seemingly retaliated with gunfire and rocket-propelled grenades. The two sides turned Tayouneh and its surrounding areas into a war zone, terrorizing citizens and destroying property at a time of unprecedented socio-economic hardship.

Eyes on the ball

As is universally the case in Lebanon, stories diverge and never match when it comes to what really happened, but one consistent narrative to date seems to be that “provocations” and the “crossing of sectarian red lines” directly fed into the clashes. Many, however, believe that the aggression was premeditated by the Lebanese Forces, a traditionally Christian, Saudi-backed, right-wing militia-turned-party that remains the staunchest and most vocal opponent of Hezbollah in Lebanese politics today.

The Beirut clashes may seem sudden, but tensions have been simmering for months ever since establishment parties — Hezbollah chief among them — started becoming increasingly outspoken about sacking judge Tarek Bitar for “politicizing” the investigation into the Beirut port explosion. Threats and intimidation tactics, the latest of which came from Hezbollah's secretary-general himself earlier this week, had multiplied in the buildup to the Tayouneh events.

If there’s one key takeaway from this week’s developments, it’s that observers, both domestic and foreign, should keep their eyes on the ball: shielding the port blast investigation and ensuring it continues unabated. Lebanon’s political establishment has mastered the art of diversion and manipulation, and Lebanese political parties are once again leveraging religious affiliations, identity politics, and threats of civil war to divert attention away from a publicly supported investigation that may implicate nearly all of them. For years, politicians have cemented their favorite, forcibly imposed tradeoff: civil peace and stability vs. justice and accountability. This approach has generally been successful — more particularly since the general amnesty law was passed in 1991 — and has often resulted in inconclusive or botched investigations as well as political reconciliations that favored maintaining the status quo over finding and acting upon the truth.

But even beyond the scope of the investigation, the Tayouneh events have brought to the surface important considerations and contrasts in Lebanese politics and society.

Regardless of whether or not their supporters were actually involved in the clashes, the Lebanese Forces will come across to many disillusioned Lebanese — Christians in particular — as the last "line of defense" against Hezbollah's ever growing influence. Such realities will further embolden the Lebanese Forces, thus increasing the likelihood of political miscalculations and foolish military musings.

This is in contrast with the ailing Free Patriotic Movement (FPM), the party founded by current President Michel Aoun and headed by his sanctioned son-in-law, Gebran Bassil. The FPM continues to be awkwardly stuck between credibly and unapologetically supporting Bitar's investigation and preserving the deteriorating relationship with its ally Hezbollah. This cautious, no man’s land approach has cost the party ground and leverage in both the fight for Christian public opinion and the shakier-by-the-day 2006 memorandum of understanding with Hezbollah.

This week’s events also constitute the first real stress test for the Mikati government barely a month after its formation. A heated exchange between President Aoun and the Hezbollah-backed minister of culture earlier this week resulted in an adjournment of the ministerial session without deciding the fate of Bitar’s tenure. The implosion of the cabinet seems to have been averted for the time being, but Hezbollah and Amal retain the resignation card up their sleeves.

On another front, and when coupled with earlier incidents in Khalde and Chouaya this year, the Tayouneh events are further bringing to the surface the deep discontent among non-Shi’a communities with Hezbollah's blatant intimidation tactics and "I do as I please" attitude. Increasingly in 2021, that discontent has begun manifesting itself violently on the streets in a potential omen of what’s yet to come.

That said though, a full-blown civil war remains unlikely, namely because to materialize, civil wars require parties that are both willing and able to take up arms and sustain fighting. Unless simultaneously cornered, disowned by its Christian allies, and faced with serious regional challenges, Hezbollah has very little incentive or desire to wage war domestically, which explains in part its passivity vis-à-vis this year’s clashes. That does not mean, however, that provocations and bursts of violence will not continue. In parallel, and no matter what the Lebanese Forces and its patrons may think — or are inclined to think — following this week’s events, serious military clashes outside the realm of self-defense with a party that’s been fighting non-stop throughout the region over the past decade will not end well.

Finally, and on the subject of violence, such clashes have already drawn well-deserved criticism toward the Lebanese security forces, and by extension to the civilian leadership with oversight authority over them. The latter have harassed, beaten up, and seriously injured unarmed protesters during the wave of peaceful street demonstrations that Lebanese civil society and opposition groups have been leading over the past two years. As soon as heavily armed establishment militias come out onto the streets, however, the security apparatus suddenly disengages or contents itself with “managing” or “containing” the situation. Lebanon’s security considerations are understandably complex, and the military is often stuck navigating the fine sectarian lines that political leadership has de facto imposed upon it. The mismatch between crushing peaceful protests and accommodating thugs, however, is slowly but surely eating away at the integrity and credibility of Lebanon’s security forces and warrants urgent attention.

As they think about what to make of this week’s events, Washington policymakers should understand that in Lebanon, the enemy of your enemy is still not your friend. Despite the tyranny and dominance of Hezbollah, sliding into the 2005 mindset of binary options and taking sides are natural traps that will backfire and further entrench the status quo, especially when it comes to siding with or implicitly supporting other militias.

That does not mean, however, that a tame or apologetic approach toward Hezbollah will deliver favorable results either. The point is that the conversation in and around Lebanon is often stuck between being naively accommodating or unreasonably hawkish toward Hezbollah. Anti-Hezbollah positions are often misconstrued as endorsements of the remnants of March 14. Approaches that do not tackle Hezbollah head on are accused of Chamberlainian appeasement and sympathy. Despite some disillusionments, the post-October 2019 era continues to give the United States and its European allies opportunities to truly position themselves as trusted and direct partners to the Lebanese people themselves. Seeking out these opportunities requires an issues-based rather than a systemic and broadly partisan approach to Lebanese politics. This holds particularly true given the incestuous hypocrisy and collusion within Lebanon’s political establishment.

Along these lines, the United States should continue to support and empower an impartial and independent investigation into the Beirut port explosion with the Lebanese judiciary at its core and the international community in a supporting role as required. In the meantime, contingency planning is needed in the increasingly likely event of the establishment sacking Bitar and appointing a puppet judge to dilute the investigation. Actions could include closely coordinating with the Europeans to impose targeted and synchronized sanctions on anyone attempting to impede justice; supporting an international investigative mission into the blast, which Lebanese and international organizations have consistently been calling for; and potentially releasing any information or intelligence reports that individual countries have already gathered on the blast.

Over the past few weeks, and while the port blast investigation was going through highs and lows, a phrase began circulating online in Lebanese circles: If it can be destroyed by the truth, it deserves to be destroyed by the truth. This week’s Beirut clashes came, at least in part, in the context of the broader, months-long struggle to either unearth the truth or completely bury it.

Christophe Abi-Nassif is the director of the Middle East Institute’s Lebanon Program. The views expressed in this piece are his own.