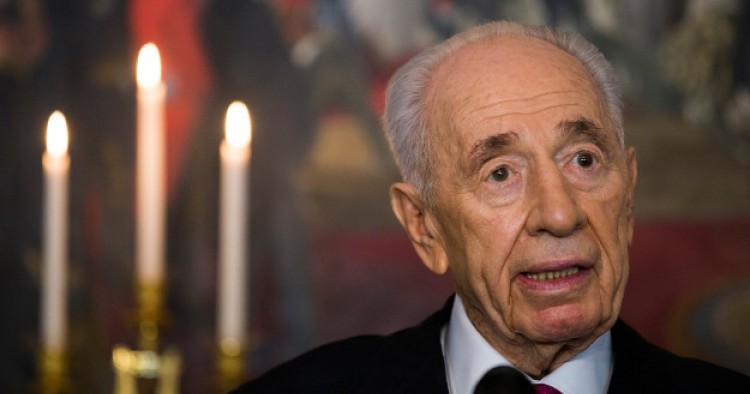 When I served at the State Department as Assistant Secretary of State for Near Eastern Affairs (1983-89), I participated in a series of meetings with Shimon Peres in Jerusalem and Washington. Clearest in my memories of him were his witticisms. In describing the problems of leading Israelis, he asserted “you must understand that half our people see themselves as kings and the other half as prophets.” On another occasion he mused, “We imported our political system (proportional representation) from Eastern Europe and we have succeeded remarkably well in making a bad system worse.” He would slip such observations into conversations as his way of explaining the difficulties he was having in the existing coalition in the mid-1980s when the Labor Party alternated power with Likud in the top positions. I never heard Peres attack a fellow Israeli politician by name although Israelis openly criticized his penchant for deviousness and plots.

He is rightly remembered for his contribution to Israel's nuclear program. As related to me by one of his close associates, Peres had developed extremely close relations with the French political leadership in the 1960s and was on the verge of getting a secret agreement to provide Israel with critical technology. That government suddenly and unexpectedly collapsed. Peres frantically worked to secure the requisite signatures for the export of nuclear technology in the waning hours of its tenure. His success probably advanced Israel's nuclear program by several years.

As an aide to U. S. presidential envoys Philip Habib and Donald Rumsfeld and to Assistant Secretary of State Richard Murphy, I was in several meetings with Shimon Peres while he was alternately prime minister and deputy prime minister with Yitzhak Shamir. It was what some of us called privately a “government of national disunity.”  We were trying to arrange an agreement or, rather, two separate agreements with Lebanon brokered by the United States, for mutual Syrian and Israeli withdrawals from Lebanon.

Peres and then defense minister, Yitzhak Rabin, along with senior Israeli military and intelligence officials, favored efforts for an agreement, but they were not willing to risk much of their fragile support in a divided Israeli electorate to get it. Shamir claimed to favor an agreement, but worked behind the scenes to mobilize Israeli domestic opposition. The Israeli political deadlock prevailed.

Some years later, and after many dead Israeli occupation troops and many times more dead and homeless Lebanese, the Israelis gave up. After Ehud Barak campaigned successfully for the office of prime minister on a platform that called for getting out of Lebanon (c.f. Obama on getting out of Iraq), the Israelis withdrew unilaterally. Most Israelis were relieved that their government had finally faced up to reality.

The diplomatic route we tried earlier would have saved lives and would have left Lebanon with a much better relationship with both Israel and Syria. It also would have reduced many of the causes of anti-American terrorist activity in Lebanon. Alas, the diplomats lost out to the politicians at the time. It would not be the first time that U.S. diplomats failed to cut the Gordian Knot of Israeli-Lebanese-Syrian relations.

Throughout the diplomacy in which I was involved in the early and mid-1980s, Peres showed great vision, even as he was cautious about getting too far in front of Israeli public opinion. He clearly did not want to lose completely his well-deserved reputation at the time as a hawk in the Labor Party, of which he was one of the founders. His dramatic role in negotiating for peace with the Palestinians and with Jordan was still to come.

Peres’ close working environment was always hyper-active. His presence constantly transmitted restlessness, edginess and dissatisfaction. There was always something more to be achieved, another task to complete, and a new plan to devise.

At the height of the peace process in the mid-1990s, Peres was the foreign minister and master of the “Oslo II” negotiations, detailing the interim arrangements for Gaza and the West Bank. I was advisor to Amb. Uri Savir, the director general of the MFA, who was the chief negotiator of Oslo I and Oslo II. Some 200 of us, Israelis and Palestinians, were isolated at the Hilton Taba hotel on the Israeli-Egyptian border. Working around the clock for weeks, endlessly debating lines of text on issues such as water rights, border controls, sharing the electromagnetic sphere and drawing fine lines on small scale maps.

It was a collective and individual, physical and mental endurance test, highly competitive and obviously politically loaded. After a few days and nights, around 4am, the corridors of the 10th floor were gradually blocked. Exhausted negotiators simply collapsed on the carpeted surface, attempting to regain their senses with a quick nap. Suddenly, from the end of the corridor, a small group stormed in, with Peres’ familiar silhouette leading the pack. As he attempted to make his way, he stumbled on one of the bodies on the floor.

“What the hell are you doing?” his unmistakable voice pierced the air. “Get back in the room and negotiate! Now! Right now!”

The corridor was immediately awakened and everyone rushed to their seats, fearing Peres’ wrath. In the weeks and months that followed, his tenacity and uncompromising leadership pushed all of us, Israelis and Palestinians, over all hurdles and onto the successful conclusion of negotiations.

Like many Israelis, my army training taught me something about perseverance, but this was something else. This lesson in the meaning of "Pereseverance" as a key to peacemaking has stayed with me ever since.