Is the Middle East next on Putin’s agenda? What the US can do to prepare 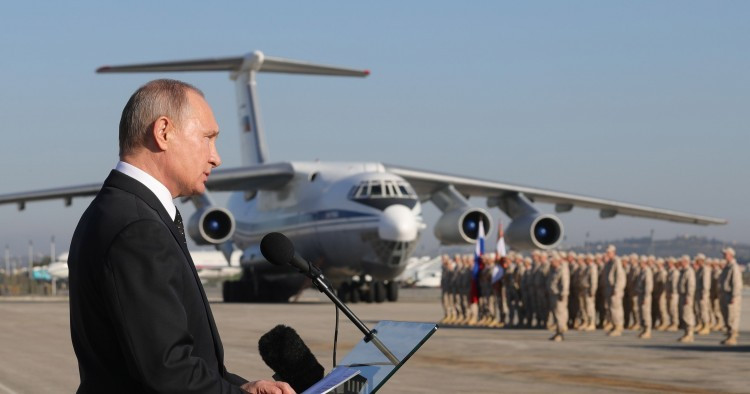 Conventional wisdom has it that the conflict in Ukraine will lead the United States to bolster its military presence along NATO’s boundary in Eastern Europe, with a concomitant downscaling in the Middle East. While presenting a robust front in support of NATO is of course critical, it would be a mistake to do so at the expense of the U.S. military presence in the Middle East at a time when it appears likely that Russian President Vladimir Putin has chosen the region as the venue for the next moves in his campaign to marginalize the United States.

In the last year, Russia has moved strategic bombers to western Syria (from which it can hit targets in Europe), warned Israel against conducting strikes in Syria, and started mounting combined air patrols with the Syrian air force. Incidents of aggressive Russian aerial maneuvers that bring U.S. and Russian aircraft into close proximity have become increasingly common.

All these indications should be warning signs for Washington, offering the opportunity to pre-empt rather than react, if the political will exists to do so.

Why is this the case? Well, to begin with, Russia does not separate the world into compartments the way the United States government does. For Russia, Syria is an integral cog in its global campaign to displace the United States — one in which the United States will again be presented with the choice to escalate or step down.

The next flash point

Russia's 10,000 troops in the country are not there simply to bolster Syrian President Bashar al-Assad. The Russian military presence embeds it in the geopolitics of the Middle East and grants it ready access to the region. From Syria, the Russian military can project power not just into Crimea and Ukraine but all of southern Europe, thus threatening NATO's southern flank. The Russians are quite open about this objective. Since last May, Russian Tupolev Tu-22M3 Backfire bombers have staged at the Hemeimeem airbase in western Syria, from which they can strike any target in the Mediterranean Sea. It didn’t require Western intelligence analysts to figure this out — the Russians themselves announced the move, and its significance, in the press.

Russia’s friends in the region

Russia’s strong position in the Middle East is most clearly evidenced in the close military-to-military relationships that Moscow has developed with the key players — arguably more so in recent years than the United States. Israel to this point has worked closely with Russia over Syria and other areas of mutual interest. The UAE joined Russia in its backing for the attempt by Gen. Khalifa Hifter and his rebel army to wrest power from the Libyan government, which was supported by the West. Saudi Arabia and Russia signed a Military Cooperation Agreement last August. The agreement came in the wake of the U.S. withdrawal of its Patriot and Terminal High Altitude Air Defense (THAAD) anti-air defenses and gives Russian defense contractors a foothold in the lucrative Saudi arms market.

Among countries in the Middle East, Iran is likely to emerge as the greatest beneficiary of the Ukraine conflict. Russia’s new role of international pariah points to a natural partnership with the Islamic Republic. Both countries are heavily sanctioned by the West, and thus have little to lose — and both want to undermine the United States. A worst-case scenario would have Putin advise Iran to quit the talks in Vienna and sign an agreement with Russia whereby the latter provides the technology required to create nuclear energy. Even if this doesn’t happen, it is likely that Russia will provide more overt support to Iran, and the latter — emboldened by this partnership — will step up its proxy campaign against other regional players and the United States.

What this means for US military posture

War in Europe would normally suggest a pooling of U.S. forces in the region, accompanied by a reduction elsewhere. However, it is the Middle East where the United States needs to prepare to counter Putin’s next moves.

Washington needs to move fast to strengthen ties with Middle Eastern leaders, while stepping up military-to-military engagements with nations in the region. Such engagements do not require a significant relocation of forces, only a reprioritization of time and resources. It is now time to force Israel and the UAE to take sides, but with an emphasis on enhanced military cooperation with both countries in return. The United States should reach out to Turkey to invite greater cooperation on the ground in Syria as well.

Military planners need to come up with a contingency plan to respond to a flash point between U.S. and Russian forces in Syria.  The lines of direct communication between the two militaries, previously used to de-escalate tensions, will likely no longer be available. The chance of a clash is now greater than ever, and the United States can’t be caught flat footed when it does happen. Nor must it back down too quickly — escalate to de-escalate should be our watch phrase in future confrontations with the Russians. U.S. Central Command (CENTCOM) should also be looking at how to give U.S. forces a position of advantage in Syria. Even a token military presence in Syria carries significant moral value. Instead of downsizing or withdrawing U.S. troops in the country, now would be a good time to reinforce them — if only as a sign of resolve that the United States is still in play. However, a position of advantage doesn’t necessarily mean more boots on the ground. It might mean instead arming forces that are there with the weapons systems that pose the greatest threat to Russian troops: electronic warfare, drones, long-range precision fires, and anti-tank and anti-aircraft missiles, for instance.

The United States needs to message Iran unequivocally that any further support for drone or missile attacks on U.S. partners or interests will result in retribution. Until this point, Iran has been able to shelter behind a thin guise of separation from its various proxy forces, but no more. Divide and conquer should be the U.S. approach here, before Iran can take advantage of its position with Russia.

All indications are that that Putin’s next steps will be to consolidate Russia’s position in the Middle East. The United States can either plan now to preempt him, or simply hope that this is not the case. And as military planners are fond of reminding one another, hope is not a course of action.

Andrew Milburn retired from the Marine Corps in 2019 as the Deputy Commander of Special Operations Command Central, the headquarters responsible for all US special operations in the Middle East. Since retiring, he has written a critically acclaimed memoir, When the Tempest Gathers, and articles for a number of publications. He is on the Adjunct Faculty of the Joint Special Operations University, a co-host of the Modern War Institute’s Irregular War Podcast and Irregular War Initiative, and a Non-Resident Senior Fellow with MEI’s Defense and Security Program. The views expressed in this piece are his own.