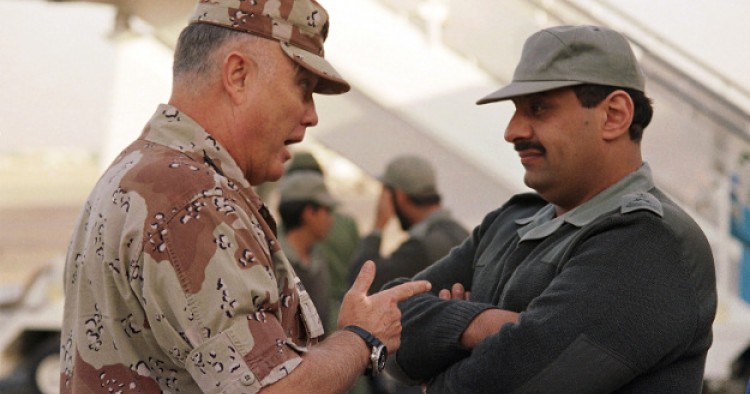 Twenty-five years ago, on August 7th 1990, an American interagency team walked into an urgent meeting with King Fahd of Saudi Arabia, not knowing what would happen. A week earlier Iraq had seized Kuwait. The Americans feared that the Iraqi Army might keep going, seizing the Saudi oil fields. As a result of decisions made at that August 7th meeting, Iraq and terrorism have dominated American foreign policy for three decades and continue to do so.

The American team was lead by then Secretary of Defense Dick Cheney. He was accompanied by a little known U.S. Army general from what was then an obscure military command, Norm Schwarzkopf of CENTCOM. I was along to represent the State Department, where I served as an assistant secretary. We sat on the King’s right in his gilt covered majlis. On his left were several of his brothers who were Saudi cabinet members.

Cheney asked General Schwarzkopf to brief the King on what the Iraqis could do with the large military force they had just inserted into Kuwait. With large maps and photos, the General showed that the Iraqi tanks could be in Dhahran, the Saudi oil city, in a matter of hours.  Cheney then played his card, an offer from President George H. W. Bush to deploy thousands of U.S. forces to defend the Kingdom. The U.S. forces would leave when the Iraqi crisis passed or at any time the King wanted them to go; we sought no permanent military presence, Cheney assured Fahd.

The King turned to his brothers and solicited their reaction. They were unanimously opposed to an American intervention, to U.S. forces being on the soil of the land of the two holy mosques. There had been much internal criticism of the decision to bring French forces in eleven years earlier to retake the Holy Mosque of Mecca from religious fanatic terrorists. It sounded to us from the brothers’ discussion that the King would reject the American offer.

Fahd talked at length about how hard he and his family had worked to build a modern country from a backward desert collection of tribes. I wondered where he was going with the monologue when he finally stopped, took a breath, and then said, “Tell President Bush to send the forces. Send them all. Send them quickly. I accept his word that the forces will leave when this is over.”  The decision and its clarity surprised us.

Moments later, as we were headed toward our motorcade, Cheney called a huddle inside the entrance to the King’s Palace. “There are cameras out there, reporters looking to see our facial expressions, to see if the King approved the deployment of U.S. troops. Be poker faced.”  As we emerged into the thick, humid air, our glasses instantly fogged up and we struggled to find our way to the cars. Far from poker faced, we simply looked confused.

Once at the Guest Palace, Cheney tried to call President Bush. His military aide, an admiral, struggled to get a secure phone to work. Finally, the admiral got through to the White House. He was told that the President was in a meeting. Cheney, usually placid on the outside, erupted, “We’re about to go to war, I need to talk to the President.”

Their conversation was brief. When it was over, Cheney turned to Schwarzkopf and told him to start moving the forces.  CENTCOM had a plan, but even its commander was unsure the U.S. military was capable of carrying it out with such little preparation. Within hours, the 82nd Airborne was on its way, as were hundreds of U.S. Air Force fighter-bombers. Schwarzkopf observed to us that the rifle-carrying airborne unit on its way to Dhahran would just be “speed bumps” if the Iraqi tanks rolled down the coast. The next day I flew to Oman, the UAE, and Bahrain to gain their approval for the deployment of hundreds of additional American aircraft, some of which had already departed from their bases in the United States.

A few months later, the United States had half a million military personnel in the Gulf. After weeks of pounding Iraqi forces from the air, the American-led coalition defeated the Iraqi Army in four days of ground combat. Faced with the option of moving on to Baghdad to unseat Saddam Hussein, President Bush and his advisors, including Secretary of Defense Cheney, declined. In their discussions, they agreed that forcing Saddam Hussein from office could result in the disintegration of Iraq into factions and regions.

While most American forces were re-deployed to the United States, where many were de-mobilized, some stayed in Saudi Arabia. The continued presence of “infidels” in the Kingdom further stimulated a Saudi, Usama bin Ladin, to plan a terrorist movement against America and the Saudi King. That movement, al Qa'ida, attacked America on 9-11 a decade later.

As part of the 1991 Iraqi surrender agreement, a UN team moved into Iraq to destroy weapons of mass destruction and to insure the WMD programs were not re-initiated. While the Iraqi weapons were destroyed, the on-going monitoring proved to be a source of on-going friction which caused the United States to attack Iraqi facilities. Ultimately, the fear of Iraqi weapons of mass destruction was chosen by the George W. Bush administration as the justification for another U.S.-led war with Iraq, the disaster in which thousands of Americans were killed or badly wounded. That second Iraqi war caused Iraq to disintegrate and religious fanatic terrorists to gain control of large cities.

Shortly after the first Iraq War, the Saddam Hussein government moved to suppress the Kurdish ethnic group in the north of the country. The United States threatened to re-initiate hostilities unless the Kurds were left alone, effectively separating the north from the rest of Iraq.

The rise of al Qa'ida in the 1990s, the U.S. invasion of Afghanistan, the second US.. war with Iraq, the rise of ISIS, all followed that August 1990 decision to deploy large U.S. forces to the Gulf. There were many social and political pressures that contributed to the upheaval in the Arab and Islamic world, but the continued U.S. military presence in the region and the way those U.S. forces were used, were major contributors. This chain of events also contributed to the Arab Spring and the creation of failed states in Iraq, Yemen, Libya, and Syria. Taken together, these events caused the deaths of hundreds of thousands, turned millions of people into refugees, and cost trillions of dollars.

So, was the decision to send U.S. forces to the Gulf in 1990 wrong? I think not. President George H.W. Bush was right to act to prevent one nation gobbling up another, right to force Iraq to end its programs of WMD. The errors that America and others made subsequently were not inherent in the decision to conduct the first Gulf War. We did not, for example, have to leave forces in Saudi Arabia. Certainly, we did not have to invade Iraq in 2003.

Asking how history would have been different if things had been handled in other ways can be fascinating, but we cannot redo history. Thinking about recent history, however, can give us perspective to understand where we are now and what decisions we should make in the near future. Thus, it is worth remembering that three decades ago there were few U.S. forces in the Middle East and we had seldom been involved in combat there. All of that changed, beginning on August 7th, twenty-five years ago, with a decision in Jeddah.