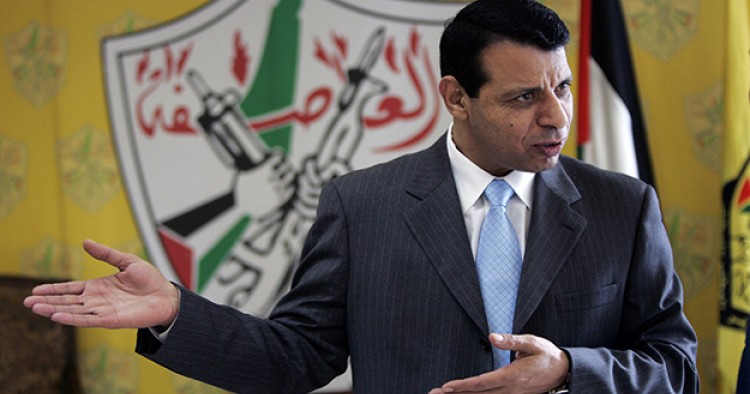 Mohammed Dahlan is making a comeback, and not for the first time since his ignominious ouster from Gaza almost eight years ago, when the Palestinian Authority (PA) forces he was leading as the PA’s security chief were routed by Hamas. These days, the 53-year-old, who grew up in the poorest of Gaza’s refugee camps, is seeking to do well for himself by doing good for Gaza.

Dahlan’s continuing efforts to remain a player after his 2007 defeat and subsequent falling out with PLO Chairman Mahmoud Abbas and the Fatah movement he leads offer a window into the tumultuous, fractured state of Palestinian politics today and the central role played by outside actors in Palestinian affairs.

Gaza is in shambles. By every indicator, this sliver of Palestine is in a headlong race to the bottom. UN Secretary General Ban Ki-moon and Arab League chief Nabil al-Arabi recently chastised the international community for its failure to follow through with $5.4 billion, which was pledged last October for Gaza’s reconstruction after Israel’s summer 2014 “Operation Protective Edge” caused nearly $8 billion in damage and killed more than 2,100 Palestinians.

But the fault for Gaza’s increasingly perilous predicament does not lie solely with the international community.

Egypt and Israel, each for its own reasons, are keeping Gaza economically isolated and  all but shut off from humanitarian aid, preventing not only the reconstruction of infrastructure destroyed by Israel but also trade across borders; each prevents trade from operating freely and transparently.

Nor are Palestine’s leaders offering a way out of Gaza’s difficulties. The debilitating contest between Fatah and Hamas shows no sign of abating, notwithstanding their agreement to form a unity government of technocrats in June 2014.

Gaza’s travail can, however, present opportunities. And no Palestinian official has proven more adept at taking advantage of the failure of Palestinian leadership and the obstacles put up by Palestine’s neighbors than Mohammed Dahlan.

Dahlan rose through Fatah ranks in Gaza and was an early favorite of Yasir Arafat. His role as Arafat’s intelligence liaison with Israel before and during the early Oslo years was the key to his personal fortune, now estimated to be $120 million, and to his spectacular leap into the political limelight.

The youthful Dahlan was a regular visitor to Washington in the 1990s. He negotiated directly with Bill Clinton at the Wye Plantation talks in October 1996, and George W. Bush met him on at least three occasions. After talks at the White House in July 2003, Bush publicly praised him as “a good, solid leader.”

Dahlan eventually failed both the Israelis and the Americans, marked by Hamas’s growing power in Gaza, its victory in the 2006 parliamentary elections, and the subsequent expulsion of PA forces from Gaza in 2007.

In the years since Dahlan’s fall from grace, he has done well for himself brokering deals, including reportedly arms sales, around the region. He recently became a citizen of Serbia. He has used Montenegro, where he also has citizenship, as the base of his real estate, management, and consulting operations. He can also claim the UAE’s Sheik Mohamed bin Zayed al-Nahyan as a key patron.

Dahlan has been a regular visitor to Cairo since Abdel Fattah el-Sisi’s rise to power. The new government has signaled its interest in favorably raising Dahlan’s public profile, both as an expression of Sisi’s interest in cementing relations with the UAE and in challenging PLO chairman Mahmoud Abbas. Dahlan is symbolic of a younger generation of Palestinians who have chaffed under the ineffective leadership of the almost 80-year-old Abbas, for whom Dahlan is persona non grata.

“I've heard that Cairo thinks Abbas needs to loosen up a bit on Gaza because otherwise the pressure will boil over, and it may be that [Egypt is] using Dahlan as a conduit in this respect,” says a longtime observer of Palestinian politics.

Despite his considerable financial success, Dahlan continues to see a political role for himself in Gaza and beyond. To this day many of his former colleagues, still working for the PA in Gaza, facilitate relations and act as liaisons between Hamas and Israel, notably on the border at the Erez and Kerem Shalom crossings. Hamas appears to see current advantage in fostering ties with Dahlan, despite the fact that he at one time led an often-brutal campaign against it. Hamas no doubt still distains Dahlan, but is prepared to cultivate him at Abbas’s expense and to enable him to expand his charitable and political activities in Gaza in the hope that it may help Hamas win back some favor in Cairo and the Emirates.

“It’s clear Dahlan and Hamas are flirting with each other against Abbas,” says the observer. “Dahlan still basically controls Fatah in Gaza, and I'm sure he has persuaded the UAE that he can use [its] money and resources to retake control of the entire Strip,” he adds.

In Gaza, Dahlan and his wife are making use of the UAE-based charity Khalifa to disburse cash to residents seeking to recover from the war and who have been left stranded by the shortcomings of the PA and the lagging international aid effort.

“Everybody knows he's corrupt and maneuvering only to generate [money],” says a former top Israeli security official. “No one thinks [his return to the spotlight] is a serious enterprise.”

Indeed, no one knows better than Dahlan, who once declared his interest in being “King of Gaza,” that wielding power can open the door to riches.

The way forward for Palestine: Fatah, Hamas and Dahlan

The Palestinian Quest for Reconciliation: Can it be Achieved?