Morocco’s new government lays out budget priorities, but can it pay for them? 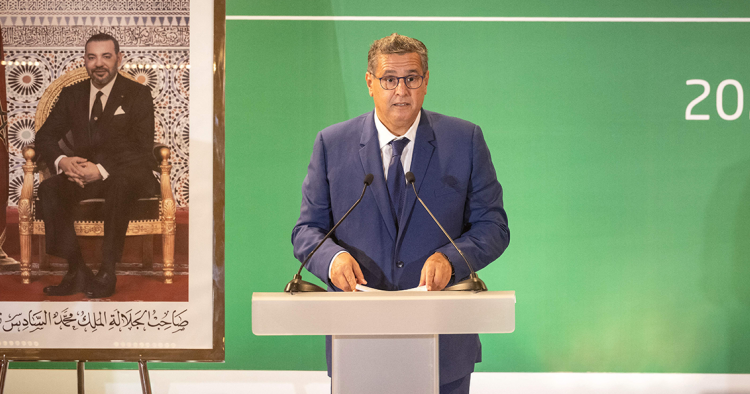 After two months in power, Morocco’s new government has indicated that it wants to prioritize social development and post-pandemic recovery as the country reels from the prolonged impact of COVID-19. However, macro-economic stabilization, constrained financial resources, and increasing defense spending are limiting the extent to which the state can effectively pursue and finance much-needed social development plans.

Even as the government imposes new lockdowns and travel restrictions to prevent the spread of the Omicron variant, it is struggling to balance this with a focus on economic recovery. The course for this recovery is charted under the broader framework already identified in Morocco’s New Development Model. The development framework was unveiled in May 2021 after nearly a year and a half of consultation and study. The genesis of the development model was in 2019, when, while commemorating his 20th year on the throne, the king acknowledged the need for sounder management of public affairs, greater human development, and more inclusive economic development. These calls echo the population’s own demands as voiced in protests over the past decade, including in the Rif in 2016 and in Jerrada in 2019, among others.

The government wanted the 2022 finance law and budget to reflect these efforts to build stronger social safety nets, improve service provision, provide jobs, and put social development at the forefront of economic policies. The budget increases spending from $52 billion to $57 billion and focuses on social development and safety nets, including universal health care coverage, financial assistance for the poorest groups, and prioritization of access to health care and education in marginalized areas. Specific details on these plans are scarce, however, and budgets for the programs are not substantially higher than in previous finance laws. Furthermore, the government has halted previous plans for subsidy cuts and reforms given the growing fragility among segments of the population, which further limits the availability of resources. The government has also said that it wants to create 250,000 jobs in two years in the private sector. What is clear in the finance law is the scarcity of details pertaining to social protections, the limited resources to finance youth employment and investment plans, the increase in defense spending, and the extent of the country’s reliance on foreign debt.

A key issue remains how the government will cover the costs of these promised projects after the limited economic growth of the past few years and the negative growth and increased state spending and borrowing during the pandemic. The growth rate promised by the Moroccan government decreased from 4% to 3.2%, reflecting more accurate economic projections. To address this, the government raised the budget deficit to 5.9%.[1] The average annual deficit recorded between 2012 and 2019 is 4.5% of GDP, which means that each year the government has needed 4.5% of its GDP in external funding to cover its budgetary expenses. This has contributed to increasing Morocco’s debt to GDP ratio, which by 2020 had reached 94% of GDP. Also during this timeframe, Morocco has recorded low rates of economic growth, even as demand for social support programs has increased. Morocco’s average GDP growth between 2010 and 2020 was 3.3% with lows of 1.06% in 2016 and -7.1% in 2020. Even as it seeks to boost spending by an additional $4.3 billion, the government has not raised revenues to offset this and the additional funding will come from issuing debt.

The social protection projects promised by the government are raising social expenditures, at a time when the economy has not yet recovered from the effects of the pandemic, further straining the state budget, which suffers from a structural deficit that has persisted for the past 20 years. The budget also assumes that the inflation rate will be in the range of 1.2%, a figure that seems rather optimistic given that rates are increasing steadily in advanced economies and rising commodity prices could lead to “imported inflation” in the coming months.

The state has great ambitions to boost private sector investment with an eye to increasing export capacity, thereby addressing the country’s trade deficit. On Feb. 4, 2021 the government established the Mohammed VI Fund for Investment to boost investments in key sectors, including manufacturing, agriculture, real estate, and tourism. The fund has a target budget of $15 billion, although it remains unclear where this funding would come from. Despite reforms to improve Morocco’s business climate and Doing Business Index indicators, and despite the growing foreign direct investment into specific sectors such as manufacturing, the kingdom has still not reduced the heavy reliance on public investment.

In the same vein, the state is creating investments funds specifically geared toward young people. Youth between the age of 15 and 35 represent 38% of the population and the unemployment rate in this group is over 30%. Along these lines, the new budget puts forward a new program called Forsa (“opportunity”) dedicated to financing youth projects. The program will allocate $135 million for 50,000 projects, which amounts to just $2,700 per project on average — a meager sum detached from the realities of financing enterprises or startups. This program is an example of how access to financing, whether from the government or the banking sector, is the single biggest hurdle facing private enterprise in the country, and therefore a major challenge to the growth of the private sector.

In the past, Morocco has relied on foreign funding to balance its budget and to support new programs. However, it is not clear if the country will be able to do so once again. The Biden administration has signaled that investments promised as part of the Abraham Accord Funds are now on hold and might no longer be available, while the support provided by the Gulf states has decreased due to diplomatic disagreements and changing investment priorities among Gulf governments. The first foreign visit of the new prime minister was to Saudi Arabia to attend the "Green Middle East Initiative" summit, but there is little talk of direct assistance from Riyadh so far. The lack of financial resources will make social projects difficult to achieve during the next year, especially as the country seeks to balance its macroeconomic indicators in the short term.

Furthermore, the growing tension with Algeria will also have economic implications — the least of which is the impetus to increase defense spending. Under the new finance law, defense spending rose by 6% compared to last year to reach $5.43 billion. Of that total, $64.8 million is allocated to the creation of an additional 10,800 new jobs within the defense sector, which represents over 40% of the new jobs promised in the law. Morocco’s energy costs are likely to rise as well, as the country is forced to seek costlier gas imports since the Europe-Maghreb Gas Pipeline agreement, under which Algeria supplied gas to Spain via Morocco, expired at the end of November 2021.

The new government's first finance law and the budget it puts forward does reflect a desire to prioritize social development, but it neither provides the resources nor the programs necessary to address the lag in social development or the impact of two difficult years under the pandemic. While the prospects for job creation remain modest for 2022 per the government’s plan, investment is still hampered by COVID-19, the lack of resources, and weak governance. At the same time, expectations regarding economic growth remain minimal, with the IMF predicting a 3.2% growth rate, in line with trends over the last decade, while marginalization, disenfranchisement, and social demands all continue to grow.

Rachid Aourraz is an economist and co-founder of the Moroccan Institute for Policy Analysis (MIPA), as well as a senior analyst. In addition, he is also a non-resident scholar with MEI’s North Africa and Sahel Program.

Intissar Fakir is a senior fellow and director of MEI’s North Africa and Sahel Program. The views expressed in this piece are their own.

Morocco’s New Challenges as a Gatekeeper of the World’s Food Supply: The Geopolitics, Economics, and Sustainability of OCP’s Global Fertilizer Exports