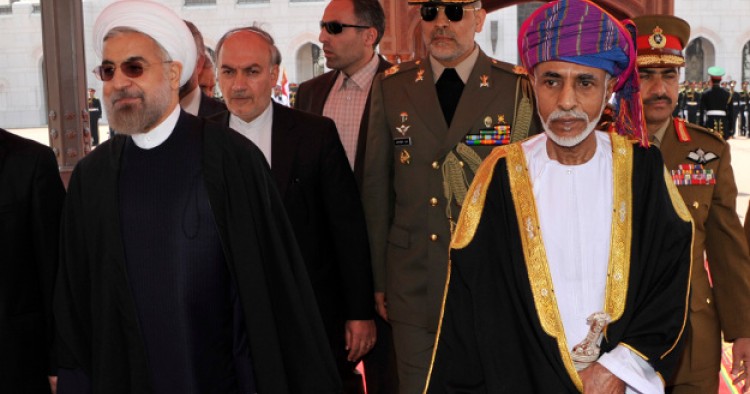 This article was co-written by Sigurd Neubauer. Read the full article on Foreign Affairs.

Most observers of the current nuclear negotiations with Iran have focused on the scope and timing of sanctions relief. Tehran insists that sanctions be immediately lifted once a final deal is reached; Washington seeks a gradual phase-out. Lost in the discussion is the fact that few countries have as much at stake in the outcome as Oman. For this state on the horn of the Arabian Peninsula, the diplomatic and economic risks are high.

Oman’s leader, Sultan Qaboos bin Said, has been at the forefront of mediations between Tehran and Washington for the past decade, helping broker the interim nuclear agreement in November 2013. His involvement can be directly attributed to Oman’s historic relationship with Iran, which includes the Shah’s support to help quell the Dhofar rebellion in 1962–76 and his support for Qaboos’ bloodless palace coup, in which his father was ousted, in 1970. In addition, Iran and Oman look to substantially expand trade links following the lifting of Western sanctions, which would unlock significant economic rewards for both.

Energy plays a large part in this calculus. In March 2014, the two states struck a landmark commercial agreement during Iranian President Hassan Rouhani’s visit to Muscat. Under the pact, Tehran will export 350 billion cubic feet of gas per year to Oman starting in 2015, via a strategic 420-mile gas pipeline under the Persian Gulf. The deal, which will last for 25 years, is estimated to be worth $60 billion. Separately, Iran announced its intentions to invest $4 billion in Oman’s new port at Duqm and promised to do the same with several other infrastructure improvement projects.

Oman plays it safe on Israel