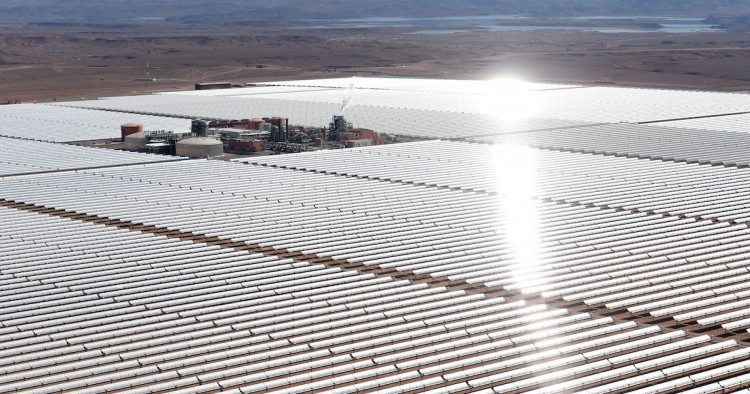 MENA countries are currently home to nearly 15% of the world’s installed energy storage capacity, but this total will need to grow to enable variable renewable energy systems to be integrated into the region’s power grids in a flexible and stable manner.

Governments in the Middle East and North Africa (MENA) region have pledged to meet ambitious renewable energy targets, driven by the need to reduce dependence on fossil fuels, enhance energy security, and cut greenhouse gas emissions. MENA countries aim to generate between 15% and 50% of electricity using renewable energy by 2030. Declining technology costs and a growing focus on green policies are creating a favorable environment for the deployment of renewables, especially solar and wind power. However, implementation of renewable energy has been slow in the MENA region, with an installed renewable energy capacity of about 10.6 gigawatts (GW), compared to a global total of 2,799 GW as of 2020. 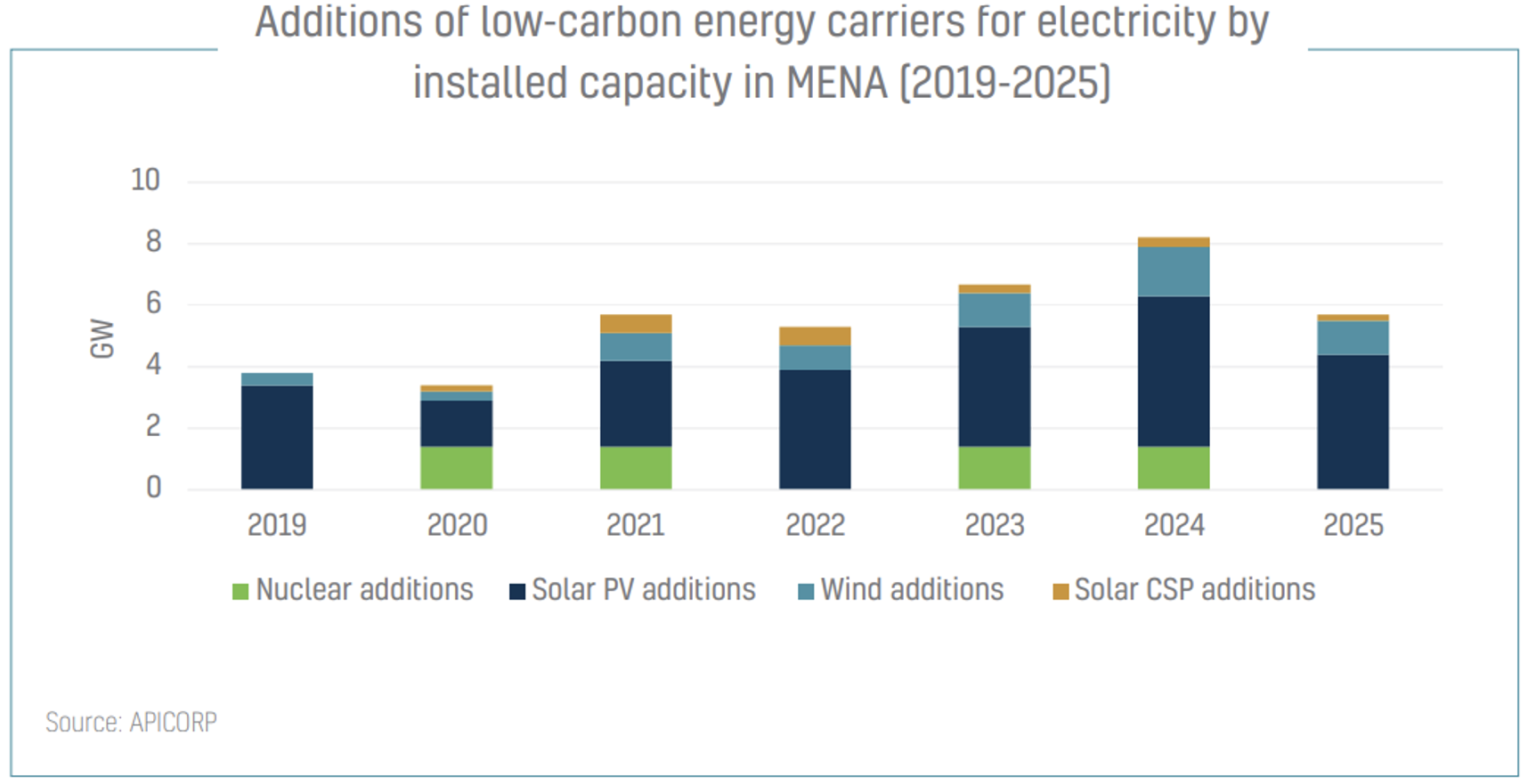 Energy storage systems (ESS) will play a key role in the increased integration of variable renewable energy (VRE) systems into the power grids. ESS will enhance the power systems’ flexibility and stability through capacity firming and other ancillary services, such as frequency and voltage regulation.

ESS can also be central to peak shaving — leveling out peaks in energy use — and stacking a spectrum of additional ancillary services. ESS provides dozens of services that could be stacked to maximize value depending on the power system and grid needs and requirements. These services are compensated differently depending on market needs. The stacking of services also enables revenue stacking, in addition to storage capacity payment, thus creating a favorable business case for ESS. Power system design has traditionally focused on expanding power generation capacity to meet growing electricity demand. This has led to a race to boost power generation across the MENA region, using mostly thermal energy, and averaging an annual growth rate of 7%. The continually increasing demand is driven by subsidies, population growth, and the need for ever more cooling and water. Power system design is currently shifting toward reduced peak load, which is critical for MENA countries to cut down the rate and pace of adding power generation capacity.

Countries in the region are taking steps to scale up their energy storage capacity, with 30 energy storage projects planned to be implemented by 2025. So far, completed ESS projects include pumped hydro-storage (PHS) — which constitutes 55% of the region’s ESS installed capacity, compared to 90% globally — and batteries, particularly sodium-sulfur and lithium-ion batteries, which are expected to grow from 7% to 45% of MENA’s ESS by 2025.

The drivers for ESS deployment vary across the region. Jordan, Egypt, Morocco, and most Gulf states are motivated by ambitious renewable energy targets. This mostly translates to utility-scale front-of-meter (FTM) applications — grid-scale energy storage connected to the generation sources or the transmission and distribution networks (T&D) — particularly via renewable energy-plus-storage auctions or co-location of wind and solar plus storage. Currently, FTM applications represent 89% of the ESS installed capacity in the region. However, for countries that suffer from frequent power blackouts, such as Iraq and Lebanon, significant power supply shortages create another impetus for ESS. This is mostly in terms of behind-the-meter (BTM) applications — electricity stored on-premises behind the consumer’s meter — that reduce the socioeconomic losses associated with blackouts.

Despite these drivers, ESS deployment in MENA is currently at about 1.46 GW, compared to  global capacity of 10 GW, or just under 15% of the total — equal to the battery storage in the U.K. Moving forward, governments, electricity utilities, and financing institutions will need to address several regulatory, financial, and market barriers to accelerate ESS and VRE deployment in the region.

On the regulatory front, not all MENA countries have issued comprehensive definitions or regulations governing ESS. The VRE targets have emphasized renewable energy without accounting for policies or targets for storage. It also remains unclear where ESS assets would fit into the power value chain: as part of generation, transmission, or distribution, or even shared across the value chain. The lack of comprehensive regulatory frameworks creates additional challenges for ESS deployment and increases investors’ risk aversion.

Other existing regulations — such as the net-metering scheme over flat rates — hinder the deployment of energy storage. Under this scheme, consumers may offset their utility consumption by injecting surplus on-site generated power back into the grid. With the exception of countries that experience significant blackouts, a flat-tariff scheme provides an incentive to implement small-scale renewable energy, but not BTM energy storage. A revision of the net-metering scheme, especially when the share of renewables increases, is required to incentivize distributed renewable energy projects coupled with BTM applications.

On the financing front, under-investment, high financing costs, and substantial subsidies costs limit the availability of financing for ESS projects. A regulatory framework that considers ESS to be part of T&D should allocate substantial investment for the grid network. The power sector receives the largest share of investments in MENA energy sectors, comprising nearly one-third of the $805 billion dedicated to 2021-25 projects. The bulk of these investments target the generation value chain, whereas only 8-12% are earmarked for T&D networks. Given that ESS is a relatively nascent and dynamic technology undergoing constant research and development, projects usually require a higher share of equity financing than conventional power projects. This increases the cost of utility-scale projects and requires direct governmental partnerships through state-owned enterprises. Moreover, despite the obvious need for ESS and reduced reliance on diesel generators in countries with significant shortage, these countries’ high risks increase the cost of financing and limit borrowing ability. It is essential that the private sector, the public sector, and multilateral development banks provide flexible financing for energy storage projects.

By contrast, energy subsidies — which exceed $40 billion per year in the MENA region — have burdened state budgets and hindered the deployment of low-carbon technologies. As the electricity tariff is not cost-reflective, the cost of energy storage is borne by the utilities, and consequently by governments. Hence, governments should provide incentives for ESS projects and promote public-private partnerships.

Policy and market tools can also be deployed to incentivize investments, such as tax credits, accelerated depreciation, direct equity ownership, and carbon credits. While restructuring the electricity tariff has been a challenge for MENA governments, achieving a more cost-reflective tariff where pricing varies based on time of use is critical for the financial performance of utilities and the economic viability of ESS.

On the market front, power market design and renewable energy auctions present their own challenges to the deployment of ESS. MENA electricity utilities are predominantly state-owned, vertically integrated, and characterized by the single buyer model (SBM). The SBM limits the prospects of energy storage investments, as it restricts the revenue stacking business model that makes any ESS project economically viable and attractive to investors. Unbundling elements of the power value chain would open the door for several producers to provide solutions to several off-takers, which optimizes the ESS business model.

Private sector engagement has been promoted through renewable energy auctions in MENA. These have attracted investments and led to competitive prices, yet they have prioritized the lowest price among technically compliant offers. Since energy storage provides value through stacked services in addition to storage, the final bidding price cannot be considered the sole award criteria. The deployment of ESS requires a review of the auction design, evaluation, and award criteria to include elements of specific ESS targets. Additionally, these auctions usually have tied off-takers (i.e., governments) with costly take-or-pay clauses in long-term power purchase agreements. This results in governments paying for electricity even when supply is curtailed, which is common for intermittent VREs. Moving forward with ESS deployment requires auctioning renewables-plus-storage assets, enabling off-takers to procure dispatchable electricity.

Several MENA countries have a competitive advantage in the deployment of ESS, especially renewables-plus-storage, due to ample renewable energy sources, low cost of procurement, and relatively easy access to finance. Although the range of applications and stacked services are case specific, certain regulatory, financial, and power market barriers are common across the region and need to be addressed to enable more widespread deployment of ESS and the scaling up of VREs. Pairing VRE systems with utility-scale ESS will be central to meeting the region’s ambitious renewable energy targets and setting it on the path toward a net-zero future.

Jessica Obeid is an independent energy policy consultant and a non-resident scholar with MEI’s Lebanon and Economics and Energy programs.

Suhail Shatila is a senior energy specialist at the Arab Petroleum Investments Corporation (APICORP). The views expressed in this piece are their own.