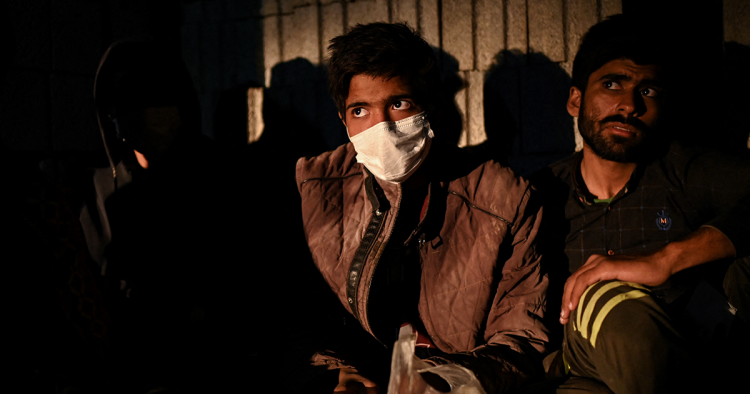 For the second time in the past two decades, a large number of Afghans find themselves escaping chaos. Twenty years ago, it was the American invasion of Afghanistan after the terrorist attacks of 9/11 that caused a large wave of refugees. More recently, the hasty American withdrawal from the country and the ensuing Taliban takeover have created another wave of refugees.

The international community now faces another refugee crisis, before it has even recovered from the previous waves from Syria, Iraq, Yemen, and Afghanistan, all of which resulted from military conflicts in the region. Further afield, there are also waves of refugees from Myanmar, Venezuela, and other countries. According to the UNHCR, one in every 97 people in the world is now forcibly displaced.

As described in an earlier article, the American withdrawal from Afghanistan and the refugee crisis it caused are inextricably linked to the broader competition between the U.S. and China. But the primary destinations for Afghan refugees are first Iran, then Turkey as a waystation, and ultimately the EU as the final stop. Therefore, this article will start with a discussion of the political dynamics in these countries and then move on to the competition between the superpowers.

From Afghanistan to Europe

Afghanistan shares borders with Tajikistan, Turkmenistan, and Uzbekistan to the north, Iran to the west, and Pakistan to the east and south. It also has a short border with China to the northeast. Of these countries, the one hosting the most Afghan refugees is Iran, where many pass through en route to Turkey and then Europe. As of today, Iran hosts around 780,000 registered Afghan refugees and 2.3 million undocumented Afghans. Given its own domestic economic woes and the impact of Western sanctions, Iran is in no position to take in more refugees and, in any case, most of those who fled Afghanistan to find a better life are not likely to find it under the Iranian regime.

The next stop after Iran, en route to Europe, is Turkey, which itself is also dealing with a massive refugee crisis. It is host to the world’s largest refugee population: a total of around 4 million, some 3.6 million of whom are Syrians, as of June 2021, before the American withdrawal from Afghanistan. While Turkey is usually not the final destination for either Syrian or Afghan refugees, many of them spend years there due to an agreement between Turkish President Recep Tayyip Erdoğan and EU leaders to prevent them from travelling onward to Europe, in return for which Ankara received billions in aid. Now both sides, Erdoğan and EU leaders, are negotiating a new deal that includes the Afghan refugees, and Erdoğan calls for “a global response.”

Erdogan’s call for “a global response” is mainly a reference to the European response. Many European countries are doing their best to keep the refugees out at what is a very sensitive time politically in Germany, France and Italy, the three biggest EU countries.

Federal elections will be held in Germany on Sept. 26. The refugee crisis of 2015 had a major impact on the previous elections in 2017, when the right-wing party Alternative for Germany (AfD), which opposes immigration and Islam, won the third-most seats in the Bundestag. Over the past two years, the party has been weakened, mainly because of internal struggles between the conservative-nationalist and the extreme nationalist camps. Beyond that, the issue of immigration has lost its centrality in German political discourse. Now, the new circumstances may play into the hands of the AfD once again. While German Chancellor Angela Merkel is pledging to accept 10,000 refugees in Germany, the conservative candidate vying to take over her role as chancellor, Armin Laschet, has stated that the unrest during the 2015 refugee crisis must not be repeated.

France, which has been suffering from a socio-economic crisis that has lasted throughout Emmanuel Macron’s presidency, will also elect a new president in a few months’ time. Marine Le Pen’s right-wing party, the National Rally, which opposes immigration and Islamism, suffered a major setback in the provincial elections in late June and can only hope a new refugee crisis might restore its fortunes ahead of the presidential election. To counteract Le Pen, President Macron hastened to declare that the EU must adopt a plan to manage Afghan migration, aid refugees in countries neighboring Afghanistan, and “anticipate and protect ourselves against major irregular migratory flows.”

In Italy, a refugee crisis may give new impetus to Matteo Salvini’s right-wing party, The League, and call into question the stability of the current national unity government. Italy’s political-legal system has been accused of trying to eliminate Salvini politically by prosecuting him for his decision to close Italy’s maritime borders to illegal immigration while serving as interior minister two years ago. A second trial is expected to take place in September. Despite these legal problems, Salvini has declared total opposition to opening Italy’s doors to “thousands of men, including potential terrorists.”

The US and China

The fact that some of the leaders of three major EU countries have a lot to lose from a new European refugee crisis will probably push the problem onto the superpowers, the U.S. and China. The U.S., which has a direct responsibility for this crisis, is already set to welcome tens of thousands of Afghans who were evacuated from Kabul, mostly before the beginning of September. The exact numbers are not yet certain, but it is already clear that many more Afghans are looking for a new home than the Americans are willing to accept. Even if U.S. President Joe Biden is willing to present a new American commitment to refugees, he faces strong opposition at home. If the U.S., which has strongest economy in the world and is the main cause of this problem, is not going to solve it, who else can?

China, the world’s second-largest economy and Afghanistan’s immediate neighbor, has used this crisis to attack Biden and U.S. foreign policy more broadly. The Global Times, a state-run newspaper, published an op-ed on Aug. 19 with the headline: “Afghan refugee controversy reveals US real nature – duplicity and hypocrisy.” Such headlines do not, however, mean that the Chinese Communist Party (CCP) will invite tens of thousands of refugees to Chinese soil. The only people from Afghanistan that China might let in are the Muslim Uyghurs who escaped to Afghanistan to flee from the Xinjiang internment camps or other points of conflict with the CCP and now are concerned for their safety under the new Afghan regime.

All these domestic and international dynamics, including the superpower competition, are affecting the lives of hundreds of thousands of refugees. It is clear and understandable that the U.S. itself cannot take responsibility for all the refugees, and neither can Germany, France, or Italy. But just as the American government combined forces with other democracies to overthrow the Taliban, it must once again work to find the right solution for all the people and countries involved, especially in the context of the Chinese and American struggle for global influence.