The post-Hirak presidency: Tebboune’s promises and achievements two years on 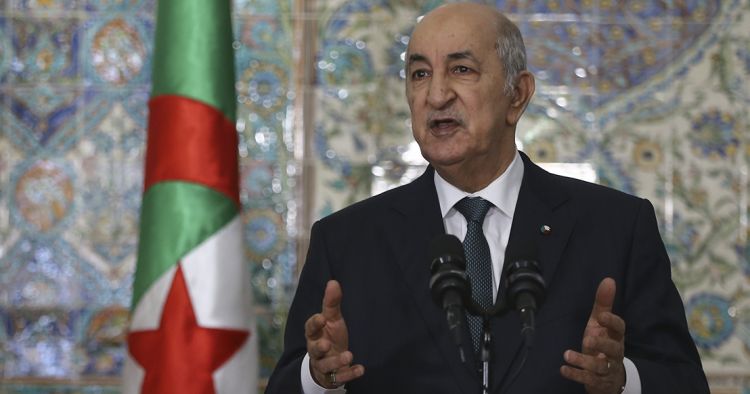 On Dec. 19, 2019, Abdelmadjid Tebboune was inaugurated as the eighth president of the Algerian Republic. He took office in the midst of a turbulent political climate following the 2019 popular uprising known as the Hirak. With the confidence of just 40% of the electorate, Tebboune faced steep hurdles in establishing his popular legitimacy. However, beyond his own support, his presidency was also the response of the Algerian political establishment, centered around the military leadership, to the country’s political crisis. As Tebboune reaches the two-year mark of his term as president, it is a natural time to review his administration’s progress so far and assess how its promises and achievements stack up.

During his presidential campaign, Tebboune made several important pledges. In responding to a destabilized political system and a society in revolt, he laid out key priorities and set major milestones, vowing to rebuild the country’s ailing institutions, revive its collapsing economy, increase the inclusion of its marginalized youth, and restore its place on the international scene. Tebboune’s political roadmap was endorsed by the country’s military leadership as it represented the only alternative available at the time. Therefore, the current term should be seen as a period of stabilization. Nevertheless, it is still important to evaluate the outcomes so far to understand both the establishment’s intentions and the future of Tebboune’s presidency.

The current administration’s vision for the “New Algeria” was founded on three major considerations. First, the unprecedented popular protests of the Hirak imposed legitimate demands for political reforms on Tebboune’s agenda. Second, the worsening living conditions precluded the success of any political process that does not also include a parallel effort to revive the economy. Third, the new leadership regarded foreign policy as a crucial tool to regain and maintain the legitimacy of the political system. These three areas have therefore shaped the narrative of Algeria’s political establishment since the election of December 2019.

In his inauguration speech, Tebboune vowed to engage with the Hirak in a spirit of trust. He projected himself as the president of all Algerians, which encouraged some political actors to accept his offer of dialogue. The demands for reform encapsulated by the famous protest slogan “All Out!” meant that Tebboune’s administration would have to change both personnel and policy. The 2019 uprising set a high bar for future officials and their stance on individual and collective liberties. By contrast, President Tebboune believed that Algeria’s political issues could and should be addressed through elections. Consequently, his political roadmap was focused on the renewal of legal frameworks and public institutions.

Constitutional reform was the current administration’s first step to address domestic concerns. The official narrative emphasized the need for a “constitution of consensus” before heading for snap elections. On Nov. 1, 2020, a new constitution that represented Tebboune’s vision of administrative, political, economic, and foreign policy reforms was approved in a popular referendum that was marked by the lowest voter turnout in Algeria’s history. Despite winning the confidence of no more than 24% of the electorate, the new constitution put in place the legal framework for significant shifts. It introduced the possibility of deploying troops abroad and it led to important new legislation, such as the electoral code. Thereafter, a new Algerian parliament was elected on June 12, 2021 with the votes of 30% of Algerians. The new legislative body is mainly composed of the old alliance between the National Liberation Front (FLN) and the Democratic National Rally (RND), vulnerable independent lists, and the Islamist blocs. Snap local elections followed on Nov. 27, 2021, which saw a slightly higher participation rate of 36%. The local leadership did not change much, however, as the same ruling alliance won once again.

The renewal of political institutions was essentially perceived as a strategy to change their autocratic practices. President Tebboune assured Algerians that he would respect and safeguard political and civil rights, and he released several nonpartisan political detainees through presidential pardons. However, Tebboune and his administration also adopted a radical interpretation of Algerian sovereignty — one that resulted in numerous limitations that threatened the work of political actors, journalists, and civil society organizations. This narrative of sovereignty focused on the old colonial history and targeted those who were seen as tools of a conspiracy against the authorities. In addition, Algerian officials repeatedly stressed conspiracy theories to justify any repressive measures taken. The president’s statements suggest that the authorities are only willing to accept criticism if it implicitly endorses their approach — a perspective likely adopted with the expectation of potential social discontent.

The explosion of Algerian society in the 2019 protests was an expression of political distrust and socioeconomic grievances, as Algeria’s large young population struggled to deal with worsening living conditions. To address this, the new head of the Algerian state promised to revive the economy and improve the condition of remote and marginalized regions. Tebboune’s approach focused on changing the country’s economic model and addressing inequality and economic disparities. The current administration has primarily targeted the gradually growing dissatisfaction of the silent majority, rather than actually trying to address the underlying causes of the economic crisis.

Since independence, Algeria’s economic model has been heavily dependent on the oil and gas industry, and this makes it highly vulnerable to fluctuations in energy prices. In 1988, for example, the country experienced an economic and financial collapse following the global oil crisis. Several decades later, little has changed and Algeria is still struggling to diversify its economy. President Tebboune’s plans envisioned facilitating investments while prioritizing local initiatives, but the COVID-19 crisis dealt them a major blow. The resistance of outdated bureaucratic structures that continue to block development projects has also constituted a serious barrier to realizing the president’s agenda. Tebboune himself admitted that corruption remains a significant impediment to economic development, alleging that different lobbies restrict investment projects. Still, the inability of the presidency to impose its authority on other state institutions, even when it comes to implementing presidential decrees and orders, raises questions about the likelihood that it will be able to carry out its economic plans.

The current limitations on economic development have prompted the government to take measures designed to directly benefit average citizens, as President Tebboune has worked to prevent another social uprising. He introduced changes to the taxation system and financial incentives for those impacted by the global pandemic. Nevertheless, this approach was also challenged by endemic corruption and rising prices. More importantly, the Finance Bill of 2022 included the lifting of state subsidies on necessary products. Even if the intention is to rationalize Algeria’s social welfare policy, the current informal nature of the market and the lack of advance preparation will invariably result in the marginalization of poorer segments of society. In this context, Algeria’s political and socioeconomic realities — and the challenges Tebboune faces on both fronts — have made foreign policy seem like an appealing alternative to boost the government’s legitimacy and appease the public.

Like former President Abdelaziz Bouteflika, President Tebboune has emphasized his plans for a return to the international scene, and foreign policy is seen as a vital asset for the new commander of the armed forces. Tebboune has not hidden his sovereigntist and traditional views. He repeatedly expressed his commitment to defend Algeria’s historical causes, including the Western Sahara and Palestine. This has led to the emergence of an assertive foreign policy approach that capitalizes on Algeria’s military and diplomatic corps. This new strategy aims to reclaim the country’s previous regional role and expand its international influence.

For decades, Algeria has been absent from the regional diplomatic scene. Although conflicts in neighboring countries posed a serious security threat, Algiers lacked modern and proactive policies to address them. As President Tebboune took office, he reasserted Algeria’s role in addressing regional crises. Algiers has repeatedly tried to regain its past diplomatic reputation and lobby for its regional vision, but the absence of Algerian leadership and new realities in the region have challenged its aspirations. The authorities are now looking at the next Arab League summit, set to be held in Algeria in March 2022, as an opportunity to showcase their diplomatic return, although recent disputes with Morocco could hamper this effort.

Algeria’s diplomatic return regionally goes hand in hand with its broader aim of regaining its international status. By adopting a sovereigntist narrative, Tebboune wanted to solidify his hold on power domestically through his diplomatic posture. The potential downsides of such an approach were evident in the recent tensions between France and Algeria. Algiers uses its principled foreign policy to expand its international presence. While the country’s history may prove helpful for the current administration in this respect, the region is changing and new geopolitical realities are difficult to address using Algiers’ traditional lenses. The political leadership is looking for a bigger role on different levels, but that will require concessions and a more pragmatic approach.

A period of transition

Tebboune’s presidency seems to be about attempting necessary reforms that have either been systematically postponed or are more broadly unachievable. His 2019 campaign promises about politics, socioeconomics, and diplomacy could prove to be too optimistic to be realized after such a severe crisis. In that sense, the current administration represents a tool of appeasement by the establishment to manage the social distress of the crisis. The divided ruling elite has no collective intention of providing a sustainable political alternative. Even if some centers of powers seek process-oriented changes, the past two years have shown that political reforms will be compromised unless they come as part of a national consensus. On the economic front, Tebboune’s revival plans have been focused on the apparent symptoms of the problem, rather than its underlying causes, and they face a host of challenges. Finally, the supposedly new foreign policy approach is in reality a continuation of Algeria’s historic doctrine, albeit in a very different geopolitical environment.

President Tebboune has finalized his institutional reforms, demonstrating the complexity of Algeria’s system and society. His term seems to be an informal transition period, which suggests that his continuation as head of state is not guaranteed. While Algeria may have achieved some stability since 2019, there are still worrying signs of an unsustainable situation that could blow up well before Tebboune’s term ends in 2024.

Morocco’s New Challenges as a Gatekeeper of the World’s Food Supply: The Geopolitics, Economics, and Sustainability of OCP’s Global Fertilizer Exports