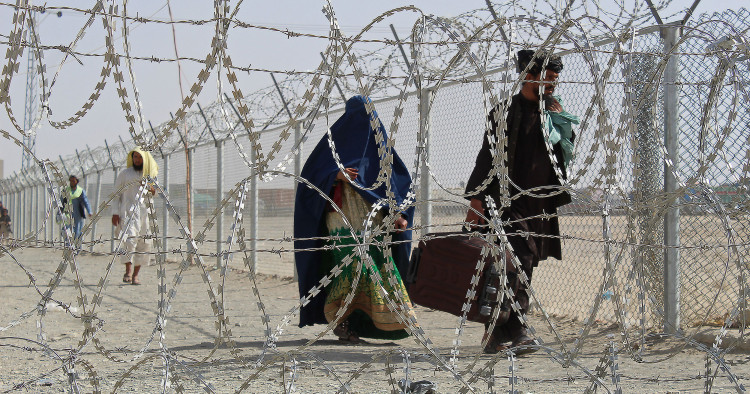 Frequent and violent border clashes have created political tensions between Pakistan and Afghanistan. This may surprise observers, since Afghanistan is being ruled by the Afghan Taliban, long supported by Pakistan’s security establishment. Recent incidents illustrate, however, that while the interests of Pakistan and its clients in Kabul may often converge, they are hardly identical. Divergent political ideologies, national histories, and strategic aims are driving them apart on many crucial issues.

Since the Taliban takeover of Afghanistan, cross-border attacks on Pakistani security forces have spiked, and the situation has deteriorated over the past few months. Pakistan’s recent airstrikes inside Afghan territory have only added fuel to the fire. According to reports from the Afghan government, on April 16, the Pakistani army carried out drone strikes in the border provinces of Kunar and Khost in eastern Afghanistan against exiled Tehreek-e-Taliban Pakistan (TTP) terrorists. While the mission targeted the TTP in retribution for its assassination of seven Pakistani soldiers just one day prior, 47 Afghan civilians also lost their lives in the operation. The Taliban warned Islamabad of “consequences” for its “invasions,” while Pakistan chided the Taliban regime for giving sanctuary to anti-Pakistan militants. Reluctant to further fray ties with the Afghan Taliban, Pakistan is yet to take official responsibility for the airstrikes in Afghanistan.

The Afghan Taliban’s return to power does not seem to have pacified Kabul’s behavior toward Islamabad. The Pakistani state, for its part, has failed to show the leadership, political skill, and strategic imagination necessary to end the cycle of jihadist violence. It may have dawned on Pakistan that something has gone horribly wrong. Could this realization set off some salutary soul-searching in Rawalpindi? Unlikely. Though it’s never too late to correct course, Pakistan remains a garrison state with jihadist strands so deeply interwoven into the fabric of the army that teasing them out is near impossible.

The TTP has used the border region as a safe haven, against which the Afghan Taliban regime has refused to take concrete action despite Pakistan’s repeated requests. The Taliban’s inability to establish a monopoly on the legitimate use of force may also be luring TTP fighters to Afghan soil. The TTP is not the only cross-border security threat facing Pakistan; Islamic State-Khorasan Province (ISKP) and Baloch fighters are also hiding out in Afghanistan. Despite these challenges, the Pakistan military is sticking to its traditional orientation whereby India is regarded as the principal military threat. The army chief Gen. Qamar Javed Bajwa’s attempts at a geopolitical realignment — potential counterterrorism cooperation with Washington and the pursuit of detente with India — seem to have foundered on Imran Khan’s reckless foreign policy, anti-American nationalist rhetoric, and resolute refusal to fade into political oblivion, as well as India’s tough stance against Pakistan.

Since the Afghan Taliban came back to power in Afghanistan last August, raids on Pakistani soldiers have escalated inside North and South Waziristan, exerting intense pressure on the security apparatus. Against this background, Pakistan’s retaliatory airstrikes targeting militant sanctuaries inside Afghanistan clearly underline Rawalpindi’s frustration with the Afghan Taliban’s inaction. Pakistan is hitting back because it doesn’t know what else to do. Even when Pakistan can act with little fear of repercussions, the question remains whether lethal force will compel the Afghan Taliban to heed Pakistan’s demands. To the contrary, retaliatory strikes against the TTP safe havens might very well harden the Taliban regime’s position.

Pakistan’s success in helping the Taliban to regain its grip on Afghanistan had made Rawalpindi confident of its ability to transform regional geopolitics more broadly. But the return of the Taliban in Afghanistan has only made things worse for Pakistan’s security establishment, as various splinter factions of the TTP are now reuniting. To understand why the TTP strikes such fear into the hearts of Pakistanis, one must remember that the group’s massacre of 150 people, mostly children, at a school in Peshawar in 2014 remains one of the deadliest terror attacks in the country’s history. In retaliation, the Pakistan military ruthlessly pursued the TTP, which severely undermined the group’s lethality and operational efficiency. The TTP now seems better organized and equipped, since many of its fighters, released from Afghan jails after the U.S. withdrawal, are launching well-coordinated attacks into Pakistan.

The TTP condemned Pakistan’s bombardment of Afghan territory, saying, “We challenge the Pakistan army to fight us on the battlefield instead of bombing oppressed people and refugee camps.” Gruesome though the TTP may be, most of the recent attacks against Pakistani forces in North Waziristan are the handiwork of Hafiz Gul Bahadur group, notorious for its close linkages with al-Qaeda and the Haqqani Network. Pakistan’s military planners must be feeling trapped in a pointless, escalating rivalry with their erstwhile proxies in Kabul, who share many ideological affinities with groups demanding the imposition of sharia law in Pakistan.

Tensions between the two countries come at a time when Pakistan is shouldering a tremendous burden for its diplomatic recognition of the Afghan Taliban’s regime and for lifting economic sanctions against them. But Islamabad’s overtures seem not to have mollified the Afghan Taliban, as the outstanding issues between the two countries make it difficult to create an environment in which friendship could flourish.

Terrorist sanctuaries are not the only bone of contention between the two countries. The Afghan Taliban feel aggrieved by border fences constructed by Pakistan along the disputed Durand Line to curb illegal cross-border movement, and have been gradually dismantling them at various places. Pakistan’s efforts include the construction of border posts as well as increasing the manpower of the Frontier Corps, Pakistan’s paramilitary force guarding the border with Afghanistan. The Afghan Taliban have made no secret of their desire to maintain an open border for the sake of Pashtuns inhabiting the region. Though previous Afghan governments had chafed at Pakistani attempts to erect fences, they had not made any serious efforts to stop construction. If the Afghan Taliban, in collaboration with the TTP, continue to sabotage the fencing, it would only exacerbate bilateral tensions.

Given Pakistan’s superior force, Afghanistan will do its best to avoid direct armed conflict with its neighbor. Meanwhile, Pakistan, which is currently facing economic disaster, political instability, and internal disunity, also does not want a showdown with Afghanistan.  Pakistan could, however, be jolted into action if Rawalpindi determines that nothing short of a military operation could secure its objectives on the other side of the Durand Line. Thus, open conflict is improbable but hardly inconceivable. Even if the guns remain silent, military brinkmanship could aggravate diplomatic paralysis. In brief, full conflict resolution through bargaining and compromise seems a distant possibility. The disputed border and terrorist sanctuaries remain Pakistan’s central dilemmas in Afghanistan; neither one lends itself to quick fixes.