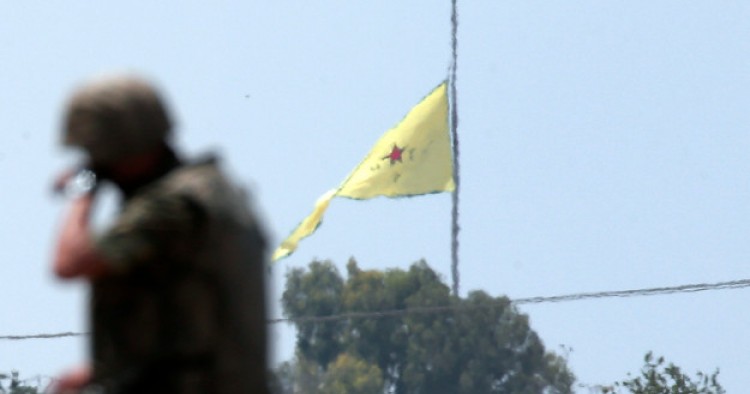 This paper is part of a MEI scholar series titled “The Middle East and the 2016 Presidential Elections."

On May 16, 1916, Britain and France with Russian acquiescence concluded what is arguably the most famous agreement in the history of the modern Middle East. The agreement represented an attempt by 19th century colonial minds to replace Ottoman rule in the Levant and Mesopotamia with a neo-colonial system of indirect Western rule. This imposed colonial construct rested on a series of arrangements—Sykes-Picot, Balfour, San Remo and the Mandate System. In the light of Woodrow Wilson’s Fourteen Points, the Crane Commission, and the call for “self-determination” of peoples, the colonial powers came up with a creative approach to pursuing their interests. These policies framed a Western political construct of governance, the contemporary collapse of which haunts the region and its Western creators.

Unable to deal with the complications of direct rule, first the British and then the French, after eliminating the short-lived Arab Kingdom of Syria (or Greater Syria), resorted to thinly veiled indirect rule. This necessitated the creation of artificial states—independently administered Ottoman provinces were cobbled together into Iraq, Syria, Lebanon, Trans-Jordan, and Palestine. Each of these political entities was fractured from top to bottom along ethnic, sectarian, and social lines. In Palestine, conflicts emerged between East Bank Bedouin backers of Abdullah bin Hussein al-Hashim, Palestinian Arabs, and increasing numbers of Jewish settlers. In mandate Syria, the French opted for a system that relied on Christian, Alawite and Druze minorities at the expense of a Sunni majority. In Iraq, the Sunnis, once part of the regional Sunni majority under the Ottomans, found themselves in the minority, ruled by an imported Hashemite – Faisal I, the former King of Syria, and a British client. 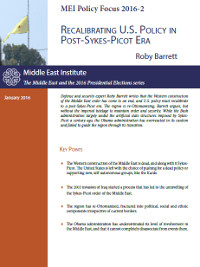 This colonial construct not only fit Western political and socio-centric views of a national state, but the outlook and rhetoric of indigenous Westernized elites also buttressed that perception. Each region had its own group of Westernized ‘nationalist’ politicians, each with their often-conflicting ideas about how their particular ‘state’ should be ruled. No matter how artificial the ‘lines in the sand’, the peoples within those lines became Syrians, Iraqis, Jordanians, Lebanese and eventually Israelis and Palestinians. As a result, in the Western-dominated aftermath of World War II, it seemed only reasonable that these entities would enter the new United Nations as nation-states. This idea fit the ideals of bipartisan American progressive thought and faith in self-determination for all peoples. The problem was the new ‘states’ did not match the reality on the ground. What emerged were artificial, truncated geographic entities in which elites, often dominated by minorities, enforced control through the security and military organs of the state suppressing any who threatened the established order.

The political stability and structure of the region required elites to possess strong coercive institutions and a willingness to use them. From the first military coup in Syria in 1949 to the present day, the ‘states’ increasingly relied on coercion to maintain control. This included states founded on democratic principles that increasingly relied on tough measures to protect their territorial integrity and control conquered territories and peoples. If the security apparatus failed or the military changed its allegiance, the government collapsed, often in spectacular fashion. When challenged, governments maintained power by increasingly violent means. Following the chaos of post-1975 Lebanon, some viewed the Saddamist and Assad dictatorships as extreme but necessary for the maintenance of order. In fact, Lebanon was the harbinger of things to come.

The 2003 invasion of Iraq began a process that returned the Levant region from Beirut to Basra to its historic state as a borderland, a march, between competing centers of power. The power vacuum created by the Bush administration in Iraq destroyed the artificial state structures that flowed from Sykes-Picot, shattering state control in the region. Not even a scorecard can keep the players in order. ISIS and too many Islamist and jihadists groups now struggle for control of the Sunni core from central Iraq to the gates of Damascus. The Iraqi Shi’a, Kurds and ISIS each have respective autonomous regions. The Alawites and their Christian, Druze, and Ismaili allies have an autonomous region. Lebanon is divided into autonomous regions. Israel and Jordan face factional issues that their security services and militaries contain. Iran, Turkey, and the Arab Gulf states vie with each other in a proxy war for influence while Russia and the West struggle to maintain their influence in region. In effect, the region has re-Ottomanized—fractured into its political, ethnic and sectarian components—but without the overarching tutelage provided for 400 years by the Ottomans or the dictatorships that followed.

For 70 years, Western political and socio-centric myopia blinded them to the reality of the region—the artificiality of the political constructs. In the West, academia, government, and the media were accomplices in constructing a myth of the national state that has permeated policy since 1945. This blindness was abetted by Westernized elements within those societies that saw progress in terms of invented secular national states with Western institutions, which were in reality facades for the exercise of political control by various indigenous groups. Now the misconceptions of the past have come home to roost—the region has returned to its political, social and cultural reality. The question is, can U.S. policy and the structure of foreign policy institutions adjust to this new reality?

Perhaps. The centralization of policy decisions within the Oval Office and the influence of the National Security Council have subordinated the traditional foreign policy bureaucracy to the president and a handful of trusted advisors. Seeing Bush’s invasion of Iraq as a cautionary tale and burned by the failure of the ‘surge’ in Afghanistan, the Obama administration has reacted by overreacting and pulling back from any significant involvement on the ground. In Syraq, this has proven to be a mistake. The humanitarian crisis aside, the expansion of ISIS and the security threat that it poses to the West and the intervention of the Russians in the region to support the Assad regime, despite President Barack Obama stating categorically that he must go, has made the president look weak and foolish to many. It has also strengthened the hand of those that support a Bush-like intervention and given fresh ammunition to those opponents of the Iranian nuclear agreement who argue that Obama is naïve. The president is correct—the United States has no solution to the situation in the Levant, but as events have proven, he was badly mistaken to believe that Washington could escape significant involvement.

The question remains: will the administration continue to support policies that attempt to put the ‘genie’ of ethnic and sectarian conflict back in the bottle of dictatorial control from Damascus and Baghdad; or will it finally recognize that Sykes-Picot is dead and move toward a more formal autonomy for the Kurds and Sunnis? Supporting a policy that puts Sunnis and Kurds under the control of Iranian-backed Shi’a rump states will be acceptable to neither group nor to the West’s Arab allies in the Gulf. Autonomy based on a new ethnic and sectarian-based construct—the reality on the ground—may offer the only chance for the emergence of a future albeit imperfect equilibrium that at least stands a chance of undermining ISIS and the more radical groups. That said, whatever structure emerges will be on Sunni Salafi principles and tribal and clan relationships. Sykes-Picot and Western colonial construct is dead. As one Iraqi Sunni politician put it, “Partition is already a reality; it just has yet to be mapped.”

As for the administration, Obama will attempt to escape 2016 with the Iranian agreement intact—no matter what the violations on Tehran’s part—and a stubborn rearguard action to limit U.S. involvement by ‘supporting’ its allies. The goal is to keep a lid on the building conflict in the Gulf, retake Ramadi in Iraq and display a ‘mission being accomplished’ on the South Lawn, and then retreat to Chicago leaving behind chaos, emboldened adversaries, and distrust of U.S. policy (or lack thereof) by its allies across the region. While some of these problems are unavoidable, the situation will provide more ammunition for the Republican Party to tie the Democratic candidates to Obama and what they already view as his “feckless” policies in the region. Democrats have already begun a subtle, or perhaps not so subtle, process of distancing themselves from the administration any number of issues.

Domestic politics notwithstanding, the great fear in the White House is that it actually might have to act. This could be forced by another significant terrorist attack or by a broader conflict between the Gulf Arabs and Iran and its proxies. The administration does not want to be put in a situation where it is forced to either support its Gulf allies or back down again as it did in Syria 2013. Obama’s great desire is to limit further involvement and declare victory as he leaves office in early 2017. The Middle East may not cooperate.

A portal to the past: The restoration of Erbil’s architectural heritage

What does Russia’s war in Ukraine mean for Iraq?