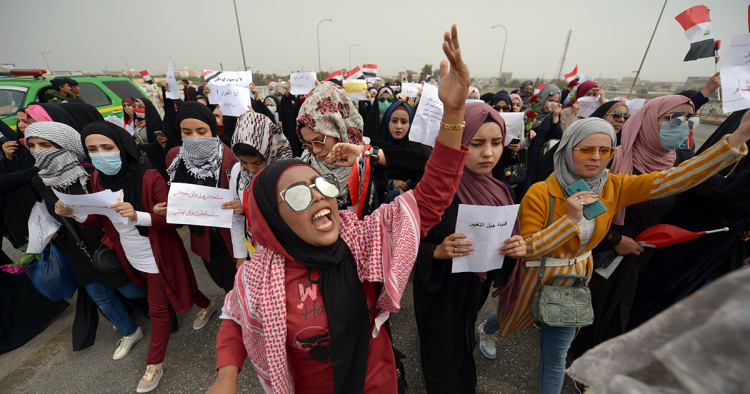 On March 8, the world came together to celebrate International Women’s Day (IWD), abarometer of annual development on global gender equality. This year, violence against women and women’s protection have been front and center on the political agenda across the world, including in the Middle East, as incidents of violence against them spark mass mobilization and anger from citizens. As civic activism grows, and citizens are increasingly politically and publicly engaged, women are fighting louder and harder than ever before to be a central voice in broader calls to action.

Successive lockdowns over the past year — as a result of the COVID-19 pandemic — have forced people behind closed doors and left millions out of work, with livelihoods hanging in the balance. For women, the effect has been more acute. Domestic violence is on the rise around the world. Further, women are more likely to lose their jobs than men, even more so women from minority ethnic backgrounds specifically. For the Middle East region, the most vulnerable populations are refugee and displaced communities, which are made up overwhelmingly of women and girls. Even as the #metoo movement has spread across the region, and women’s rights activism has begun to gather speed, the war against women still continues.

Sexual and gender-based violence: Not an “Arab thing”

Against the backdrop of COVID-19 and significant political change, there has been a reckoning on the women’s rights agenda during the pandemic — and this is not limited to the MENA region. As IWD 2021 approached, the most developed nations found themselves embroiled in their own reckoning against misogyny, sexual violence, and inequality. In the United Kingdom, the violent and tragic death of 33-year-old Sarah Everard — allegedly at the hands of a serving London police officer — ignited an explosion of testimonies and mobilization of women’s groups against daily harassment, violence, and sexualization of women. It has sparked a political and security face-off between civilians, the police, and the government. In Australia, a tragic suicide coupled with allegations of rape against the sitting attorney general and public testimony of alleged sexual assault by government staffer Brittany Higgins has implicated Prime Minister Scott Morrison directly. And in the United States, New York Governor Andrew Cuomo faces calls for his resignation amid an onslaught of claims of harassment and inappropriate behavior by at least half a dozen women, including current and former staff.

That harassment and sexual violence at this level occurs on a daily basis anywhere in the world is not surprising. Indeed, for women across the globe it is a daily, relentless, lived experience. For years, however, we have defined developed democracies as being more open, fair, and equal — and by extension more just and protected places for women. Western media touts the “values” of developed democracies and has long portrayed citizens from the Middle East, especially pious Muslims, as living a life wholly incompatible with the likes of the U.S., Europe, and others.

No doubt, even personally, I myself am guilty of this. For years, living and socializing among a largely white, largely Western diplomatic corps in downtown Cairo, the experiences of daily life for women in Egypt were always deemed worse than in our native cities of London, Melbourne, New York, or Amsterdam. Following the sexual assault and killing of British diplomat Rebecca Dykes in Beirut in December 2018 (at the hands of her Uber driver), I unofficially provided friends at the British Embassy guidance and suggestions on how to mitigate daily harassment and what the embassy might be able to do to keep its female staff safer.

Women’s rights in the MENA region: Some progress amid continued inequality

Notwithstanding the gender equality battle that continues to rage globally, the Middle East has long faced significant challenges to progressing on the women’s rights agenda. These challenges have been exacerbated by the pandemic and the broader crackdown on civic space in the region, both of which have disproportionately affected women. Of late, however, women have become more vocal about the abuses and attacks they face regularly. They are fighting to change societal perceptions in largely patriarchal and religiously conservative settings.

Iraq has faced daily state-sponsored and armed militia violence against innocent and unarmed civilians since October 2019 and the start of the “Tishreen Revolution." The names of the countless young activists who have been murdered are reported by the press on a daily basis. Women within the civil society and protest movement have documented numerous incidents of intimidation and threats of violence. Female activists are being specifically targeted by militias and they remain the most vulnerable members of the movement.

Since the elections in 2018, there have been strong calls for accountability for the ISIS genocide against the Yazidi people in August 2014 from Nobel Peace Prize winner Nadia Murad and numerous women’s rights advocates. President Barham Salih has pushed forward the “Yazidi Survivors Law,” and on March 1, 2021, the Iraqi parliament finally passed the long-awaited bill. It allocates the minority group of survivors 2% of the public sector job market, fixed salaries, and land. Although initially tabled as a law that identified the very distinct and unique violence committed against the Yazidi population, the final iteration provides reparations for a number of minority groups indiscriminately targeted by ISIS, including Turkmen, Shabak, and Christians. President Salih tweeted on March 1 that the law “is a victory for the victims of our daughters who have been subjected to the most heinous violations and crimes of ISIS genocide.”

Nevertheless, this remarkable moment for the victims of ISIS is a rather isolated case. Iraq’s Domestic Violence Bill remains stuck, wrapped up in ongoing political lobbying and stagnation of governance that has come to define the country’s current political order. The parliamentary response to continued attempts to pass the law is a more common example of how government institutions, led almost entirely by men across the region, react to attempts to formalize legislative protections for women. Despite the fact Iraq is one of the few countries in the region with a relatively strong female quota in parliament, at 25%, a corrupted electoral process, with largely token female participation, has diminished the potency of women’s political role. This has coincided with increasing intimidation of women in the political process, both as candidates and voters. In addition, the parliamentary quota has not translated into greater inclusion of women in government. For both the federal government and the Kurdistan Regional Government, the number of women in government has declined steadily in recent years, with some governments being formed with no female representation at all.

While Egypt was once a bastion for women’s rights progress in the Middle East, its cabinet brought forward draconian draft amendments to its Personal Status Law in late February that — if passed — could set the country back 100 years. The amendments have been perceived as a form of “revenge tactic” against women following months of testimonies and mobilization against the threat of sexual violence, the infamous “Fairmont gang rape” incident, the case of serial rapist Ahmed Bassem Zaki, and the prosecutorial attack on at least a dozen young women jailed for posting videos on social media (the “TikTok women”). The amendments themselves have been released as the “gender rights” revolution mobilizes, with at least three serious and documented cases of violence against women spark significant anger across the country.

New amendments would remove the rights of single, unmarried women to travel without permission from a guardian ( a male family member like a father or brother). Other amendments would remove the right of mothers to engage on a number of issues pertaining to their children, including providing parental signatures for legal documentation such as their child’s birth certificate, passport, or national identity documents. Mothers would also not be allowed to choose their child’s education without the father, and like single women, they would not be permitted to travel without a husband’s permission. Although Egypt was once hailed for providing women significant freedoms — it was the first Arab country to allow women to petition for divorce without a guardian (Khul’, 2000) and mothers were allowed to pass on their nationality to their children in 2004 — the draft law would prevent women from marrying or divorcing without approval from a male guardian.

The draft amendments have sparked outrage from women across the country. Over 50 civil society organizations came together to issue a harsh rebuke to the government’s proposals, and all over Egypt — through social media platforms such as witter, Clubhouse, and Facebook — women and male allies are mobilizing in an attempt to raise the political heat over the amendments. Following harrowing testimonies over the summer of 2020 related to sexual harassment and violence against women, parliament hurried through a law engineered to quell anger over the arrest of witnesses to sexual crimes, and protect their identities if they came forward. But Egypt’s lawmakers continue to respond superficially to calls for greater reform. A proposed sexual violence bill, which comes with the endorsement of the quasi-state organization the National Council for Women, languishes in the public space, ignored by lawmakers.

But every cloud has a silver lining. On March 12, Libya’s new prime minster, Abdul Hamid Mohammed Dbeibah, announced his new government, in which women occupy five of the top positions, including the country’s first ever female foreign minister, Najla el-Mangoush, and justice minister, Halima Abdulrahman. The new government, including Mangoush and Abdulrahman, was sworn in the following week. While Libya faces numerous challenges on its path to ending the conflict and beginning a process of democratic transition, the eclectic and diverse mix of appointees in the new government suggests a civilian transformation the country.

As the world adjusts to post-pandemic life, women are forcing a reckoning in society over the fear and intimidation they feel on a daily basis at the hands of men. It is not a language or sentiment reserved only for poorer, less developed or — as viewed from the West — more religiously conservative societies. It is a universal language felt by all women, everywhere.

Once again, Iraq is at a crossroads