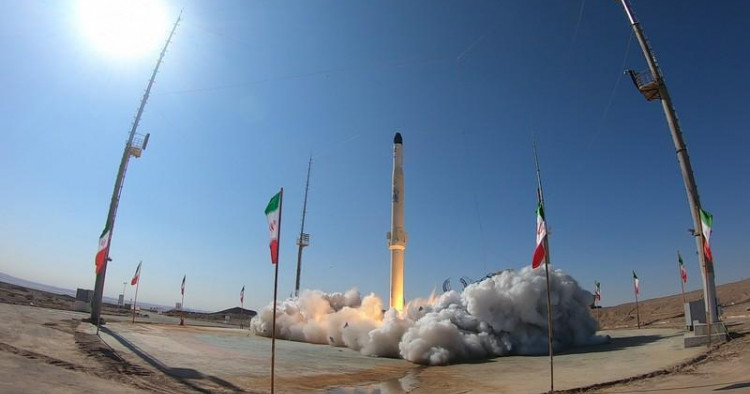 According to reporting from The Washington Post, Russia is set to provide Iran with a high-tech satellite called Kanopus-V. Russia will launch the satellite from its territory and then hand over control to an Iranian crew that received essential training in Russia. Iran will control the satellite from a newly built facility in Alborz Province, near Tehran.

For Iran, this could be the most critical military development since the international arms embargo expired in October 2020. However, it is not surprising given past covert technological and military dealings between Tehran and Moscow. In the fall of 2020, the CEO of a Russian research center disclosed that Iran had acquired the Rezonans-NE radar system from Russia and used it to successfully identify and track U.S. F-35 warplanes. Though limited in scope, Iran’s efforts to enhance its reconnaissance and surveillance capabilities by importing advanced foreign technologies are vital to compensating for its obsolete air defense software and hardware, especially its aging air force.

Russia is well aware of this Iranian vulnerability and is determined to deliver less controversial defensive military technological equipment that could help Tehran, to some extent, to cope with its regional rivals’ advanced weaponry. In its interactions with Iran, Russia is perceptive, careful, and mindful of the broader region. First, Moscow sees itself as a balancing force in the Middle East that wants to cooperate with all countries and seize economic and political opportunities wherever possible. Therefore, it is a priority for Russia not to jeopardize its ties with Arab states and Israel because of its relations or specific transactions with Iran. Second, Russia does its sensitive military deals primarily with the Islamic Revolutionary Guards Corps (IRGC) on behalf of Iran. The IRGC is under heavy U.S. secondary sanctions and was designated as a foreign terrorist organization (FTO) during the Trump administration. Any overt exchange could quickly put the Russian entities involved at risk from the U.S. government.

Additionally, before the U.N. arms embargo on Iran expired in October 2020, the U.S. government unilaterally sanctioned Iran’s Defense Ministry and “restored” the U.N. arms embargo on Iran through an executive order. That is why Russian President Vladimir Putin vehemently denied the recent story about the satellite deal with Iran, calling it “nonsense” and “garbage.” Although Russia is affected by some of the same sanctions as Iran, for example under the Countering America’s Adversaries Through Sanctions Act (CAATSA), it is strongly opposed to the imposition of more sanctions on major entities like Roscosmos. Roscosmos runs the Russian space program and its subsidiary VNIIEM is the manufacturer of the Kanopus-V satellite.

Nonetheless, supplying Iran with a secret new tool in space does not necessarily mean Moscow is giving Tehran strategic superiority over its regional rivals or adversaries such as Saudi Arabia and Israel. The key feature of the Kanopus-V is its ability to take high-resolution photos by a camera with a resolution of 1.2 meters. Generally speaking, this is not a special provision for Iran as anyone can purchase satellite photos from commercial companies. Unlike exaggerations about the “threats” of improving Iranian satellite capacity, some Israeli officials believe that the satellite “lacks any strategic significance” and Iran’s decision to purchase a satellite from Russia could even be an indication of its failure to develop its own domestic satellite launch capability. Furthermore, a senior Israeli security analyst also noted that Israel could disrupt the satellite’s functions by “jamming” it or even targeting it with a “missile.”

The satellite’s other possible military capabilities and Iran’s primary purpose for acquiring it are still unclear. One possibility is that Tehran expects to use the satellite to improve the aiming accuracy of its missile program if it can be switched from civilian to military use. Supreme Leader Ayatollah Ali Khamenei always asks the IRGC’s Aerospace Force to improve missile aiming accuracy. He recently declared that Iran’s missiles are “precision” and has asked the Aerospace Force to keep working on enhancing their accuracy. More advanced than its other defensive military sectors, Iran has developed its offensive missile program through self-sufficient means. Having a foreign satellite in orbit may appear very useful for this program, but it will not be adequate for the Aerospace Force, which also has its own expanded space program and tries to launch its military satellites with launchers it has produced itself.

Apart from the Aerospace Force’s successes in developing air defense systems, ballistic missiles, and drones, Iran’s defense sector has failed in the professional design and mass production of modern jet fighters and is dependent upon purchases from abroad. Tehran regards Russia as the “friend of the hard times that will definitely deal with it differently.” Russia is thus a convenient arms supplier for Iran. Kazem Jalali, Iran’s ambassador to Russia, has stated that Russia is the Islamic Republic’s “priority” for arms imports. After the Iran-China $400 billion, 25-year strategic deal, which would significantly increase China’s economic and political footprint in Iran, this could be a “fair slice” for an expectant Moscow in Iran’s new arms market. If the ongoing talks in Vienna to revive the 2015 nuclear deal prove to be favorable and the U.S. lifts the economic sanctions imposed by the Trump administration, including the arms embargo, there will be no obstacle, at least on paper, to Russia supplying Iran with arms. In an interview with the Islamic Republic News Agency (IRNA) on June 23, Russia’s ambassador to Iran, Levan Dzhagaryan, said, “Iran’s arms embargo expired last year … and since October 2020, there is no problem for arms trade with the Islamic Republic of Iran, and we are ready for that.” “Some countries are worried, but we say do not worry, the Islamic Republic would not attack, it is not a threat to anyone and wants to purchase arms just for its defensive interests,” he added.

Providing a satellite is thus a preliminary expression of intent in this regard. Following notable developments such as Foreign Minister Javad Zarif’s leaked comments about Russian efforts to “sabotage” nuclear talks in 2015, the exclusion of Tehran from the 2020 Nagorno-Karabakh cease-fire talks and agreement, and the growing competition with Iran for economic and political influence in Syria, Moscow intends to assure the Islamic Republic’s national security and foreign policy establishment that it still sees Iran as a security ally in the Middle East.

Fardin Eftekhari is a PhD candidate in the Department of Regional Studies at the University of Tehran. He also has an MA in International Relations from Shahid Beheshti University in Tehran. Fardin's work focuses on Iranian national security and foreign policymaking. The opinions expressed in this piece are his own.

Can the IRGC-Taliban honeymoon continue? (Part 2)