Russia’s “troubleshooting tactics” with the Taliban 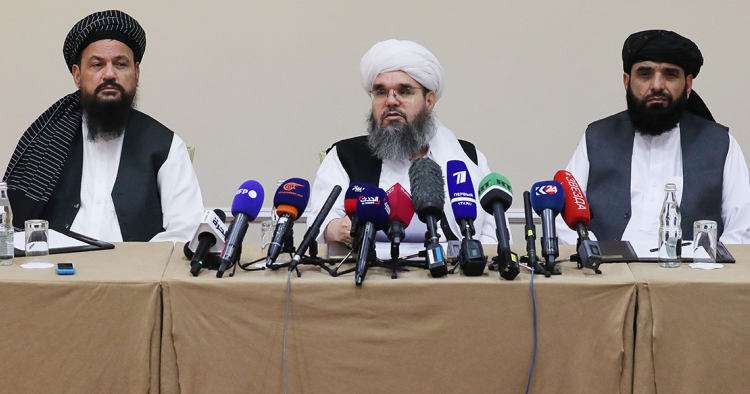 As U.S. forces continue to draw down from Afghanistan, the Taliban are rapidly filling the void by occupying large new swaths of territory and key military infrastructure. Last week the movement announced it controlled up to 85% of the country. With hundreds of Afghans, including members of the military, crossing the border to the neighboring former Soviet republics of Tajikistan and Uzbekistan, speculation over the potential destabilization of Central Asia is mounting. Many regional governments are looking to Moscow for support and defense.

Russia is indeed a key stakeholder in the process. With the exception of Turkmenistan, a self-isolated state that also shares a border with Afghanistan, Russia has a visa-free regime with all the Central Asian countries. Kazakhstan, Kyrgyzstan, and Tajikistan are members of the Collective Security Treaty Organization (CSTO), a Russia-led defense and security alliance of ex-Soviet republics. Russia has long been concerned with the presence of Islamist extremists near its borders or in adjacent regions — a reason it cooperated with the U.S. and its allies in Afghanistan in early 2000s and launched its military campaign in Syria in 2015. To top it all off, most of the post-Soviet space alongside Russia’s borders — what Moscow calls its “near abroad” — has been in flames in recent years: war in eastern Ukraine, instability in Belarus, war between Armenia and Azerbaijan over Nagorno-Karabakh, and turmoil in Kyrgyzstan. The prospect of the Taliban’s return to power is yet another grave concern for the Kremlin.

Speculation and conspiracies that the United States is intentionally fueling fires along Russia’s borders to keep Moscow busy in Eurasia and away from meddling in Western affairs have never been in short supply among the Russian political and expert community. That the Taliban are now taking one base after another from the Afghan military, to discover loads of American weapons left behind, only adds fuel to the fire of suspicion in Russia. While the chattering classes in Moscow get worked up about the failure of the United States to stabilize Afghanistan after 20 years, top Russian decision-makers seek ways to engage the Taliban as a necessary evil with which they must deal.

It is in this context that a delegation from the Taliban’s “political wing” travelled from Doha to Moscow on Friday, July 9 for talks with senior Russian officials. On Russian social media, the visit quickly turned into a political meme. The Taliban have been designated as “terrorist organization” in Russia since the early 2000s and journalists pressured the Foreign Ministry about the legal basis for officially hosting them in Moscow. “We have contacts with all kinds of representatives: acting and former officials, NGOs and opposition groups. What is important is that we don’t hold official talks with non-official representatives as if they were official ones,” the spokesperson for the Foreign Ministry, Maria Zakharova, explained.

Russian journalists who covered the trip drew attention to the fact that in their meetings in Moscow, the Taliban always used the term “Islamic emirate” as opposed to the “Islamic republic” that Afghanistan is today. This was seen as a clear sign of their vision for the country and a not-so-subtle attempt to position themselves already as the “winners” who can decide the fate of the “defeated” (the Afghan government).

The Taliban’s current tactics seem to be two-fold: While fighting over some parts of Afghanistan with Afghan government forces and negotiating control over others, they seek international legitimacy and the acquiescence or non-resistance of the major powers. The latter, in turn, seem to be coming to terms with the fact that the Taliban’s return to power is highly probable, whether one likes it or not, and the leadership of key countries — from Iran to China to Russia — are now negotiating with the Taliban to secure their own interests and draw red lines. Remarkably, on the same day one group from the Taliban was negotiating with the Russians, another was meeting with the Iranians.

Amb. Zamir Kabulov, President Vladimir Putin’s special envoy for Afghanistan, spent some time on Friday conveying to the Taliban Russia’s key concerns vis-à-vis the situation at this stage. The list included four major items: the potential spillover of instability from Afghanistan into Central Asia; the threat of ISIS to Russia and its allies in Central Asia; drug trafficking; and the safety of the country’s diplomatic and consular missions.

The Taliban sought to provide reassurances on all four items and said they would not “violate the borders of the Central Asian countries” and would “provide guarantees of the safety of foreign countries’ diplomatic and consular missions in Afghanistan.” They also committed to “eradicate drug production in Afghanistan” and stated they were “firmly determined to ward off the threat of ISIS in Afghanistan.”

If these were only packaged as “promises,” nobody in Moscow would take them seriously. After all, the Taliban has demonstrated that since the 2000s it has not just grown stronger militarily but matured politically as well. By doing all the back-channel diplomacy with the Chinese and Iranians and the shuttle diplomacy with the Russians and Americans, they are acting as a classic “continental power” trying to limit the number of fronts from which a military threat can appear. But Russia is also doing the same.

The bitter lesson of the Soviet invasion, alongside Russia’s overstretched military, economic issues, and other current political priorities make Afghanistan an unnecessary distraction for Moscow right now. But stability in Central Asia, the security of Russia’s own southern borders, as well as the spread of extremist ideologies are all issues that Putin will always have the time, resources, and appetite to address. This is especially true now that he believes the Russian military has a lot more means than the Soviets did to make the Taliban’s life miserable without a direct intrusion into the country. Therefore, it appears that in Moscow the conversation was more about setting red lines, rather than exchanging promises.

Russia may not like having an Islamic emirate a few miles from its borders, but as long as the Taliban’s agenda is local and not global, like that of ISIS, and their focus is on imposing sharia law in Afghanistan — as bad as it may be for the local population — Russia seems to believe it can live with it. Russia’s military intelligence, the GRU, would be kept busy monitoring the situation, the Defense Ministry will have to do a lot more military coordination with its Central Asia peers, the Federal Security Services (FSB) would be preoccupied with tracing possibly rising Islamist influences in Central Asia and Russia, and the Federal Drug Control Service would be put on high alert for potential new heroin production schemes and flows to Russia. But it still appears to be a better option for Moscow than getting militarily involved in the country with no clear political goals and huge potential costs. It remains to be seen whether this will hold true, however, as the situation in Afghanistan continues to change rapidly.

Can the IRGC-Taliban honeymoon continue? (Part 2)

Missing the bigger implications of US withdrawal from Afghanistan