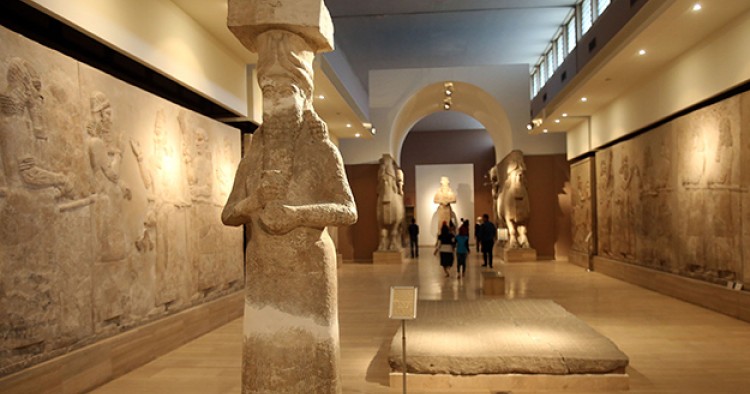 Ongoing conflict is robbing Iraq of both its future and its past by stripping the country of its tangible cultural heritage.[1] The Islamic State, as part of its strategy, is deliberately seeking to erase all aspects of Iraqi identity which compete with its own dogma. Iraq’s cultural heritage faces additional threats in the form of illicit looting, vandalism, government neglect, and political infighting. The Iraqi government lacks a nationwide strategy to preserve, protect, and rebuild the sites contributing to the country’s cultural legacy of being the cradle of civilization.

Iraq’s cultural history spans some 10,000 years and is home to more than 10,000 heritage sites including the former Assyrian capital Samarra, the Erbil citadel, and the fortified city of Hatra. Iraq’s National Museum was, prior to the U.S. invasion, home to the largest collection of Mesopotamian artifacts. The country’s oil revenues funded some of the best heritage preservation efforts and archaeological research in the entire Middle East. But the state’s capacity diminished after the lengthy Iran-Iraq war, the Gulf War, and punitive sanctions. The American invasion in 2003 resulted in wholesale destruction, including the ancient city of Babylon, and left the country’s cultural property vulnerable to excessive looting.

This has played right into the hands of the Islamic State, whose iconoclasm is a tactic of war. Since its emergence in 2014, the Islamic State has destroyed a myriad of important physical artifacts, including the tomb of the biblical prophet Jonah in Mosul and ancient sites in the former Assyrian capital at Nimrud. There are several motivations for this. The organization sees its actions as keeping with the Salafist-Jihadist interpretation, calling for the removal of polytheistic influences in society. More practically, the destruction of mosques and shrines—mainly Shiite and Sufi—libraries, and universities cleanse Islamic State-controlled territories in Iraq of any competing religious and cultural influences. These spectacular attacks capture the world’s attention, prop up its pretense of invincibility, and facilitate financing, through underground antiquity markets, for its activities. According to Bilal Wahab, a lecturer at the American University of Iraq- Sulaimani (A.U.I.S.), the Islamic State’s revenue from looting and trafficking artifacts is second only to oil smuggling.

The negligence of the central Iraqi government is only exacerbating the situation. On February 29, 2016, the U.S. Embassy in Baghdad warned that the Mosul Dam "faces a serious and unprecedented risk of catastrophic failure with little warning," a failure that would result in an in-land tidal wave jeopardizing the lives of hundreds of thousands of people. The breach would also destroy the town of Samarra, a UNESCO World Heritage Site and former capital of the Abbasid Caliphate. The U.S. Army Corps of Engineers called the Mosul Dam “the most dangerous dam in the world” in 2006. The Assyrian sites of Nimrud, Ninevah, and Khorsabad are only a few of the known sites that lie in the tidal wave’s path. The Islamic State’s presence in the area has caused security concerns, to be sure, and has contributed to delayed maintenance plans, but ultimately it is the central government’s responsibility to ensure the dam does not collapse.

Other aspects of Iraq’s cultural heritage are threatened because of strained internal politics in the Iraqi government. Prophet Nahum famously predicted the fall of the Assyrian empire in the mid-7th century BC. His tomb lies in the town of al-Qosh, on the border between the central government’s area of control and that of the Kurdistan Regional Government (K.R.G.). The tomb may potentially collapse due to neglect and, according to Sherzad Omar Mamsani, the Jewish representative of the K.R.G.’s Ministry of Religious Affairs, the Islamic State in nearby Mosul could move in to destroy the tomb, just as it destroyed Jonah’s and Ezekiel’s tombs in 2014. Responsibility and sovereignty in the area remain murky. A local Assyrian-Christian family has protected the dilapidated site on their own initiative since Kurdish Jews moved to Israel in the 1950s. The K.R.G.’s Ministry of Religious Affairs has appealed to UNESCO to intervene, which responded that it can only intervene after receiving an official request from Iraq’s central government. However, Baghdad has yet to follow up on the Kurdish appeal, leaving the tomb in a precarious state.

Unfortunately, the loss of cultural heritage is not new for Iraqis. After the first Gulf War, the Ba’athist regime drained the marshes of southern Iraq, forcing denizens of the marshlands, whose history stretches back to 3000 B.C., to abandon their traditional lifestyle. The regime sought to divert the flow of the Tigris and Euphrates rivers away from the marshes in order to remove President Saddam Hussein’s enemies, both the local Marsh Arabs and those who sought cover in the marshes. By 2000, 90 percent of the marshlands had disappeared. After the 2003 overthrow of Saddam, however, local initiatives helped destroy many of the dams put in place by the Ba’athists, allowing the Tigris and Euphrates to flood the area once again and enabling the return of the delta’s flora, fauna, and original habitants. Nature Iraq, a local NGO, helped spearhead several projects to recreate freshwater marshes, among other initiatives. On July 18, 2016, UNESCO classified the marshlands a world heritage site. Prime Minister Haider al-Abadi highlighted the success in light of the “destruction and demolition of Iraqi heritage and antiquities by barbaric terrorist gangs.” Although the marshes continue to face ecological issues from dams further upstream in Syria and Turkey, the local initiative to restore the marshes, backed by international consensus, is providing a bright light for Iraqis trying to preserve their culture from the direct and indirect causes of protracted conflict.

The Iraqi Institute for the Conservation of Antiquities and Heritage (IICAH) is another exemplary initiative. IICAH trains Iraqi museum and heritage professionals to build the next generation of Iraqi conservationists. IICAH’s educational facility, based out of Erbil, brings together Iraqis from diverse backgrounds who want to master modern preservation techniques to prevent future loss of the country’s cultural patrimony. IICAH receives joint funding from the central government and the K.R.G., demonstrating the collective interest in preserving Iraq’s cultural heritage, despite oft-tense relations. The flagship conservation training course has now had more than 200 graduates. IICAH has also convened its first-ever training related to disaster risk management for collection sites, following the Islamic State takeover of Mosul.

Preserving Iraq’s cultural heritage is both essential and urgent. Different platforms and initiatives have sought to raise awareness and call for Iraqis to join together in celebrating their cultural diversity (see video clips produced by the Iraqi State Board of Antiquities and Heritage in partnership with UNESCO). Conferences have been successful at bringing together a wide range of actors to explore ways to move forward. A.U.I.S. hosted its first annual Iraq Cultural Heritage Symposium last April, focusing on the destruction of important heritage sites by the Islamic State. After the success of this first symposium, a second has been planned for mid-September. The Middle East Institute has embarked on a region-wide effort to preserve the region’s antiquities amid threats from conflict and terrorists. MEI is hosting its second annual #CultureUnderThreat conference, bringing together ministers from 17 Arab countries to analyze the region’s approach to curbing the illegal smuggling of cultural artifacts from conflict zones.

Local initiatives have also been launched to raise awareness and stop the damage. For example, Let Us Save What Remains, organizes educational trips for youth groups to visit ancient rock reliefs in the Zawa Mountains and, in partnership with the Dohuk Governorate Directorate of Antiquities, to view active excavation sites. Plans are also underway to begin visiting schools and youth centers to develop an education system that teaches young Iraqis about the importance of cultural heritage sites. Rima Raban, one of the organizers, said she is confident that greater knowledge of the issue will help “maintain the country’s identity from being faded away by destruction, whether by the national conflict, deliberate damage, or negligence.”

On a national scale, the reopening of the Iraqi National Museum last year provided strong support to Iraq’s threatened cultural heritage, countering the Islamic State’s divide-and-conquer narrative. However, the rampant looting of the museum after the 2003 American invasion reminds Iraqis that threats to their cultural patrimony will likely outlive radical groups like the Islamic State. The Iraqi government needs to look ahead to develop a long-term national strategy to protect its cultural property.