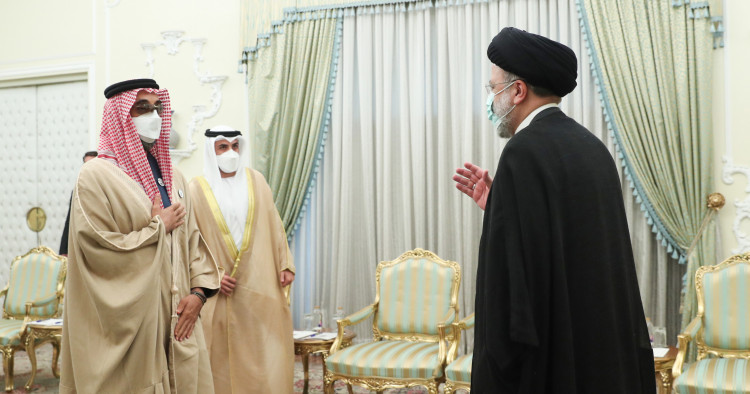 Anything that moves Iran and its Gulf Arab neighbors, particularly Saudi Arabia, away from confrontation is a good thing. Lowering the temperature on these fraught bilateral relations lessens the chances of miscalculation and escalation. Thus, having witnessed the dramatic Iranian attack on Saudi oil facilities in September 2019, regional observers have cheered more recent moves toward Iranian-Gulf détente. This past August, the United Arab Emirates sent its ambassador back to Tehran, amidst high-level talks between the two sides. The Saudis and the Iranians have been talking in Baghdad, through Iraqi good offices, since April 2021.

As welcome as these green shoots of regional communication are, they should not blind us to the extensive obstacles to a real and sustained relaxation of tensions. While some might attribute those obstacles to sectarian animosity, the core of the problem is less about Sunnis and Shi’a and more about what international relations scholars call the “security dilemma.” The term has come to be used loosely as a synonym for any geopolitical problem, but it actually has a more rigorous definition that can help us understand why a Gulf regional understanding is so hard to achieve.

John Herz coined the term “security dilemma” in his 1950 book Idealist Internationalism and the Security Dilemma. And since then, the concept has been key to foundational works in international relations theory by Robert Jervis, Glenn Snyder, Charles Glaser, and many others. Its core insight is simple to grasp but devilishly difficult to overcome. States want to protect themselves, so they build up their power — military, political, economic, ideological — to fend off potential adversaries. This buildup might be purely defensive from the state’s perspective. However, its neighbors cannot be sure about those defensive intentions. The neighbors then have to increase their power to guard against the possibly aggressive intentions of the first state, which, seeing its neighbors take such steps, redoubles its own efforts. From such dynamics, hostility spirals outward and wars can result.

The situation of Iran and the Gulf states is a pure example of the security dilemma. The Iranian leadership sees the United States and Israel as mortal threats that purportedly aim to bring down the Islamic Republican regime. So it justifies its flirtation with nuclear weapons as a purely defensive step to deter American-Israeli aggression. It characterizes its support for non-state actors throughout the Arab world, like Hezbollah, the Houthis, and various Iraqi Shi’a militias, as “forward defense” against possible American and Israeli machinations. It portrays American security relations with Saudi Arabia and the other Gulf monarchies as inherently threatening to Iran. How sincere these protestations of defensive intentions are is not particularly relevant here. All states operate from a mix of offensive and defensive motivations in their foreign policies. Iranian leaders’ belief in the threat from the United States and Israel to the regime in Tehran is undoubtedly real, with plenty of evidence to back it up.

Leaders in Saudi Arabia and the UAE, surveying the expansion of Iran’s influence throughout the Arab East and the development of Iran’s extensive nuclear program, see themselves threatened. Iran’s attack on the Saudi oil facilities in September 2019 confirmed that threat. As worried as they are about America’s staying power in the region, the growth of Iranian power and Iran’s willingness to use it against them pushed Riyadh and its Gulf monarchical allies to deepen their security relations with the U.S. and, in some cases, with Israel through the Abraham Accords. Those steps simply confirm to the Iranian leadership the threats that they face. And so the hostility spiral escalates into a textbook example of the security dilemma.

The security dilemma cannot be “solved.” It is structural, built into the nature of the balance of power system that drives most international security situations. However, its effects can be mitigated. Communication can reduce (but not eliminate) fears of hostile intentions. Strong defensive postures can signal both the costs of conflict for aggressors and the limited goals of those building their defenses. Common interests can bring states together in cooperative frameworks that greatly reduce the chances of armed conflict.

Unfortunately, few of those mitigating circumstances can be found in the Gulf these days. The American withdrawal from the Joint Comprehensive Plan of Action (JCPOA) in 2018 opened the door to further Iranian nuclear development. The recent failure of the Biden administration and Iran to negotiate a return to the JCPOA increases the likelihood of a confrontation down the line and will exacerbate regional tensions. The continuing crisis in Iraqi politics adds to regional uncertainty. The Yemen conflict drags on, despite the recently renewed ceasefire. It is a good thing that the Saudis and the Iranians are talking, but so far that talk has not led to any tangible agreements on regional questions.

Relevant historical examples in the modern Middle East of overcoming the obstacles to improved relations presented by the security dilemma are few and far between. The most significant case in this regard is the Egyptian-Israeli peace treaty of 1979. That required a substantial shift in Egyptian foreign policy goals and a change in Egyptian leadership to be possible. It is unlikely that Iran will undergo that kind of transformation anytime soon.

A more relevant example might be the détente achieved by the Shah’s Iran and Ba’thist Iraq in 1975, with the signing of the Algiers Accord. In that case, an overtly hostile relationship was ratcheted down with the end of Tehran’s support for Kurdish separatists in Iraq in exchange for border modifications that Iran had been seeking in the Shatt al-Arab. Yet the reduction in tensions did not last long, with the Iranian revolution sweeping the Shah from power and Saddam Hussein literally tearing up the Algiers Accord before the Iraqi parliament when he invaded Iran in 1980.

It is possible that the Iranian government could give tangible signals to the Gulf Arab states that it does not intend to threaten their internal or external security. Movement on the Yemen conflict could be such a signal, if Iran is interested in putting pressure on its Houthi allies for a settlement. Iranian cooperation with interested regional and domestic parties in Iraq to overcome the current governing crisis there would be another such signal.

As of now, there seems to be little prospect for Iranian moves to reassure the Gulf states or for American-Israeli moves to reassure Tehran. The security dilemma is alive and well in the Gulf region. That means that the possibility for an escalation of tensions and perhaps even direct conflict among the players in the region, including the United States, is ever present.

F. Gregory Gause, III is a professor of international affairs and John H. Lindsey ’44 Chair at the Bush School of Government and Public Service, Texas A&M University, and an affiliate of the School’s Albritton Center for Grand Strategy.