Tajikistan’s evolving relations with the Taliban 2.0 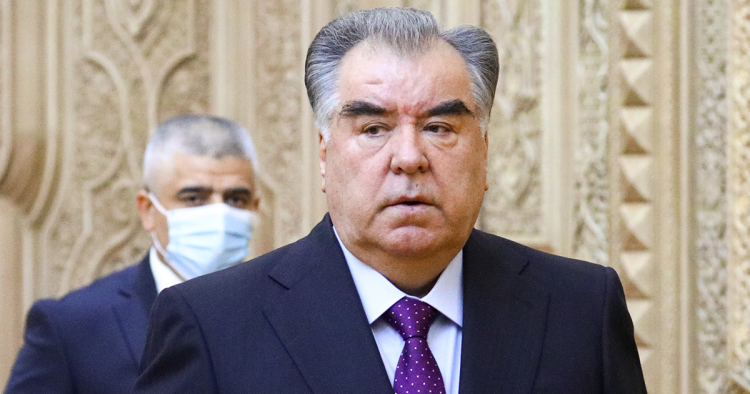 While the international community has adopted a “wait-and-see” attitude toward the Afghan Taliban, Tajikistan has taken a sharply critical view. Rhetoric between Tajikistan and the Taliban is increasingly bitter, a symptom of a broader problem in their bilateral ties. Tajikistan’s President Emomali Rahmon has condemned the Taliban regime in Kabul for failing to form an inclusive government and for violating human rights in the Panjshir Valley. The Taliban have responded by warning Tajikistan not to interfere in Afghanistan’s internal affairs.

Tajikistan is a small, landlocked Central Asian country and more than 90% of its population is Muslim. By giving shelter to numerous prominent Afghan resistance figures, Tajikistan’s foreign policy has taken an oppositional stance. Notwithstanding Dushanbe’s denial, remnants of the Afghan opposition are being supported by Tajikistan. Notably, Ahmad Masood, the leader of the National Resistance Front (NRF) and the son of the late commander of the Northern Alliance, Ahmad Shah Masood, is currently in Dushanbe. In September 2021, Tajikistan posthumously awarded the country’s highest civilian honor to two Afghan Tajik figures: Ahmad Shah Masood and former Afghan President Burhanuddin Rabbani. These gestures of moral support for the Afghan resistance underscore Tajikistan’s determination to resist establishing official relations with the Taliban government.

For their part, the Taliban have reportedly provided weapons to Tajik insurgents operating in Badakhshan along the Tajik-Afghan border. Reports of the Taliban creating an exclusive battalion of suicide bombers to be deployed at the country’s border with Tajikistan have also surfaced. Russia is concerned about the sharp turn in Tajikistan-Taliban relations. Pakistan, too, seems worried, and Prime Minister Imran Khan has spoken to Rahmon about the need to de-escalate tensions with Afghanistan.

Dushanbe’s opposition to the Taliban is not unusual, and there’s a reason for this. The Pashtun-dominated Taliban 2.0 faces opposition from the Tajiks, Uzbeks, Hazaras, and other Afghan minorities, who constitute more than half of the country’s population. Tajikistan has often been at odds with the Taliban over their mistreatment of ethnic Tajiks in Afghanistan. Along with Russia and India, Tajikistan also supported the Northern Alliance in its fight against the Taliban during the group’s earlier iteration. When the Taliban were ousted from power in 2001, ties between Kabul and Dushanbe improved considerably, but the fall of the Ashraf Ghani regime and subsequent developments have signaled the start of a return to animosity.

Dushanbe’s primary security concerns stem from sharing a border of more than 1,400 km with Afghanistan. Without strict policing of this porous border, Tajikistan is unable to prevent the flow of illicit drugs and refugees into the country. Large quantities of illegal opium and heroin pass from Afghanistan to Europe through Tajikistan, which has a high rate of drug abuse.

The U.S. and Russia are assisting the Tajik government in strengthening its border security forces to address threats. On Nov. 19, the U.S. Embassy in Dushanbe provided 18 Jeeps, valued at $1.3 million, to Tajikistan’s Border Guard Forces to help secure its borders, and this is in addition to over 20 vehicles given to the Tajik Ministry of Defense a month earlier. Since 1992, the U.S. has provided over $330 million in security sector assistance to Tajikistan. The U.S. is also assisting Dushanbe logistically to deal with the aftermath of the influx of Afghans who fled the country following the Taliban takeover in August. In early November, about 140 Afghan Air Force pilots and crew members who had fled Afghanistan and were later detained by Tajik authorities were flown out of the country with American help.

The Chinese are helping Dushanbe deal with its security challenges too. Tajikistan recently granted Beijing permission to construct a new military base in the eastern Gorno-Badakhshan Autonomous Province near the Pamir Mountains. While under formal Tajik control, the base will address Chinese concerns about terrorism and instability from Afghanistan impacting its western Xinjiang region, which shares a border with Afghanistan and Tajikistan.

There is another reason for Tajikistan’s hostility to the Taliban as well. It is believed that Rahmon’s support for Afghan Tajiks to ensure their greater participation in the Taliban-led government may have been part of an effort to overcome his own domestic unpopularity and a smokescreen masking his inability to address mounting governance deficits. As argued by Temur Umarov, “His regime is reeling from economic difficulties and general fatigue with his almost thirty-year rule, so playing the ethnic nationalist and pan-Tajik defender card ensures his support among the Tajik people.” The effort could also be a strategic move to attract international aid for Tajikistan, whose economy has been hit badly by the pandemic. The country currently faces serious electricity blackouts, pushing up the prices for natural gas, coal, and firewood. By aligning anti-Taliban rhetoric with the evolving international response to Afghanistan, Rahmon could hope to garner greater economic support.

However, it would be misleading to see Rahmon as driven entirely by political opportunism. The immediate threat to Tajik interests as a result of the Taliban’s takeover of Afghanistan is the risk of Islamist radicalization within Tajikistan. If the so-called Afghan jihad played a key role in the break-up of the Soviet Union in 1991, the revival of the Taliban insurgency was instrumental in the defeat and departure of America from Afghanistan in 2021. Dushanbe fears that if the Taliban succeed in perpetuating a full-fledged Islamic Emirate, it could trigger a broader wave of Islamic radicalism. Since achieving independence from the USSR, Tajikistan has been trying to demonstrate that radical Islam is a threat to regional security. The government follows a stringent form of secularism and imposes tight controls on religious expression in the public domain. But a growing religious trend has raised concerns about the Tajik government losing support among religiously-minded people.

Rahmon has been in power for 30 years and has been particularly intolerant of Islamic movements in his country. His authoritarian regime seems aware that people have a wide range of motivations for joining Islamist groups, even though their understanding of what Islamism means is often contradictory and unclear. Although the Taliban’s regressive politics do not offer any real political solutions for majority-Muslim societies elsewhere in the region, the aspirational dimension of a desire for alternative politics is quite worrisome for secular governments. That is why the Tajik leadership views the Taliban as a source of religious fundamentalism that is dangerous and corrupting for youth and damaging to socio-cultural institutions.

As radical Islamist groups within Tajikistan receive ideological inspiration from the triumphant Taliban to establish an emirate of their own, the Rahmon regime is bent on consigning them to oblivion. Tajikistan is economically the most vulnerable country in Central Asia and threats from terrorist networks only compound the country’s sense of vulnerability, as the Tajik military is also believed to be the weakest in the region. In response to these threats, Rahmon has used pre-existing anti-Taliban sentiments to fuel nationalist fervor and cement his position against Islamists in domestic politics.

Regional geopolitics, however, may force Dushanbe to change its tone if surrounding countries start exerting pressure. Uzbekistan and Turkmenistan are already taking different positions vis-à-vis the Taliban. Under President Shavkat Mirziyoyev’s leadership, Uzbekistan is ready to cooperate with the Collective Security Treaty Organization (CSTO), a Russian-led regional security bloc. Unlike his predecessor Islam Karimov, Mirziyoyev is willing to follow Russia in responding to Afghan developments. Turkmenistan has maintained neutrality in Afghanistan and is now poised to increase its contacts with the Taliban regime.

The Taliban government in Kabul has not been formally recognized by any country. The combination of regional turmoil and the associated unpredictability in the political fortunes of the Taliban regime makes it particularly difficult to predict if or when the international community may confer legitimacy on the new rulers in Kabul. Given Dushanbe’s restlessness about the evolving situation in Afghanistan, the coming months may see a shift in Tajikistan’s hardline stance.

Following the hasty exit of American troops and the resulting security threats emanating from Taliban-ruled Afghanistan, all of the Central Asian states are looking to Moscow to take care of their security interests. Moscow, a security lifeline for the Rahmon regime, exerts outsized influence on the Tajik government due to the continued presence of Russia’s 201st Division in Tajikistan — Russia is currently expanding the military hardware at this base by stationing 30 modern tanks by the end of December — as well as billions of dollars in remittances sent by Tajik workers working in Russia. Russia has so far avoided recognizing the Taliban government, but its diplomatic involvement with them has grown over time. Thus, Russia’s recognition of the Taliban regime would definitely test Tajikistan’s resolve in siding with Afghanistan’s ethnic Tajiks.

While it is unlikely that current political tensions between Tajikistan and the Afghan Taliban will develop into a full-scale war, the potential for armed conflict remains high if the latter do not tone down their hostility toward inclusive governance. Afghan Tajiks have little prospect of near-term dominance or rehabilitation in the governing structures of Afghanistan, but Tajikistan will doubtless continue to exert significant political pressure on the Taliban regime to accommodate them.