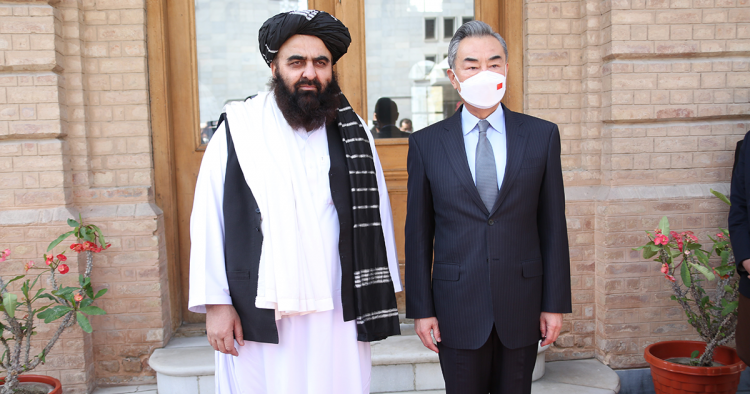 Despite expectations that China, Russia, and other states would try to exploit the Western military departure from Afghanistan, the Taliban’s regime remains unrecognized by any other government. Neighboring countries have not gone beyond limited diplomatic engagement, economic detachment, and security containment. Though the Taliban have focused on consolidating their internal authority rather than sponsoring foreign terrorist groups, U.N. experts have warned that Afghanistan has become a more favorable environment for such movements as al-Qaeda, the Islamic Movement of Uzbekistan, and especially the Islamic State-Khorasan Province (ISKP). Furthermore, the Taliban’s recently renewed culture war against women and other Afghans will likely make international engagement with the group even more difficult.

On March 25, Foreign Minister Wang Yi made an unexpected visit to Afghanistan on his South Asian tour, which included stops in India and Pakistan. He was arguably the most important foreign visitor to Kabul since the Taliban seized power last August. As in previous Sino-Taliban meetings, the Chinese delegation made clear that they want the Taliban to protect Chinese interests, nationals, and investments in neighboring countries as well as Afghanistan. Chinese representatives have dangled before the Taliban the potential for recognition of their government along with aid for national reconstruction in return for the Taliban’s abstaining from supporting regional terrorism and allowing Chinese businesses to profit from Afghanistan’s natural resources. China has kept its embassy in Kabul operating to sustain close communication with the group’s leaders. Beijing also invited the Taliban to send a representative to the Third Foreign Ministers' Meeting Among the Neighboring Countries of Afghanistan, held in the city of Tunxi on March 31, the first time a Taliban official has attended this gathering of China, Iran, Pakistan, Russia, Tajikistan, Turkmenistan, and Uzbekistan.

Despite Wang’s recent visit, China has approached Afghanistan gingerly. Chinese business entities continue to hold off on expanding existing investments or making new ones. China’s major economic projects, such as those involving the Mes Aynak copper mine and the Amu Darya oil and gas reserves, remain mothballed for various economic, ecological, and regulatory reasons. Although China shares a narrow border with Afghanistan along the Wakhan Corridor connecting northeast Afghanistan to western Xinjiang, the authorities in Beijing have made this conduit largely impenetrable to transit by people or goods. China’s Belt and Road Initiative projects also circumvent Afghan territory. In the security realm, Chinese policymakers are most immediately concerned with how the Taliban victory might increase instability in other countries neighboring both China and Afghanistan, such as Pakistan or the Central Asian republics. There are many more Chinese nationals and investments in these states than in Afghanistan itself. The recent attacks on Chinese workers in Pakistan have heightened Chinese sensitivities around terrorist attacks against Chinese nationals there.

Pakistan’s relations with the Taliban have deteriorated now that the group has returned to power in Kabul. Taliban leaders have taken the same firm line as previous Afghan governments against Pakistani efforts to build fences along the so-called Durand Line, which Islamabad sees as the formal Afghan-Pakistan border. Videos show Taliban fighters smashing the demarcation fences erected by Pakistan. Afghans insist that the 2,600-km frontier should be open for cross-border movement by the Pashtun tribes located on both sides of the frontier. Besides legitimizing their territorial claims, Pakistani authorities want to erect barriers against infiltration by the Tehreek-e-Taliban Pakistan (aka the “Pakistani Taliban” or TTP) militants who use sanctuaries in Afghanistan to support terrorist operations in Pakistan. Taliban actions may reflect irritation at Islamabad’s failure to recognize the Taliban government, despite doing so in the 1990s, as well as initiatives by local border commanders. Yet, the Pakistan government is reluctant to make a clean break with the Taliban. The connections with the group give Islamabad leverage with China, which expects Pakistan to advance Chinese interests in Afghanistan. A breakdown in ties could also give India an opening to rebuild its presence in the country.

In contrast, the Taliban’s ties with Iran have improved more than anticipated. There has been no reprise of the 1998 border clash between the two countries, when they almost went to war. In recent years, Iranian representatives have reached out to various Taliban factions, hedging against the group’s return to power. The new leader of the Islamic Revolutionary Guard Corps- Quds Force, Gen. Esmail Qaani, has played a leading operational role in Iranian security operations regarding Afghanistan. These have ranged from countering narcotics trafficking along the 900-km Afghan-Iranian frontier to recruiting Afghans for a proxy paramilitary unit, the Liwa Fatemiyoun. Having gained extensive experience fighting on behalf of the Assad regime in Syria, this unit could be deployed to support Quds Force operations in Afghanistan. Whatever lingering animosity might exist between the Iranian and Afghan regimes, both oppose the ISKP, which has attacked Afghanistan’s Shi’a Hazara minority. Additionally, a stable Afghanistan, even if run by the Taliban, could reduce the millions of refugees in Iran. Stability could also offer opportunities for transborder trade that circumvents U.S. sanctions. When Taliban Foreign Minister Amir Khan Muttaqi visited Tehran on Jan. 8, the parties discussed “political, economic, transit, and refugee issues,” along with water rights. Iranian Foreign Ministry spokesperson Saeed Khatibzadeh called the talks, which included Foreign Minister Hossein Amir-Abdollahian, a “positive” step, though the Iranian government insists that the Taliban-led government become more “inclusive” to earn its official recognition.

Central Asian governments are struggling to manage the novel security environment. Some have relaxed their border and customs controls with Afghanistan for some economic activities, but they more strictly regulate the movement of refugees and asylum seekers. Relations between the Taliban and the Tajikistani government remain particularly poor. President Emomali Rahmon has accused the Pashtun-led Taliban of discriminating against Afghanistan’s ethnic Tajiks. Taliban leaders have denounced Rahmon and threatened retaliation against his government and neighboring Uzbekistan for failing to return the Afghan military planes and helicopters flown out of Afghanistan by air force pilots fleeing the country. Meanwhile, there has been crossfire between Taliban and Turkmenistan border guards. Even so, these three Central Asian countries bordering Afghanistan, along with Kazakhstan, continue to send food, electricity, and other goods to Afghanistan, and have not openly supported an anti-Taliban insurgency as they did when backing the Northern Alliance in the 1990s.

Russian policymakers have been hedging against a possible Taliban victory for years by developing a working relationship with a group that Moscow officially deems a terrorist organization. In addition to cultivating contacts with the group, in recent years Russian representatives shared intelligence and provided the Taliban with arms and money. Even so, Russian officials seemed as astonished as others by the swift and sweeping Taliban triumph in August 2021. Russia would have preferred a military stalemate and a negotiated settlement that would have enhanced Moscow’s leverage by empowering some Afghan notables with whom Russia has cultivated close ties, such as former Afghan President Hamid Karzai. Still, President Vladimir Putin and his ministers enjoyed characterizing the outcome as a humiliation for NATO and the United States. Russian commentators warned Ukrainians that the West would abandon them just as easily, so they should reach a deal with Moscow while they could. They pressed Central Asian governments not to allow the Pentagon to relocate to bases on their territory, even to conduct “over-the-horizon” strikes against the terrorists in Afghanistan, whom Russian leaders cited as a major threat to Central Asia and the Russian Federation itself. Moreover, Russian officials cautioned these governments to deny Western requests to repatriate refugees through their territories on the pretext that the terrorists might exploit such an effort.

Russia kept its embassy in Kabul open and expanded engagements with Taliban representatives to encourage them to pursue moderate policies at home and abroad. Though Taliban leaders have fulfilled their pledge not to support international terrorism, their triumph could easily inspire Muslim militants to seize power in other Eurasian nations. Russian analysts have also questioned whether the group has the capacity to prevent other Eurasian terrorist groups from operating from within its borders. The instability seen during the past year in Belarus, Kyrgyzstan, and Kazakhstan, along with the abrupt outbreak of fighting between Armenia and Azerbaijan and between Kyrgyzstan and Tajikistan, probably made Moscow uneasy about the looseness of its regional allies’ grip on power in the face of the Taliban triumph. When sending several thousand Russian soldiers to Kazakhstan in January, Russian officials accepted the Kazak government’s line that the violent January 2022 riots in that country were caused by foreign extremists. Yet Russians hope to profit economically from any Afghan economic recovery. Though Russians have fewer investment resources than China, they often are more daring in their pursuit of foreign riches in fragile nations, such as in Africa, than Western or even Chinese entrepreneurs. Russia would also like to participate in any new economic conduits linking Afghanistan to Central and South Asia. Moscow has strived to advance its regional objectives by hosting senior officials from China, India, Iran, and Pakistan to discuss Afghan-related topics.

Since the Taliban has consolidated its power domestically, its neighbors have focused on making it behave as a responsible actor externally. As negative encouragement, they have not recognized the Taliban government or removed the group from terrorist lists, making clear that international legitimacy required better behavior. Neighboring states urge the Taliban to take measures to become a more acceptable partner to all foreign countries, since they want other states to bear the main burden of Afghanistan’s economic reconstruction. In this regard, Chinese and Russian representatives have blamed the United States and its allies for Afghanistan’s troubles. Both Beijing and Moscow have called for releasing frozen funds and providing additional foreign assistance to Afghans.

The Taliban have ignored ISKP condemnation of their ties with China, Iran, and Russia, which the ISKP have castigated as “the biggest enemies of Islam.” But the Taliban, without warning, have recently dismayed their neighbors by engaging in a fresh round of repressive acts that recalled their policies of the 1990s. For example, the Taliban’s Ministry of Vice and Virtue has deployed inspectors to public buildings to check whether entrants have proper beards, attire, and other signs of outward conformity to the Taliban’s distinct interpretation of Islamic dress requirements. The authorities have also imposed new limits on women travelers and established separate days for Kabul’s men and women to visit the city’s parks. Their last-minute reversal of a decision to allow girls to attend secondary school and a new edict banning foreign media content from local broadcasters provoked formal protests from the United States and other Western governments, pushing back the possibility of the Taliban government one day receiving broad international recognition.

Richard Weitz is senior fellow and director of the Center for Political-Military Analysis at Hudson Institute. The views expressed in this piece are his own.