Testimony | "Briefing on Human Rights and Freedom of Expression in Morocco" 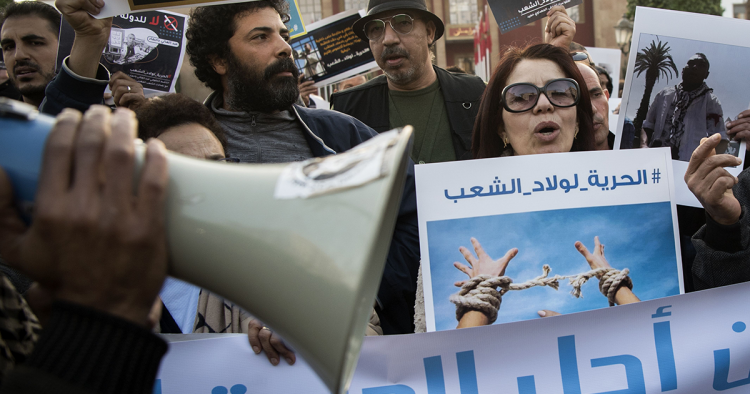 The following testimony was presented to the House Foreign Affairs Committee, Tom Lantos Human Rights Commission Briefing on Human Rights and Freedom of Expression in Morocco on August 12, 2021.

My goal today is to provide an analytical framework that explains and contextualizes the approach of the Moroccan leadership to freedom of expression and human rights generally. Morocco’s record on human rights and political freedoms is uneven. And the leadership’s approach is more pragmatic than principled. Where the leadership believes free expression and increased political freedoms are unlikely to challenge some of the fundamental power structures in the country, it will take a relatively lighter approach. Therefore, we see multiple political parties, largely free and fair elections, and frequent protests and strikes. But where the potential for politicians, journalists, or activists to challenge the Palace, the inner security apparatus, or reveal uncomfortable insights about power and money deep within the state, we have seen a readiness and an ability to target and silence specific individuals.

But first it is worth figuring out where the government has made progress on human rights and free expression and where they have regressed — and the logic of why these have happened together. Morocco’s human rights situation tracks with the broader political and economic development story of the past few decades. In the 1980s and 1990s, the country was a much more repressive state with a poor human rights record. The progress since King Mohammed VI ascended to the throne in 1999 is significant and Morocco is a different place in terms of political environment and civil liberties.  Most dramatically, in 2011 Moroccans found a stronger political voice, they protested and called for change, and a new constitution was adopted with a greater political role for elected institutions. The Islamist Justice and Development Party, which had faced constraints in its ability to run in previous elections, was able to capitalize on this gain to lead the government.

There are valid arguments about the limited nature of this reform, and the extent to which it has been undone over the past five years, and I will get to that, but to understand the complexities of human rights in Morocco it is important to understand how consequential 2011 was. Even before 2011 but particularly since, protests have remained a constant feature in Moroccan political culture largely without an overwhelming climate of fear — the current pandemic environment notwithstanding. While anti-protester police violence does occur, for the most part, students, workers, and others are free to organize large popular protests with little fear of retribution.

In terms of where human rights and freedoms of speech are lacking, examples here also track not only with domestic developments but also with broader regional geopolitical trends. Following 2011, in subsequent years, the Palace moved gradually to reassert itself, coinciding with a shifting regional outlook as the elected government in Egypt was toppled by the military in 2013 with minimal Western criticism and Syria and Libya descended into civil war much to the concern of the international community.

In Morocco the newly elected government came under increasing pressure from the Palace and pro-Palace political parties, and by 2016 the political status quo had been largely reestablished and arguably political parties and elected officials lost further ground. Alongside this political assertiveness, we see growing confidence in silencing specific voices.

And beyond the systemic issues highlighted here, the pandemic presented its own set of challenges with regards to state crackdown. The main concern here is that draconian measures and practices become normalized and eventually engrained in the state’s approach.

So what do these two different dynamics reveal about the leadership’s approach. First, the leadership is comfortable allowing protests and a degree of dissent which provides a pressure valve for the population; citizens freely organizing and protesting gives the country a positive image internationally and domestically. This mobilization and public debate also gives a sense of where the public stands on certain issues.

At the same time, we also see specific individuals — not large groups — targeted, because they are easier to silence and silencing them becomes a priority. These are journalists, activists, or people with a large social media following. And the topics they wade into tend to involve any criticism of the person of the king, the role of security services not just in domestic but also foreign policy, the Western Sahara of course, and particularly the intersection of elite political and economic interests. These people are silenced and punished through a variety of means: their personal lives are scrutinized and they might face professional sanctions or criminal charges involving rape and money laundering. The room for debate does not extend to any discussion of the core point at the heart of Moroccan politics: the role of the Palace and certain institutions under its oversight that are shielded from investigation and accountability, and the impact of this lack of accountability and transparency.

So then the question for the purposes of our audience today becomes how do you address and engage with the Moroccan leadership on these issues. If we consider Morocco’s recent foreign policy posture, it reflects the notion of an increasingly empowered, assertive, and confident monarchy, unwilling to accept criticism or yield to pressure. At the same time, Morocco takes pride in its relationship with its Western allies. Yet it has also shown with Europe and the U.S. in recent years that it will accept short-term tensions in relations to push back on pressure on issues it considers part of its core national interests.

That said, we can divide this into two parts. Pressure on Morocco to release from prison journalists or dissidents can work because the stakes are relatively low. And in responding to this pressure, Morocco can gain the positive coverage of the release or pardon, perhaps even a concession from the country applying the pressure, and the individual or individuals released have learned a lesson. But pressure intended to affect deeper systemic change is not as effective, especially as it would bump up against a leadership that increasingly sees itself as being less vulnerable to outside pressure than it has been in the past, as it is rather secure in its position domestically and internationally.

Intissar Fakir is a Senior Fellow and Director of the North Africa and Sahel Program with the Middle East Institute. The opinions expressed are her own.