The United States and the Gulf: Trapped in transition? 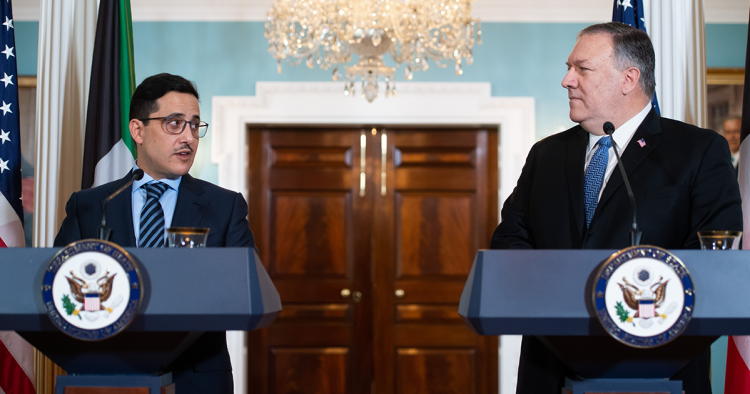 The mixed messages and pendulum swings in U.S. Gulf policy in recent years are rooted in and have further fueled deep questioning and a largely unresolved debate within the United States about America’s role in the region, and indeed in the world.

Like the U.S., which is trapped in transition from global primacy, relations between the Gulf Cooperation Council (GCC) and Iran are locked in confrontation. Breaking this impasse requires decisive U.S. reengagement in Gulf affairs led by vigorous, sustained diplomacy that promotes intra-GCC reconciliation and supports efforts aimed at tempering the Saudi-Iran strategic rivalry.

The security situation in the Gulf is tenuous, at best. The rift between Iran and the Gulf Arab monarchies is both a symptom and a cause of a chronic state of conflict that dates back to the 1979 Iranian Revolution. This is a condition successive American administrations have sought to improve but whose policies, especially the U.S.-led invasion of Iraq in 2003 and the botched post-Saddam reconstruction enterprise, have worsened.

Since then, GCC countries have adopted various approaches to push back against Iran’s perceived regional ascendancy and hostility. However, these have all fallen short. Assertive go-it-alone policies have not worked, multilateral initiatives have gotten no traction, and efforts to develop a collective deterrent force have failed. A glaring example of the gap between ends and means is the military intervention in Yemen launched in March 2015. This misadventure has yet to achieve the stated goals of defeating the Houthis and restoring Yemen’s legitimate government and has resulted instead in a fractured coalition and a humanitarian catastrophe.

Meanwhile, the Trump administration’s “maximum pressure” sanctions campaign has weakened Iran’s economy but hasn’t caused Iran to change course or the Iranian people to change their government. On the contrary, it has produced a counterreaction in the form of a “maximum resistance” policy that markedly increased the risk of military confrontation. Over the past 18 months, Iran and Iran-linked forces have:

U.S.-Iran tensions spiked last January after a U.S. airstrike killed Qassem Soleimani, head of Iran’s Islamic Revolutionary Guard Corps - Quds Force. Since then, there has been a pause in overt hostilities, but this respite is due as much to the COVID-19 pandemic as anything else.

How did we get here?

Of the numerous missteps either committed by or ascribed to the United States in discharging its role as “guarantor” of Gulf security, none has been as consequential as the invasion and occupation of Iraq. Far from having imposed a new regional order, the U.S. intervention in Iraq contributed to more regional instability and to Iran’s regional ascendancy. Since then, including in its responses to the 2011 Arab Spring uprisings, the policies of the United States have done little to convince Gulf partners of America’s competence or of its long-term commitment to the region. Coupled with the “rebalance to Asia,” these policies fed into the perceptions within the Gulf of U.S. disengagement, heightening their security anxieties and their ambitions.

Yet, it is important to emphasize that the security deficit in the Gulf stems not just from U.S. policy missteps and deficiencies but also from the pathologies and proclivities of the regional states. Since the 2011 uprisings, America’s Gulf security partners have worked to reverse the momentum of Arab political reform and exploit the fear of Shi’a ascendancy. The resulting regional realignments and proxy conflicts have exposed and sharpened intra-GCC perceptual and policy divergences. So, the GCC countries find themselves sharply at odds with each other, locked in confrontation with Iran, and seized by the twin fears of entrapment and abandonment by the United States.

What can we do about it?

Looking ahead, the United States could be a key player in arresting some of these trends. But the U.S. policy community has been trapped in a debate about America’s role in the world — a debate where the false choice often posed is between disengagement and a quest to sustain American primacy, and where internationalism is frequently conflated with military interventionism.

America’s unresolved debate about its role in the world has been reflected in its official statements and conduct regarding the Middle East, and has in turn contributed to the steady erosion of its credibility among traditional U.S. Gulf security partners. Credibility is a function of both perceived capabilities and perceived resolve. Unless U.S. leaders overcome the “resolve problem,” America’s Gulf partners will not find gestures aimed at “strategic reassurance” to be credible, nor, as a result, will the U.S. be able to assuage their concerns or temper their ambitions.

Gulf partners appear convinced the U.S has one foot out the door. Yet, paradoxically, U.S.-GCC security and defense relations remain extensive:

The Trump administration has repeated the pattern of its predecessors, sending mixed signals that have reinforced the impression that U.S. disengagement from the region is inevitable though perhaps not imminent, thereby undercutting American credibility. This has encouraged both risk-taking and hedging by America’s Gulf security partners, which are looking to the U.S. to be even more forceful in deterring Iran and at the same time to be more careful about provoking Iran.

Indeed, the GCC states have no good choices:

Even if the United States is in terminal decline, it will continue to play a central role in world affairs for the foreseeable future. The fixation on whether the United States is “disengaging” from the Middle East — and the preference expressed for it by some — obscures the need for a fundamental reassessment of American foreign policy in the region, including a clear articulation of how the Gulf fits into U.S. strategic priorities.

It is possible to conceive of, build a strong case for, and implement a form of American engagement in the Gulf and a partnership model that is restrained, sustainable, and effective. Doing so requires above all a clear-eyed sense of purpose. The departure point for reaching a firm middle ground is the identification of America’s core interests and a singular focus on goals the U.S. can reasonably achieve:

Second, it is important to emphasize that the price of continued U.S. involvement in the Gulf, properly crafted, need not be onerous. In fact, in recent years, the cost burden of American engagement in the Gulf has shifted, with the U.S. financial outlay and military deployments having dramatically declined and the defense costs borne by the Gulf states themselves having significantly risen.

Third, it is important to recognize that continued American engagement in Gulf affairs, including maintaining a modest military presence in the region, could yield strategic benefits. But allowing that a modest U.S. military presence in the Gulf may be essential for deterrence and reassurance purposes is not to endorse a military-first approach or a license for interventionism. It is possible to strike a balance between the judicious use of limited force where core interests are engaged and embarking on “forever wars.” Staying and fighting are not synonymous.

Finally, it is crucially important to engage the “full symphony of American power” in the Gulf, as elsewhere, especially by elevating U.S. diplomacy, and also by tackling military and non-military security issues with equal vigor and determination. Putting diplomacy first, in the interest of helping put the Gulf on a more stable and secure footing over the longer term, requires that the U.S. reengage Iran in nuclear diplomacy. It also requires strong encouragement of intra-GCC dialogue and facilitation of their efforts to reach an accommodation. It requires developing an agenda in consultation with Gulf security partners that focuses on regional issues — especially on non-traditional security issues that incentivize forms of cooperation that are non-threatening and might attract Iranian participation. There are a number of pressing issues where all the regional states’ interests converge, including in addressing climate change-related natural disasters and in preparing to tackle more effectively the next public health crisis.

Nevertheless, just as there is no “right-sized” American military footprint in the Gulf, there is no magic formula for American diplomacy that can guarantee regional security. Ultimately, it is the regional states that hold the keys to unlocking the fears, apprehensions, and mistrust that drives their insecurity.

Where the United States can be most helpful is not in the futile quest for quick breakthroughs but in employing creativity, guile, and persistence to reduce the scope for further escalation at moments of crisis; and to encourage and support conciliation and tension reduction initiatives both within the GCC and between the Gulf Arab states and Iran.

To be sure, the Biden administration’s top priority when it enters office will be managing the COVID-19 pandemic and economic recovery. For that reason and others (e.g., the June 2021 Iranian elections), it would be unwise to expect “results” during the first six months of the new year. But it would be equally unwise to assume that the Biden foreign policy and national security team — composed of seasoned pragmatists and multilateralists who are familiar with the players and the stakes — will remain idle. Rather, one can hope for, though perhaps not count on, their working behind the scenes to lay the groundwork for progress on both the intra-GCC and GCC-Iran fronts, including by enlisting the support of America’s Transatlantic allies.

In charting this path, the Biden team will have to contend with the mixed legacy of its predecessor. The multi-layered sanctions against Iran and the congressional opposition to removing them, though not insurmountable, have boxed in the incoming administration. By contrast, the Abraham Accords and 11th hour diplomacy by Jared Kushner to facilitate a Saudi-Qatar rapprochement have helped draw America’s regional partners closer together — a foundation that could be useful as an eventual platform for flexible, ad hoc forms of cooperation with Iran and as added insurance against malign Iranian conduct, but counterproductive if perceived as serving as a “loose united front” implacably hostile to Iran.

Indeed, absent such a course correction by the United States, it seems unlikely that the climate of animosity and contention in the Gulf will dissipate. Recent patterns in the security-seeking behavior of America’s Gulf partners, Turkey, and Iran reflect a shared impression of U.S. neglect and a determination to compensate for it — and exploit it — by projecting power abroad. As a result, the conditions of insecurity within the Gulf regional subcomplex have been reproduced throughout the wider region.

Attempts by interventionist regional actors are unlikely to be any more successful in imposing a durable regional order than was the United States in imposing a hegemonic order at the height of its power. Nor can conduct by Iran or Saudi Arabia that one of them perceives as a bid by the other to establish regional hegemony be expected to accomplish much, other than to reproduce insecurity.

There is an urgent need for a renewed U.S. engagement and the recasting of its role in Gulf affairs. The initial steps would be for the United States to acknowledge not just its limitations but the power and leverage it still possesses. Indeed, American interests would be better served and the prospects for enhancing Gulf markedly improved were the United States to invest the same time and energy in practicing preventive diplomacy as it has lately devoted to coercive diplomacy.

It is not inconceivable that the next administration will follow this path. If it does, the United States will have made some headway in restoring its credibility, setting ground rules for a new security partnership model, as well as in reestablishing and rebranding itself as a new kind of global leader.

Dr. John Calabrese teaches U.S. foreign policy at American University in Washington, DC and serves as a Scholar in Residence at MEI, where he directs its project on The Middle East and Asia (MAP). The views expressed in this piece are his own.