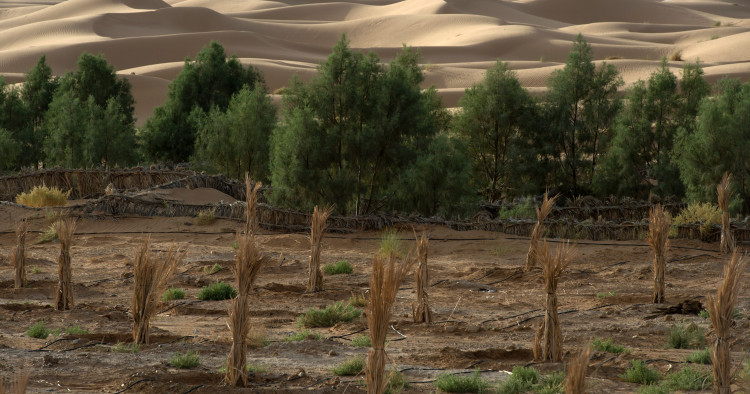 World leaders gathered recently in Sharm el-Sheikh, Egypt, for the 2022 United Nations Climate Change Conference (27th Conference of the Parties, COP27) to discuss their commitments to climate change mitigation and adaptation. This year’s conference came on the heels of the U.N. Intergovernmental Panel on Climate Change’s (IPCC) 6th Assessment Report. The IPCC report details the alarming changes that Mediterranean countries will experience in the coming decades. Below are some report highlights in three critical climate areas — warming and droughts, declining ecosystems, as well as socioeconomic and public health risks.

First, the Mediterranean region has been warming faster than the global average, and this accelerated warming trend, along with increasingly recurrent droughts, will continue as climate change worsens. More intense, more frequent, and longer heat waves will accompany this shift throughout the region. Precipitation is expected to decrease 4% for every 1°C of warming in central and southern parts of the region in all seasons. Current trends point to global warming of 2.7-3°C, possibly higher in the Mediterranean. While the northern part of the region will experience decreased precipitation mostly in summer, it will also see a higher risk of extreme rain events and flash floods as well.

In parallel to decreased overall precipitation and higher evaporative demand due to warming, both surface water and groundwater availability will decrease. Many lakes could potentially dry out completely without interventions. These forecasts point to a significantly drier Mediterranean region with heightened risk of more intense and frequent droughts under all climate change scenarios, which will be even more severe without mitigation.

Second, the Mediterranean Sea is acidifying rapidly due to the absorption of excess carbon dioxide in the atmosphere. As the sea gets warmer and more acidic in the coming decades, its marine ecosystem will suffer greatly. Many native species will either migrate north or face extinction, and some will be replaced by invasive species. As the risk of marine heat waves climbs with warming, there will be a greater possibility of mass mortality and ecosystem collapse events.

Terrestrial and freshwater ecosystems are also at peril due to climate change. A more arid climate will lead to the degradation of wetland and forests ecosystems. Wildfire risk will escalate due to more frequent and severe dry conditions, including heat waves and droughts. In the absence of forest management policies, average burned forest area will expand and recovery of these areas will prove more challenging. Desertification and forest dieback will become more widespread, particularly in North Africa.

Third and finally are the associated socioeconomic and public health risks. Along with other water users, agriculture’s water demand will increase due to warming and extreme heat risks. Reductions in available water will increase pressure on food production. Water scarcity is also expected to heavily impact energy production, especially hydropower and thermoelectric plants, reducing generation by up to 33% with 2°C of warming and possibly more at higher warming levels.

Heat waves will be the major source of climate-related health problems; in the northern Mediterranean, 53-93 million people are likely to be exposed to very high heat stress by 2050. Under worst-case climate scenarios, excess mortality due to extreme heat could increase six-fold under a 3°C warming scenario. Reduction in food availability due to climate change could increase malnutrition-related deaths by more than 20,000 in 2050.

Not all parts of the Mediterranean will experience climate change in the same way, but the IPCC report paints a bleak picture of the region’s climate future, even under moderate CO2 emission scenarios. However, the report also discusses various mitigation tools and makes it clear that it is still possible to stave off the worst consequences of climate change. Investing in the following areas will be essential for both mitigation and adaptation efforts:

COP27 provided a unique opportunity for leaders from the Mediterranean to discuss these solutions and chart a course of action to prepare for a hotter and drier future. The new Loss and Damage Fund created at the end of the conference, if managed properly, could be a valuable financing tool to implement these solutions. Solutions that can contribute to both development and climate resilience, such as solar and wind energy, water recycling, drip irrigation, and leak repair programs, can deliver climate adaptation and mitigation benefits while simultaneously supporting economic development. As climate change is already progressing, such multi-benefit solutions can play a critical role in alleviating the worst impacts — that is, if the region’s leaders choose to prioritize climate action to safeguard the Mediterranean’s future.

Gökçe Şencan is a research associate at the Public Policy Institute of California's (PPIC) Water Policy Center and a non-resident scholar at the Middle East Institute’s Climate and Water Program.