Where to now for Saudi-Iranian dialogue? 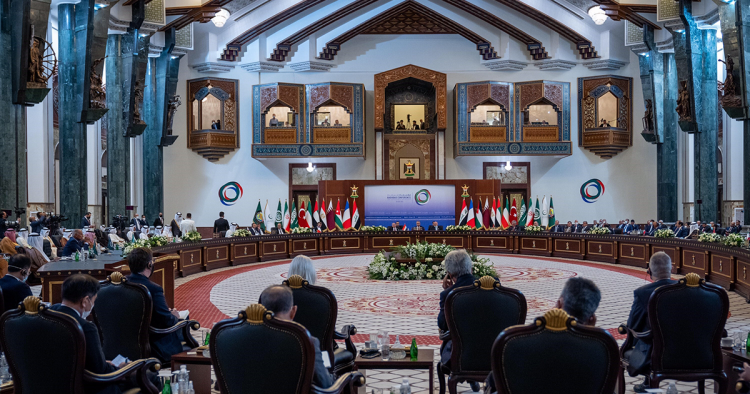 Iran is a neighboring country for Saudi Arabia and we from the Gulf states respect its people and culture, sharing many similarities as nations throughout different historical periods.

However, there are, unfortunately, profound disagreements that have significantly increased since the 1979 revolution because of Tehran’s foreign policy approach based on ideological promotion and projection.

Certain international figures and media outlets have wrongly argued that Gulf tensions are limited to superficial disagreements between Iran and Saudi Arabia. However, Iran also has deep problems with the other Gulf states, which vigorously resist Tehran’s Shiite geopolitical project.

This context is essential for understanding the latest developments in the four rounds of Saudi-Iranian dialogue hosted in the Iraqi capital over the past six months.

It seems clear that the meetings, which Saudi Foreign Minister Faisal bin Farhan recently described as exploratory, began one week after the visit of Iraqi Prime Minister Mustafa al-Kadhimi to Saudi Arabia in April 2021.

Al-Kadhimi reportedly pledged that Tehran is ready to reach a settlement with Saudi Arabia and to resolve the outstanding issues between the two countries.

However, Saudi Arabia cautioned their Iraqi guest during his visit as previous talks with consecutive Iranian governments all failed because the acts of the regime and its security apparatus, including the Islamic Revolutionary Guard Corps (IRGC), violated their spirit.

Given the dominant role of Iran’s security apparatus, it is understandable why dialogue began with them and not with the Iranian government. These bodies either have the final say over Iran’s foreign policy or are extremely close to the decision-making elite.

The Baghdad Conference for Cooperation and Partnership held by the Iraqi leadership at the end of September took place against the backdrop of Baghdad’s attempts to facilitate Saudi-Iranian dialogue.

Saudi Arabia is keen for regional stability in light of its ambitious vision for economic growth, engagement, and a zero-problems approach to dealing with its neighbors.

What are Iran’s motives? Why now?

There are many suspicions about Iran’s motives for trying to begin dialogue with Saudi Arabia, especially at the current time.

Perhaps its most important motive is to revive the stalled nuclear talks with the P5+1. After six rounds of talks, no genuine breakthrough has been reached. The parties involved are edging closer to the conclusion that the nuclear deal has died in light of Iran’s refusal to discuss regional countries’ demands, particularly over its ballistic missile program and belligerent behavior.

Therefore, against the backdrop of growing regional and international pressure, many observers of Iranian affairs believe that Tehran has begun to pursue a path to cosmetically resolve its disputes with the Gulf states directly, especially with Saudi Arabia.

Iran has launched a slick PR campaign utilizing its lobbyists in the West, as well as some figures inside Iraq, who have leaked misleading information about the outcomes of the dialogue with Riyadh. Following the Saudi-Iranian talks in Baghdad, Reuters quoted Iraqi officials who claimed to have participated. They asserted that an agreement had been reached to exchange diplomats, open diplomatic missions, and so on — in addition to building a railroad connecting Mashhad, Karbala, and Makkah. All of this is totally false and cannot be trusted in light of the failure of the talks to reach any genuine settlement on the security front.

The Iranian request to open a consulate in Jeddah may have been aimed at allowing its citizens to perform Umrah after unilaterally suspending this ritual in 2015. In addition, Iran has requested to send representatives to the Organization of Islamic Cooperation based in Jeddah. In my view, Saudi Arabia’s decision to consider the request has nothing to do with the tensions with Iran, but is a completely separate issue.

Another Iranian motive for pursuing talks is to convince the public at home that Ebrahim Raisi’s government is capable of resolving regional problems and reversing the country’s dire economic situation and isolation — unlike former President Hassan Rouhani and his diplomatic team.

Iran also has motives related to Iraq. It wants to keep many of the Iraqi figures with close ties to Tehran in control of Iraqi institutions and militias linked to the IRGC, especially in light of the growing popular unrest about Iranian interventions in Iraqi affairs that contributed to the October 2019 protests that swept across many Iraqi cities and provinces.

Given Iran’s motives for pursuing talks and the reality of the Saudi-Iranian dialogue, is Tehran willing to take true measures, rather than empty steps, to rebuild confidence with Riyadh? More broadly, the key question remains whether or not the Iranian leadership is really prepared to let go of the past and engage fruitfully in the regional order outside of its expansionist projects. To make real progress, Iran must first renounce its support for non-state actors operating from under its cloak and choose to genuinely work to reduce the tensions it is contributing toward across the region. I can only sincerely hope that it does so.

Mohammed Alsulami is the founder and president of the International Institute for Iranian Studies (Rasanah) in Riyadh, Saudi Arabia. The views expressed in this piece are his own.

Beyond the Bedouin path: The evolution of Emirati national identity