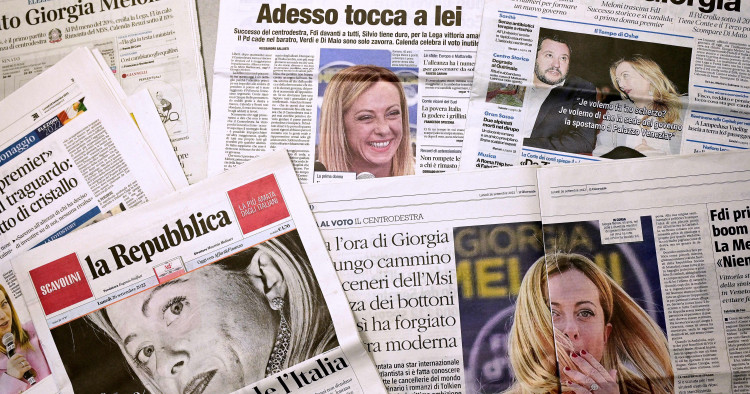 International trepidation about the new Italian government’s agenda is only partly justified. In a sign of defiance toward Italy’s recent technocratic course, Italians did elect the most far-right government of the postwar era in late September. Yet, the future might be marked more by evolution than drastic change, at least in the short term. This is especially true when it comes to foreign policy, which is not the new ruling coalition’s main focus.

Important changes are likely to take place on the domestic policy front, where political and social tensions may break out around crucial decision points, like tax reform. All three main parties that make up the governing coalition — Matteo Salvini’s League, Silvio Berlusconi’s Forza Italia, and Giorgia Meloni’s Brothers of Italy — have bold, sometimes radical, ideas about how to address the grievances of vast economic constituencies that feel they have been forgotten or left behind in recent years.

With forecasts increasingly pointing to recessionary dynamics in the Euro area from 2023, future Prime Minister Meloni will have the arduous task of squaring the circle among her less powerful but still vocal coalition partners, avoiding the possibility that too much heterodoxy might jeopardize continued support from the European Union. As a matter of fact, to the extent that Italy’s economic future hinges on the delivery of vast amounts of aid from Brussels — Rome secured the largest chunk of post-pandemic recovery money, totaling almost 200 billion euros between grants and loans — EU policy is the area where the nexus between domestic politics and foreign relations will be most consequential. Here, some friction is unavoidable, even if Meloni will probably try to pursue a constructive approach overall as she strives to project an image of a credible and reliable stateswoman.

When it comes to other areas of foreign relations, the new Italian government is expected to by and large stay the course. This applies first and foremost to the war in Ukraine. Meloni has been a consistent supporter of Kyiv from the time she was the leader of the only opposition party to the Atlanticist national unity government headed by Prime Minister Mario Draghi. Her allies’ possible hesitation about weapons transfers to Ukraine or the sustainability of anti-Russia sanctions are not to be underestimated. Yet Italy’s broad alignment with its NATO and EU partners will not be an issue, at least in the short term. Different perspectives could start to be voiced and pursued were the broader international context to change, in particular if a different U.S. administration ceased to exert the powerful mix of leadership and pressure the Biden presidency has delivered thus far.

One area in which there may be some uncertainty is Italy’s policy toward its southern neighbors across the Mediterranean. While it is too early to predict the scale of change, two possible dynamics could have a significant impact. One likely dynamic will be a strong securitization of challenges originating from the south, starting with migration management. Tough ongoing negotiations about the profile of the new interior minister indicate that members of the coalition consider it a key post for framing Italy’s new agenda. While her foreign policy views are not as extreme as her detractors would portray, Meloni has repeatedly called for a “blockade” to be enforced on Italy’s maritime borders as a way to stem uncontrolled migration — a fairly confrontational and probably impractical measure that would surely complicate Italy’s relations not just with its southern neighbors but also its European partners.

As a matter of fact, one key decision Meloni will have to make is whether to go back to the time — as in 2018-19 — when much of Italian policy toward the Middle East and North Africa (MENA) region was effectively decided by the interior rather than the foreign affairs minister, from a “homeland security” perspective. Together with a less securitized approach, the Draghi government, which came to power in February 2021, had significantly rebalanced Italy’s policy toward the MENA region. It reinvigorated diplomatic engagement and made Italy one of the leading actors in the complex discussions over the region’s lingering crises, starting with Libya.

Together with an “interiorization” of Italy’s policy toward the south, a second likely dynamic under the new government is more open competition with some of Italy’s European partners, signally France. There is no doubt that Italy’s and France’s interests have collided in recent years, especially on the Libyan dossier. While a degree of divergence may be unavoidable, particularly in light of competing economic and business interests, the Draghi government had successfully tried to mitigate antagonism as much as possible, finding in President Emmanuel Macron’s France a receptive interlocutor. In fact, against the backdrop of still not fully aligned MENA policies, Rome and Paris did reach a historic agreement — the 2021 “Quirinale Treaty” — to reinforce their bilateral partnership, leaving behind the tensions that had marked relations under some of the previous Italian governments.

Meloni the political leader is on the record for repeatedly calling out Macron, accusing France of using its Mediterranean policy to undermine the “Italian national interest.” Meloni the prime minister might now choose to adopt softer tones, but tensions are set to become more visible, and potentially less manageable, than in the recent past. French politician Marine Le Pen’s long-standing friendship with the Italian far right and recent endorsement is not the best ice breaker for a relationship that will have to be refashioned no matter what.

One area in which the new government will likely follow Draghi’s approach is the scramble for new energy agreements, especially with countries in MENA and Africa, in an attempt to wean off Italy from its erstwhile deep dependence on Russian hydrocarbons. Here, the new Italian government is broadly expected to continue using every available lever, in close cooperation with the country’s leading energy companies, to rapidly diversify Italy’s energy portfolio. Under Draghi’s leadership, such combined efforts had already allowed Italy to reduce its dependence on Russian gas from 40% to less than 20% in the first seven months of 2022.

Emiliano Alessandri is a non-resident scholar with MEI and an expert on Euro-Mediterranean relations with a focus on North Africa. The views expressed in this piece are his own.