A year after the defeat of ISIS in Iraq, what has changed? 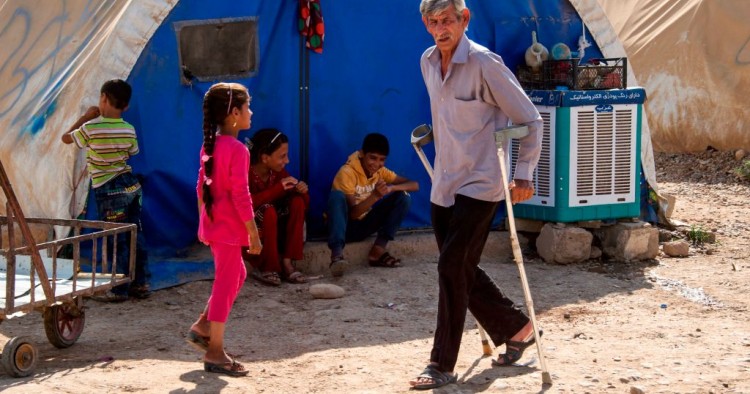 On Dec. 9, 2017, Iraq’s then prime minister, Haider al-Abadi, declared victory over ISIS in what was considered a national holiday for the country. In the year since then, however, Iraq has continued to face critical challenges. Although the victory brought an “initial” end to the extremist group’s territorial control in Iraq, it also gave rise to the biggest internally displaced persons (IDP) crisis in the country’s modern history and legitimized militias that have adopted the model of Hezbollah in Lebanon.

The threat of displacement and opportunity to return

From June 2014 to December 2017, over one-third of Iraq’s territory was controlled by ISIS, and more than three years of fighting did untold damage. Millions of civilians have been displaced, human rights have been violated, and cities have been destroyed. At the onset of ISIS’s campaign, some of the population of the provinces it took over (such as Anbar, Diyala, Kirkuk, Nineveh, and Salah Al-Din) decided to leave for safer cities elsewhere and became internally displaced. The intense fighting and severe destruction that followed forced those who were unable to flee earlier to leave as well. However, the victory of December 2017 did not mean that the IDPs could return to their homes. In fact, as of August 2018, more than a million IDPs were still living in camps. Around one-fifth of the displaced cannot return home because of the destruction and ongoing ethnic and sectarian tension.

Table 1 below breaks down the number of IDPs and returnees. This table tells us two things. First, in all of the listed provinces, except Anbar, more than one-fifth of the IDPs are still living in camps. Some of the provinces, such as Diyala and Kirkuk, have problems with ethnic and sectarian violence or tension between Arabs and Kurds and/or Sunnis and Shiites. In Salah Al-Din, some of those interviewed reported that they were threatened by Iraqi forces or militias because they have family members who joined ISIS, or were detained because of their ethnicity or sect. Second, the numbers also tell us that Nineveh has the most IDPs, significantly more than the other four provinces. The reason is that it is home to the second-most-populous city in Iraq, was the capital and last redoubt of ISIS, and witnessed the most severe fighting. Those factors have resulted in widespread destruction of houses and the displacement of more than a million people.

Table 1: IDPs and returnees by governorate (as of August 2018)

Nevertheless, even a year after the defeat of ISIS, plans to reconstruct the affected provinces and cities have not been carried out. Nationally, the budgets have not allocated enough funds to meet the needs of the destroyed provinces, even at the lowest levels. For example, both the 2018 and 2019 budgets have allocated about $1 billion for reconstruction. Internationally, during the Kuwait International Conference for Reconstruction of Iraq in February 2018, a number of states pledged a total of $30 billion in loans as “credit facilities and investment.” However, the World Bank put the total damage at $45.7 billion, and the need across all sectors is estimated at $88.2 billion.

ISIS’s control over many Iraqi provinces and cities was both a threat and an opportunity for the country’s militias. ISIS came extremely close to Baghdad in 2014, and that threat alarmed the Iraqi government and the public, which grew concerned that the extremist group could attack the capital or other southern Shiite-majority provinces if nothing was done. After the Iraqi army and security forces showed their weakness when fighting ISIS, Ayatollah Ali al-Sistani, the grand Shiite cleric, issued a fatwa calling on the public to take up arms and fight. This created an opening for the well-organized militias that were concentrated in Baghdad and the Shiite-majority provinces, many of which are proxies of Iran. These militias saw this as an opportunity to prove their legitimacy in two ways. First, they wanted to show their loyalty to the guidance of al-Sistani, and they wanted to be both accepted and respected by the public. Second, they were looking for a chance to show their readiness and ability to fight ISIS and defend the country better than its official armed forces. They achieved both goals.

Iraq’s victory against ISIS has largely been attributed to these militias, which have been dubbed the “holy” Popular Mobilization Forces (PMFs), and their success on the battlefield has aided their legitimization. This was furthered by the passage of a special law by the Iraqi parliament in November 2016, which institutionalized the militias by recognizing them as independent organizations and part of the Iraqi armed forces. But the militias wanted more than just de facto power; they also sought political representation. After the victory over ISIS, the political atmosphere in Iraq made that possible, and the parliamentary elections of May 2018 provided an opportunity to realize their goal.

The political entities that represent the militias, Sa’eroun, led by Muqtada al-Sadr, and Fatah, led by Hadi al-Amiri, won the most seats of any political party in the May elections, 54 and 47, respectively, out of a total of 329. Neither of the two coalitions had achieved such success in any previous election. Another interesting development was the number of seats won by the Fatah coalition in Sunni-majority/near majority provinces (see Table 2). There are two explanations for this. First, the number of IDPs was or is high enough to enable ballot manipulation, especially since many IDPs were unable to vote given difficulties reaching voting centers and providing the required identification, as well as issues with ballots that made fraud easier, particularly in unstable provinces. Second, the militias have set up offices or bases throughout Sunni areas that have enabled them to ensure their control over those provinces.

Table 2: Seats won by Fatah coalition in the Sunni-majority provinces

The militias’ success at the ballot box has given them de jure power as well, and made them the most powerful actors in Iraq on all levels. They have weapons and fighters at their disposal, official recognition, and parliamentary and governmental representation, meaning they are now able to impose their will through different means. As a result, Fatah and Sa’eroun were in a position to shape the current government, which was created according to their agreement, or rather lack thereof. After neither Sa’eroun, which led the liberal wing, or Fatah, which led the pro-Iran parties, could form a government following the May 2018 elections, they agreed to nominate a compromise candidate for prime minister, Adel Abdul-Mahdi.

The IDP crisis and the power of the militias both seem set to continue for the foreseeable future. As the militias are now among the most influential actors in Iraq, they are unlikely to let the IDPs return home or even allow true reconstruction to take place, with an eye to ensuring that no Sunni challenge can emerge to threaten their control. The militias have a vested interested in maintaining a weak government that ensures they are the dominant players domestically — a situation that also benefits their backer, Iran. A weak government makes it easier for them to impose their will politically, or by force if needed, while a strong one would restrict their freedom to act and make it harder for Iran to further its domestic and regional objectives (particularly in Syria, Lebanon, and Yemen).

The weakness of the government was made clear by the nomination of Abdul-Mahdi as prime minister. He is from a weak political party that won only 19 seats and cannot exert real power over most of the political parties or militias. As a result, this government will likely seek to avoid clashes with any political party that has a militia. For their part, the militias will have considerable leeway to carry out their agenda and pursue their goals, although this may ultimately increase the likelihood of intra-militia conflict as different armed factions vie for dominance.