“You’re all going to die”: Persuading Pakistan’s generals to see the light 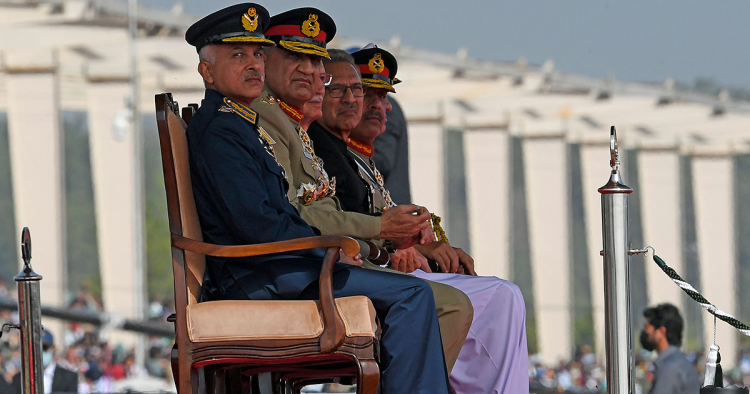 “You’re all going to die,” the diminutive, senior U.S. intelligence official observed in matter-of-fact fashion to her stunned Pakistan Inter-Services Intelligence (ISI) hosts. Her rather blunt appraisal was uncharacteristic of the engagement to which the senior Pakistani officials had grown accustomed and cut to the chase: the consequences of decades of Pakistan’s support to the Taliban, violent Kashmiri liberation groups, radical madrassas, and extremist local political groups were coming home to roost. “And where do you send your children for higher education?” she continued, knowing the answer was not Pakistan’s most prestigious schools, but rather to foreign universities safe from the violence at home. The U.S. intelligence official cautioned that the fire the generals had lit would surely consume them and their way of life, unless they acted soon.

Unwilling to acknowledge the Pandora’s box to which they had committed Pakistan since General Zia ul-Haq’s rule, the generals would not engage their guest on changing a direction they denied having taken. But even the generals had come to recognize their decreasing control over the violent forces they had unleashed. No longer able to dictate to their jihadi clients, with whom no love was lost, Pakistan’s generals had grown reliant on cajoling and leveraging cooperation from beneficiaries who perceived them as bullying, imperialist, and morally corrupt.

Still, when their turn came to speak, the generals cited a long, well-practiced list of grievances concerning U.S. policies, pointing to consequences Pakistan had incurred by having cooperated with Washington. The standard retort was an accusation of hypocrisy. The generals insisted that by having cooperated with the U.S., Pakistan had lost scores of thousands more in the war on terrorism than had America.

The Taliban's military victory will intensify Afghanistan’s civil war, increase the flow of refugees, and unleash the terrorist and insurgent groups with which the Taliban has long fought. And these groups include those like the Tehrik-e-Taliban Pakistan and Lashkar-e-Jhangvi bent on ousting the generals from power. Such a prospect makes any ISI claims of victory likely to be short-lived.

In truth, dating back to the 1990s, debate principally among the U.S. Departments of Defense, State, Energy, Treasury, and the CIA undermined a cohesive, whole-of-government approach to Pakistan. “What about the nukes?” The nightmare scenario was a military coup or popular uprising that might place the nuclear keys in the hands of jihadists. U.S. officials were committed to avoid such circumstances at all costs.

For well over 30 years, I watched Pakistani officials masterfully execute a denial and deception campaign that skillfully manipulated senior U.S. defense officials, diplomats, and visiting congressional delegations. Successive U.S. officials believed they had established personal rapport with their various Pakistani counterparts and found them reasonable, charming, and accommodating. Under their spell, U.S. officials came to believe that it was only the strength of Pakistan’s army which prevented chaos and disorder. The generals provided assurances that Pakistan remained America’s most reliable security partner in the region and teased limited engagement and access for U.S. experts offering training and technology to help assure Islamabad’s control over its nuclear inventory.

I sat through more National Security Council meetings and congressional oversight briefings than I care to recall which featured evidence of ISI support to the Taliban and other violent extremist groups. These were not rogue elements. High confidence reporting from across the community reflected the ISI’s complicity in protecting, financing, and enabling the Taliban, the Haqqani Taliban Network, and Lashkar-e-Taiba, among others, to draw American blood in the field and kill innocent civilians through terrorist attacks in Kabul and other Afghan cities.

ISI support included a counterintelligence campaign to root out and murder Western counterterrorist sources while harassing and physically threatening U.S. intelligence officials dispatched to work with them on counterterrorism. Frustrating as well was the ISI’s effort to prevent the U.S. from locating American hostages who the Taliban and Haqqanis held in Pakistan.

Still, the consensus among U.S. policy makers across both Republican and Democratic administrations remained the same. They would rather the lesser price of America’s losses in Afghanistan and endure the ISI’s harassment, intransigence, and double dealing than incur war with a jihadist, nuclear-armed Pakistan. Those convinced of this argument pointed to transactional achievements like the land and air lines of communications into Afghanistan supporting the U.S. war effort. But post-9/11 counterterrorism cooperation, albeit incentivized by many millions of dollars, in detaining and transferring high-profile Arab al-Qaeda leaders such as Khalid Sheikh Mohammed, had long since ended, and well before the May 2011 U.S. operation that found Osama bin Laden suspiciously living comfortably in Abbottabad.

While it’s too late to reverse the tide in Afghanistan, American goals should be reducing the risks of further conflict in the region and shoring up Pakistan’s resistance to extremist influences and the nightmare scenario itself: a takeover by the jihadist organizations and their sympathizers the government long enabled. The reality remains that there is room to press Pakistan’s generals while they still can take constructive action without instigating the country’s collapse into jihadist chaos or breaking the bilateral relationship.

Despite its increasing economic reliance on China, global realities necessitate American support for Pakistan with a host of international financial institutions. And U.S. economic and humanitarian programs are also substantial. Pakistan’s army rules, however, by maintaining the illusion of omnipotence and omniscience. Any exposed weakness makes them feel vulnerable. Influencing their behavior, then, means hitting them where they live while taking on the larger Indo-Pakistan dynamic.

Perhaps an unusual truism unique to Pakistan is the failure of the “carrot and stick.” Pakistan’s military leaders often saw an American “carrot” as sign of an exploitable weakness that further encouraged them to double down, rather than compromise. The generals respond better to the “stick” of being embarrassed, particularly at home, and in having their personal riches threatened. Pakistani elites routinely dispatch their children, and no small portions of their often-ill-gotten finances, to the West. The prospect of a terrorist designation has tangible economic, political, and personal repercussions.

But nothing worries the generals more than unilateral U.S. military or covert operations on Pakistani soil. The 2011 Abbottabad raid and the 2016 strike that killed Taliban Amir Mullah Akhtar Mansoor countered the generals’ narrative of omnipotence. They increased both popular anger among the masses, and dissent within the army’s own ranks — the nagging conspiratorial sentiment suggesting that the army is either weaker than depicted, or the generals had been complicit with their American masters.

A “maximum pressure” policy alone without an off ramp from spiraling escalation is likely to force the generals to harden their stand. Such measures should at least be quietly telegraphed as among the suite of options that might be selectively ramped up, or eased back, depending on Pakistan’s behavior. And U.S. deliverables of aid, training, and support for issues dear to Pakistan work best when not tied to any transactional “ask,” but rather as occasional recognition of positive bilateral trends.

Realistically, the U.S. alone is unlikely to succeed. But if international collaboration is required, the most feasible approach is quiet, back-channel collaboration with India, China, and possibly the Arab Gulf monarchies, in dialogue with Islamabad. Only the present timing and circumstances don’t align well to such a venture. And Iran, while happy to see U.S. troops and intelligence personnel out of Afghanistan, will be a wild card. Tehran can’t help but be uneasy with the Taliban’s consolidation of control along their border, having nearly gone to war with the antithetical regime that murdered nine Iranian diplomats in 1998 and prosecuted a genocidal campaign against Afghanistan’s Shi’a minority Hazaras. And as it is, Iran’s relations with Pakistan are at best frosty.

India’s President Narendra Modi, who has championed a Hindu nationalist, anti-Muslim platform to expand his political base, is unlikely to indulge public measures which make him appear weak. But India would not be well served with a jihadist-led Pakistan. And its economic achievements are already threatened by years of underinvestment in its military to counter a more aggressive China. Still, possibilities remain. Modi recently made conciliatory comments concerning Kashmir, his government confirmed opening a channel with the Taliban, and the U.S. has improved the bilateral relationship, much to Pakistan’s and China’s chagrin.

China’s financial leverage over Pakistan is a double-edged sword were Islamic radicals less concerned with prosperity and ready to support China’s repressed Uyghurs to seize power. The U.S. might secure greater collaboration reducing the subcontinent’s tensions in becoming more practical in supporting, rather than opposing, China’s Belt and Road Initiative, using this program for which America can offer no alternative for its own security interests. At the same time, the U.S. could continue advancing bilateral security and economic arrangements with New Delhi as a counter to any potential Chinese regional military and territorial aspirations.

Pakistan is also dependent on direct financial support from the Arab Gulf states and likewise remittances from its millions of Pakistani expatriates — a labor force that would otherwise be unemployed and discontent at home. But the Gulf states are increasingly moving to lessen their dependence and security risks from this large pool of expatriates. Moreover, Pakistan and Saudi Arabia have spatted in recent years and Saudi Crown Prince Mohammed bin Salman remains somewhat bitter over Islamabad’s unwillingness to commit troops to his war in Yemen. Although Kashmir resonates emotionally with Gulf Arabs, their monarchs are expanding their economic ties with India and might see value in a role that would have the incidental benefit of gaining favor with the Biden White House.

A multilateral effort such as this would require a complicated, expertly choreographed mix of measures that served the various parties packaged so that all might proclaim victories at home to justify perceived concessions or redirection. The U.S. would need to manage it all without appearing to validate Pakistan’s lack of democracy, corruption, and dismal record on human rights, caving in to China, or validating Modi’s Muslim repression and direct rule over Kashmir — not an easy task. The reality is that things in Pakistan might need to get a lot worse before the various parties feel pressed to make concessions. And with the Taliban now in control, many a nervous Pakistani general understands that could come much sooner than expected. Only by then, it might be too late.

Douglas London is a retired CIA Senior Operations Officer who served over 34 years in the Clandestine Service, was a Chief of Station and the Agency’s Counterterrorism Chief for South and Southwest Asia. He teaches at Georgetown University, is a Non-Resident Scholar at MEI, and is the author of the book “The Recruiter,” concerning the CIA’s post 9/11 transformation. Follow him @DouglasLondon5. The views expressed in this piece are his own.