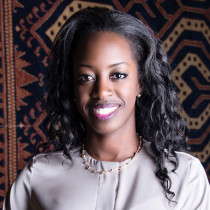 Ambassador Kamissa Camara is a Senior Advisor for the Sahel at the United States Institute of Peace (USIP). She is a Sub-Saharan Africa policy analyst and practitioner with close to two decades of professional experience. She most recently served as Chief of Staff to the President of Mali, Minister of Foreign Affairs, and previous to that, Senior Foreign Policy Advisor to the President.

Prior to working with the Malian Government, Camara held leadership positions in Washington, DC with the International Foundation for Electoral Systems (IFES), the National Endowment for Democracy (NED), and PartnersGlobal. At NED, Camara co-founded and co-chaired the Sahel Strategy Forum. She also spearheaded a multi-million dollar program supporting civil society initiatives in West and Central Africa, with a particular focus on the Sahel.

From 2015 up until 2018, she was the Sahel and Sub-Saharan Africa Instructor at the State Department’s Foreign Service Institute, where she trained U.S. diplomats before their posting in the region.