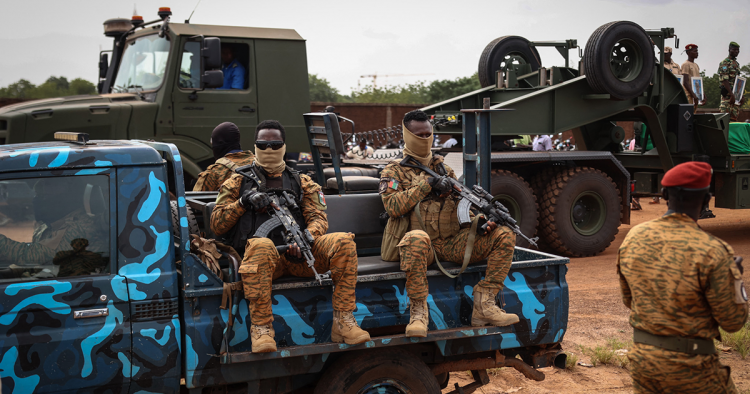 Over the past two years, the steady expansion of terrorist and fundamentalist threats in the Sahel has not gotten the attention it deserves given the region’s repeated military coups and political turmoil. Due to the apparent contagion effect of military coups, the political instability in the Sahel has resulted in a regional and international focus on electoral timetables and constitutional rule while overlooking the rise of terrorist groups, which continue to gain ground and menace the very existence of Sahel countries.

As the region’s closest neighbor and a country whose security depends on that of the Sahel, Algeria has been missing in action. Long hailed as a critical actor for peace and stability in the region, Algeria has been noticeably much less engaged across the Sahel, especially under its new military leadership, in the post-coup period. As a result, its visibility and influence as an essential player have slowly faded. Yet Algeria’s regional diplomatic clout, military might, and experience in fighting terrorism could help Sahelian states ward off an imminent political and security collapse. Here are four reasons why.

1. Algeria has a successful track record in defeating terrorism.

During Algeria’s civil war (1992–2002), the Algerian government successfully defeated militant Islamist groups, including the Salafist Group for Preaching and Combat (GSPC), which was later revived in Mali as al-Qaeda in the Islamic Maghreb (AQIM). Algeria's more recent counterterrorism activities and initiatives on the domestic level aimed at countering extremist ideology and narratives in the media, schools, and mosques were also highly successful. As such, Algeria’s long history of fighting domestic terrorism could prove useful in the Sahel, where actors are similar to the ones Algeria combatted in the 2000s. Since that time the context has changed, however: In addition to AQIM’s exponential growth in size, geographical reach, and operational capacity, terrorist groups have multiplied as nebulous entities, making the Sahel a very different battleground than Algeria was.

Signaling a significant uptick in terrorist activity in the region, in late July, a video circulating on social media showed a member of the Jama'at Nasr al-Islam wal Muslimin (JNIM) jihadist organization explaining in Bamanan, Mali's national language, that the country’s capital would shortly be the target of the group’s expansionist efforts. After enumerating and claiming a series of terrorist attacks all over Mali in recent months, the video also confirmed that JNIM’s end goal is to impose sharia law in the country. Recent battles between JNIM and the Islamic State in the Greater Sahel (ISGS) throughout Mali confirmed the struggle for leadership that both terrorist organizations are waging in the southern and central parts of Mali and in neighboring Burkina Faso and Niger. The increasing intensity of terrorist battles in the Sahel is threatening the very existence of the region’s countries, given the weakness of its national armies, the exhaustion of international efforts to assist them, and the growing political instability. Algeria’s southern border is at risk. The country should act soon.

2. France’s departure from the Sahel could create a window of opportunity for Algeria.

On Nov. 9, 2022, President Emmanuel Macron announced the official end of Operation Barkhane, an eight-year-old regional military operation based out of Ndjamena, Chad, whose objective was to combat terrorism on a regional level. Since the creation of Barkhane, anti-French sentiment has consolidated throughout the Sahel because of the former colonial power’s inability to defeat the terrorist threat and its perceived interference in local politics. The vacuum created by France's military drawdown could easily be filled by Algeria, which has been reticent to implement a joint strategy alongside other international actors. Algeria could turn France’s departure to its advantage and thus solidify its role as a widely respected regional power.

Algeria shares close to 3,000 km of borders with Mauritania, Mali, and Niger and has publicly and formally expressed its desire to restore stability in the Sahel region. In 2014, Algeria took on the role of negotiator and facilitator in the peace talks between Mali’s government and former secessionist rebel groups that had taken up arms against it in 2012. Following the signing of the Mali peace agreement in 2015, which was a regional diplomatic triumph for Algeria, the country was subsequently pigeonholed into ensuring the effective implementation of the deal, while France took the lead on the security front, giving it greater visibility than any other foreign power in the region.

Conversely, after the 2020 military coup in Mali, relations between Mali and France soured, reaching a break when the Malian transitional government expelled the French ambassador from Bamako in early 2022, after Foreign Minister Jean-Yves Le Drian called the Malian junta “illegitimate” and “irresponsible.” In August 2022, at the request of the Malian military government, the French military closed its last base. Amid ominous signs of military and diplomatic failure in the region, France redeployed a reduced number of troops to neighboring Niger to demonstrate its continued engagement in the fight to eradicate terrorism from the Sahel.

As Mali, Niger, Mauritania, Burkina Faso, and Chad’s former colonial power, France has been deeply involved in the survival and stabilization of an increasingly volatile Sahel region for the past six decades. France's 2013 military intervention in Mali prevented the country from falling into the hands of jihadists, who had taken over major cities and were making their way toward Bamako, Mali’s capital. More recently, however, France’s strategic, operational, and diplomatic failures in the Sahel have made it an unwanted guest in the region at large. Algeria, by contrast, could be the only regional player whose military is at the same time both respected and misunderstood for not providing direct support to its Sahelian neighbors, even when it is asked to do so.

3. Without Algeria’s buy in, security initiatives in the Sahel remain incomplete.

The multiple military and intelligence cooperation initiatives that were undertaken between the Sahel and the Maghreb in the face of the growing terrorist threat in the former are a testament to the intertwined and interconnected security concerns both regions face. Unfortunately, leadership rivalries and strategic differences have consistently undermined such efforts. It is high time to restructure regional security initiatives in the Sahel and make space for Algeria, an immediate neighbor whose security interests overlap with those of regional states.

In October 2022, Algiers hosted an ad-hoc meeting of the Joint Military Staff Committee (CEMOC) just a month after Algerian Foreign Minister Ramtane Lamamra visited Mali to appeal for its revival. An Algerian initiative established in 2010, CEMOC includes Algeria’s Sahel neighbors Niger, Mauritania, and Mali. CEMOC never really took off and slowly died after the creation in 2014 of the G5 Sahel, a regional security grouping — strongly encouraged by France — to combat terrorism in border areas of the Sahel region. Although the G5 excluded Algeria, it included CEMOC member states Niger, Mauritania, and Mali, along with Burkina Faso and Chad. Once again, France's leadership of the G5 trumped Algeria's leadership of CEMOC, in much the same way French military leadership in Mali reduced Algeria’s strategic space post-2012.

Despite its promise as a regional security initiative, the G5’s death was solemnly announced by President Mohamed Bazoum of Niger last May, following Mali’s withdrawal, which prevented effective coordination and intelligence sharing between these Sahel partners’ military forces. During its eight years, the G5 Sahel struggled to find a sustainable mechanism to fund its operations. Notwithstanding a holistic vision of complementing its military intervention with large-scale development projects to reach the most vulnerable populations, it had limited success on the ground. The membership of the G5 Sahel made perfect sense, yet Algeria’s absence may have weakened it considerably. The G5’s call for sustainable funding through the United Nations was ineffective, and Algeria's military and diplomatic savoir-faire might have helped.

Moving forward, a revised G5 Sahel mandate, mission, and composition, which would now include Algeria, might be an immediate and effective solution to the debilitating terrorist threat facing the Sahel. Leveraging and consolidating the voices of both the Sahel and the Maghreb on the international scene could generate the type of broader global response that Sahelian states have been waiting for. CEMOC’s unique advantage had always been institutionalized security cooperation between Algeria and the Sahel. This integrated security cooperation now has to become a reality.

4. Algeria wants to play a stronger diplomatic role. It can begin in the Sahel.

The recent visits to Mali of Algerian Foreign Minister ﻿Lamamra and the U.N.-mandated High-Level Panel for Peace and Development in the Sahel may signal Algeria’s willingness to resume engaging in the region in a more significant way. Algerian President Abdelmadjid Tebboune has paved the way for this through a constitutional amendment allowing Algeria's military to deploy outside the country’s borders. While it is unlikely that Algeria will immediately put boots on the ground in the event of an existential attack against a Sahel neighbor, that is now a possibility.

Algeria’s relationship with the countries of the Sahel has evolved significantly over the years. Since the 2015 signature of the Peace Accords between Mali and former armed rebels, Algiers has deepened its involvement in the implementation of the agreement. Its more recent efforts have focused on diversifying its partnerships in the region beyond security to include trade, professional training, energy, mining, and telecommunications. Algeria’s most significant investment in the Sahel may be the Trans-Saharan Highway Project, which aims to link Algiers to Lagos via Tunis, Bamako, Niamey, and Ndjamena. Algiers’ $3 billion investment in the project provides the country with solid regional leverage. But power is nothing without influence. These additional economic tools that reinforce the mutual dependency between Algeria and Sahel states, together with its strategic and military capabilities, will facilitate Algeria’s rise as an indispensable actor in the fight against terrorism in the Sahel.

Kamissa Camara is a non-resident scholar at the Middle East Institute and a senior visiting expert for the Sahel at the United States Institute of Peace. She is currently pursuing a Ph.D. in political science at the University of Oxford. She tweets @kamissacamara.