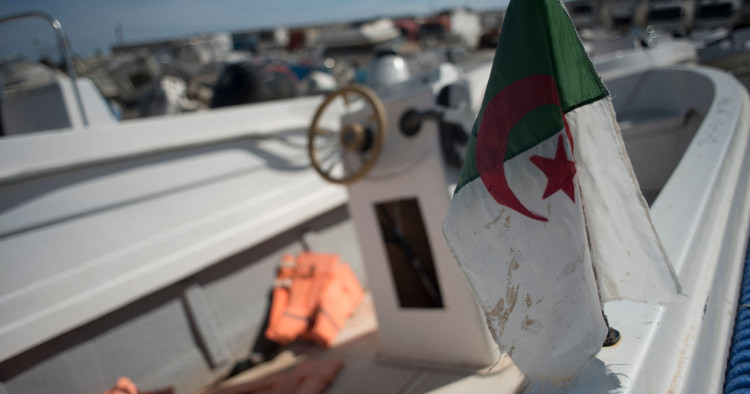 On Oct. 12, two young children died when a boat carrying them and other clandestine migrants from Algeria to southern Europe capsized. A month earlier, on Sept. 12, Spanish media reported mass arrivals of other harragas, as they are colloquially known, with more than 900 undocumented people attempting to reach Spain’s coast onboard dozens of small boats. The numbers set a daily record, but the growing wave of Algerians trying to make this perilous journey is by no means a new development. In 2021 alone, Spanish local authorities registered 10,000 irregular entries from Algeria, a 20% increase from 2020. These trans-maritime voyages from North Africa often result in causalities, reaching at least 309 deaths in 2021, and severe trauma, even for those who succeed in crossing the Mediterranean. The mass migration is also a harsh reminder of the bleak political and economic situation in which Algeria finds itself three years after the 2019 protest movement sparked hope for fundamental change.

To be sure, illegal immigration is a deeply rooted and complex issue across North Africa. Various socio-economic grievances, including unemployment and corruption, are the primary drivers of migrants’ pursuit of a better future abroad. But beyond the year-on-year uptick in numbers of individuals attempting the arduous journey to Europe, observers have also noted more recent changes in the dynamics of clandestine migration: more women and minors have been setting out to cross the Mediterranean, and they are increasingly motivated by factors other than a search for socio-economic relief. The Algerian authorities’ response has, so far, proven controversial and inadequate, unable to address a problem that could become an even bigger point of contention between Algiers and its Southern European partners. Hence, it is important to examine this security challenge in a more holistic way, considering both the sociopolitical factors and the policy shortcomings that drive migrants to leave their homes in the first place.

In 2019, millions of Algerians rose up to call for radical and peaceful political change, ultimately leading to the resignation of the ailing President Abdelaziz Bouteflika and the replacement of his scandal-ridden and corrupt government. The diaspora played a major role in the popular mobilization, which came to be known as the Hirak, and some even intended to return home after years of exile. This raised hopes that Algeria’s long-term brain drain, which reportedly cost the country 50% of its qualified workforce over the past 40 years, might finally be reversed. Algeria’s ruling elite dashed these hopes, however. Instead of carrying out real reforms, it changed its civilian façade, nurtured new client groups, and implemented selective repression. Today, the country is stagnating, and promises of a “New Algeria” do not reflect the population’s daily life and struggles. This disappointment has fueled years of growing migration among younger Algerians, who no longer identify with the authorities’ narratives and agendas and see leaving the country as their only chance.

The partial failure of the Algerian Hirak gave rise to a new repressive environment. Since the protests, the authorities have reconsolidated their hold on power by pressuring and incarcerating opposition figures and activists, causing frustration among leading opposition political parties. President Abdelmadjid Tebboune initially vowed to safeguard individual and collective liberties, but about 300 people remain in jail for their political opinions. Algiers also postponed the scheduled visit in September 2022 of the United Nations special rapporteur for freedom of assembly and association, in a move condemned by local actors as an attempt to cover up authoritarian practices and disregard the country’s international commitments. Business figures like Nabil Mellah, who drew attention to Algeria’s considerable entrepreneurial potential, were not exempted from the authorities’ extreme punitive sentences. Such crackdowns and constraints have dashed all hopes for the future among Algerians and have further encouraged educated youth and their families to leave their homeland in search of dignity, freedom, and opportunity.

Algeria’s latest migration wave may additionally reflect social pressures on and oppression of local women. During the era of former President Bouteflika, domestic conservative movements managed to more thoroughly impose their ideology on the Algerian population, especially in rural and disadvantaged areas. Widespread adoption of the establishment’s despotic narratives and practices undermined Algerians’ capacity to democratize their national institutions and created a toxic social environment, characterized by paternalism, sometimes violent sexism, and discrimination. In that sense, illegal immigration could constitute the only way to escape from this mentality for those whose lives do not necessarily align with current social norms and traditions. Algeria is undergoing a deep generational shift that affects generally accepted mores, and this trend regularly manifests itself in the ongoing exodus. Then-Prime Minister Ahmed Ouyahia implicitly admitted as much in 2018, but the authorities continue to offer only temporary remedies, including a set of ineffective security arrangements.

In June 2022, Algerian Minister of Justice Abderrachid Tebbi announced the government’s plan to strengthen penalties against illegal immigration networks. Minister Tebbi added that young people who are victims of these networks will be provided psychological and social assistance. These methods do not differ much from previous improvised policies, such as building concrete walls to prevent smuggling networks in coastal cities like Oran from accessing and using beaches for their activities. The authorities’ focus on security measures demonstrates a lack of understanding of the underlying sociopolitical drivers. Additionally, it suggests that Algiers has yet to develop a comprehensive plan to prevent this crisis or mitigate its consequences and continues to resort to short-term strategies.

Smuggling networks are not the only target of the security forces. In fact, Algerian legislators already criminalized clandestine migration in 2009. According to article 175 of the penal code, irregular migrants may face sentences of up to six months in prison and receive heavy fines. The security forces also increased their interception of migrants’ boats — missions that sometimes resulted in violent and repressive treatment. Algiers views the Mediterranean region as an integral part of its national security domain. As a result, it adopts a strict approach that may not take into consideration humanitarian concerns or migration trends and is better suited to dealing with issues like drug and human trafficking.

Reflecting this approach, Algeria has deployed significant military and civilian resources to solidify control over its maritime borders. The armed forces monitor the flow of illegal migrants as well as the activities of organized crime networks involved in facilitating it. But regional cooperation on tackling these issues is as important as domestic reinforcements. Nonetheless, due to the recent dispute with Spain over Western Sahara in March 2022, the Algerian government is reportedly keeping security cooperation to a bare minimum. Moreover, the repatriation of irregular migrants from Spain has been on hold for several months as Algiers suspended the two countries’ 2002 friendship treaty last June. Diplomatic tensions with Madrid and potentially other European partners on this dossier may aggravate the situation and could potentially lead to a humanitarian disaster.

Clandestine migration is slowly becoming the norm across the Mediterranean region. Algeria, as a transit hub, sees firsthand both the involvement of organized crime syndicates in migration as well as the effect of conflicts in neighboring countries. Furthermore, this exodus now involves all segments of society, including children, which naturally increases the repercussions and human cost of these routes. Addressing irregular migration requires an inclusive and smart national policy as well as bolder regional efforts.

Algiers’ strategy at the local level must first acknowledge the sociopolitical origins of this tragedy. Young Algerians choose to gamble their lives on the chance of a better future abroad instead of taking seriously the government’s promises of reform at home. This fact alone should prompt Algerian officials to dramatically change course: to move away from their current security-focused approach to migration and instead launch a national dialogue that would draw on contributions from all domestic actors, particularly civil society and academia. If it continues on its current path, the government will be unable to resolve the issue since its actions are already counterproductive.

Finally, it is crucial that Algeria consider the regional context and take steps to ease international cooperation on these shared issues. Transnational challenges require multilateral solutions, and Algeria’s reluctance to engage fruitfully with its African and European neighbors beyond rhetorical statements is not a promising start. As long as there are major tensions across the Mediterranean Sea, a lack of dialogue and cooperation will only enable migration networks to grow as well as facilitate their instrumentalization by organized crime.

These migrants, especially the youth segment, have generally been seen either as a liability at home or a threat abroad. It is time for the Algerian authorities to look at them differently, as active and key actors in shaping their own fate. Clandestine transborder migration will only worsen until Algerians are incentivized to contribute to their own country’s sociopolitical and economic development without social limitations or fear of systemic reprisals. The onus is on the government to take the corrective first steps.

Zine Labidine Ghebouli is a political analyst and postgraduate scholar at the University of Glasgow. His work focuses on Euro-Mediterranean cooperation and Algeria’s political and security dynamics.