Can a new EU strategy bring EU and Gulf actors closer together? 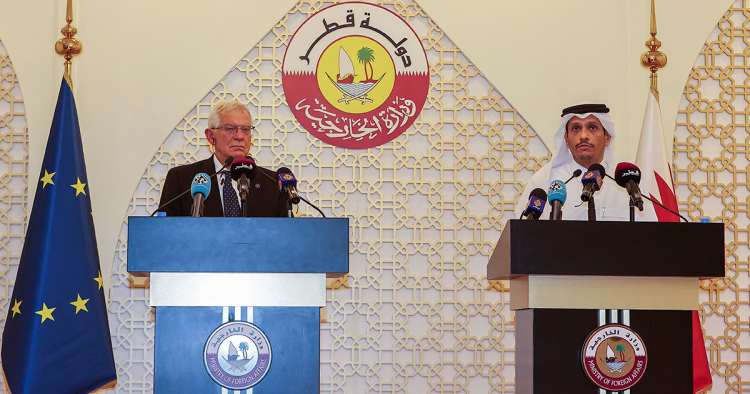 Relations between the European Union (EU) and the Gulf countries have been on life support for a long time. Ever since an early push for a free trade agreement between the EU and the Gulf Cooperation Council (GCC) foundered in 2008, few serious efforts have been made to revive the relationship. Instead, the two sides have become experts at talking past each other, blithely skidding from crisis to crisis. Whether it is Iran’s nuclear threat, the Houthis in Yemen, the Libyan civil war, or Russia’s invasion of Ukraine, it has often been difficult for the EU and the Gulf to find a joint perspective or a common cause.

This is despite the fact that both sides share many interests. As together they represent 20% of global GDP, both Europe and the Gulf are among the main beneficiaries of globalization and have a common interest in preserving a rules-based international order and secure sea and land lines of communication. Also from that perspective, both stand to benefit from peace and stability in their shared neighborhood. The breadth of these common interest is often articulated during the EU-GCC Joint Council and Ministerial meetings, the 26th session of which took place in February 2022.

But none of those shared interests have generated an urge to take cooperation to any significant level beyond the bilateral ties of individual countries. Instead, the relationship has generally been characterized by mistrust and misconceptions. In the Gulf, the EU’s “soft power” approach and value-loaded language is seen as naïve and intrusive; in the EU, the militaristic posturing and zero-sum politics of the Gulf are seen as authoritarian power politics. Neither side has had enough patience and leadership to bridge the divide, with major EU member states happily managing their bilateral affairs around the EU.

Until now that is. On May 18, the EU made the first serious effort in a long time to bridge this gap, by introducing a proposal for a “Strategic Partnership with the Gulf.” The proposal by the European Commission, still to be deliberated by the European Parliament and EU member states, identifies six areas for enhanced cooperation: prosperity, the energy transition, global security, humanitarian aid, people-to-people contacts, and institutional relations.

The proposal comes at a time of growing concern in Brussels and Washington about the Gulf’s steady drift toward China and Russia. It also coincides with the realization in Europe that the EU’s ambitions for a carbon-neutral future, ironically, may require more cooperation with the world’s largest carbon producers. In this context, the EU’s proposal represents an effort to sharpen its regional profile and relaunch itself as a strategic partner for the Gulf countries.

To do so, the EU puts forward a laundry list of ideas and suggestions, including some evergreens such as reviving negotiations for a trade agreement and facilitating a regional security dialogue. However, the strategy also seeks to break new ground in a number of ways.

First of all, it pledges to significantly enhance the EU presence in the Gulf. The EU’s representation is to effectively double, through the opening of a new delegation to Qatar, a possible EU delegation to Oman, and an EU ambassador to the GCC. In addition, the EU will nominate a special representative for Gulf security, to better engage GCC countries on regional security issues, and there are considerations for an EU Chamber of Commerce in the Gulf to facilitate business ties. These efforts are important as they will enable the EU to become more visible in the Gulf and help reinforce EU cohesion on the ground. However, it remains to be seen whether Gulf countries will reciprocate by upgrading their own diplomatic representation in Brussels, where the current direction is mixed. At present, not all Gulf countries have a separate mission to the EU and the number of Gulf diplomats accredited to the EU remains comparatively limited.

Second, the green energy transition will emerge as a new central focus for EU-GCC relations. On the one hand, the EU is eager to tap into the enormous renewable energy potential that Gulf countries offer to help ease Europe’s transition to a carbon-neutral future. Much has already happened on the bilateral level between European and GCC countries and the EU is in some way playing catch-up here. On the other hand, the EU wants to muster the financial spending power of the Gulf states in order to jointly help poorer countries transition toward renewables. To help bring this about, various working group and dialogue formats are being proposed, as well as potential trilateral projects. More immediately, however, the focus is likely to be on what the Gulf countries can do to help the EU wean itself off of its dependence on Russian oil and gas — while keeping in check the rise in oil prices.

Third, the EU pledges to play a greater political and security role in the Gulf. The appointment of the aforementioned EU special representative for Gulf security will be supported by an annual EU-GCC political dialogue, consultations on multilateral issues, and sectoral ministerial meetings. In addition, the EU envisages a new cooperation mechanism on maritime security, as well as enhanced cooperation on counter-terrorism, countering violent extremism, and cyber security. While these efforts represent a good start, the EU is likely to find it difficult to make headway in these areas, given political differences on multiple fronts, from arms exports, to human rights, and privacy concerns. Nevertheless, enhanced engagement, away from the public gallery, may help on these issues.

Finally, the EU seeks to forge close people-to-people ties with the Gulf countries. Here the pledge for visa-free access to the EU for Gulf citizens and greater educational cooperation through the EU’s Erasmus+ program appear most promising. While EU proposals in this area dovetail with the GCC’s recent focus on youth and gender, its people-centric approach and efforts to share best practice on various social issues are likely to evoke limited enthusiasm with the more hierarchically-organized Gulf countries.

All in all, these proposals, along with various other suggestion made in the strategy, provide an important starting point for reviving EU-GCC relations. They amount to an acknowledgment by the EU of the Gulf’s growing strategic importance and they offer a number of new ideas that may help to ease enduring EU-GCC tensions, while re-focusing attention on shared concerns.

But the proposal remains lacking in other aspects. For starters, it fails to develop a clear vision or trajectory for EU-GCC relations. In stark contrast with the optimistic development visions adopted by many of the Gulf countries, or their partnerships with third countries, it contains no topline goals, fixes no concrete targets, and develops no political vision of its own. Instead, in typical EU style, it loses itself in the technical details of dialogues and initiatives. This, unfortunately, will do little to capture the attention and ambitions of Gulf partners.

Oddly, the strategy also provides very little attention to what is a strength of the EU and a growing focus of the Gulf countries — namely cooperation on research and innovation. While GCC partnerships with other third countries are habitually filled with plans for large-scale cooperation on everything from blockchain, to artificial intelligence, and quantum computing, the EU strategy offers a meager paragraph on research and innovation along with a similar one how the GCC can join EU space programs. This, unfortunately, seems like a lost opportunity. With Gulf countries making strides to establish themselves as leaders in diverse areas such as artificial intelligence, the digital economy, food tech, and biotechnology, as well as plans for establishing advanced industries, a case could be made for a more forward-leaning EU policy when it comes to joint research and development.

Moreover, the strategy also tiptoes around the emerging geopolitical realities of the region. There is no clear response to China’s Belt and Road Initiative, little focus on shared areas of concern like the Indian Ocean or Red Sea, and little attention being paid to the budding GCC-Africa relations. While there may be good reasons to not directly broach these issues, the problem is that the strategy does little to locate a GCC-EU vector in these changing dynamics.

Finally, despite all the talk of GCC “actorness,” the strategy remains strongly EU-centric. By and large, GCC countries are offered a chance to join EU instruments, learn from EU best practice, and participate in EU programs. EU rules and regulations remain the measure of things, and the focus is on bringing the GCC into the EU’s regulatory orbit. While this does make sense from an EU perspective and dovetails with the EU’s self-image as a regulatory superpower, it does not reflect the current mood in the Gulf. On the contrary, there is a growing view in the Gulf of EU rules and regulations as discriminatory and constraining, and a reluctance to accept the EU’s leadership here.

This speaks to a bigger issue in EU-Gulf relations that also shines through in the EU proposal. Both sides continue to find it difficult to understand and navigate each other’s political and decision-making systems. In the Gulf, the EU’s highly institutionalized, bottom-up, and bureaucratic approach meets a more hierarchical and outcome-driven decision-making system that values speed and impact over checks-and-balances and patient progress. The resulting disconnect leads to misunderstandings and makes it difficult for the two sides to align.

It remains to be seen how far the EU’s proposed strategy will be amended in the EU’s inter-institutional process — already there are some calls for a greater focus on human rights. Regardless of the outcome of this process, the strategy delivers a positive impulse for EU-Gulf relations, and EU efforts to enhance its presence and become more politically engaged in the Gulf are a step in the right direction. However, the document is no more than that: a first step toward building a more strategic partnership. And as in the decades leading up to this step, the two sides will meet familiar challenges on the way.

Dr. Timo Behr is a non-resident fellow at the Finnish Institute of International Affairs and a Subject Matter Expert at the Hague Center for Strategic Studies. He is also the Co-Managing Director of MacroScope Strategies, a strategy and government affairs consultancy.

Saskia M. van Genugten is a non-resident senior fellow at MEI, a research fellow at the Netherlands Defence Academy, and an associate director at MacroScope Strategies. The opinions expressed in this piece are their own.