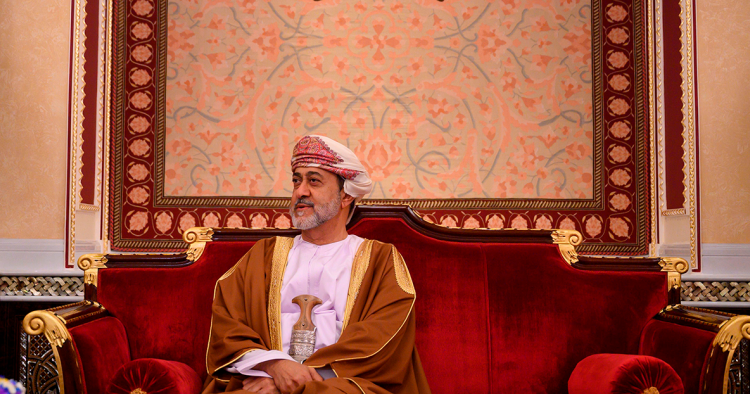 Sultan Haitham bin Tariq al-Said arrived in Neom, Saudi Arabia, on July 11, 2021, in his first foreign trip since becoming the sultan of Oman on Jan. 11, 2020. At the start of his two-day visit to the kingdom he was met by King Salman and accompanied by a high-level Omani delegation. A slew of new agreements were signed across commerce, culture, and transport. The visit coincided with the opening of the first ever direct land route between Ibri in Oman and al-Ahsa in Saudi Arabia spanning 800 km across the Empty Quarter, instead of a circuitous 1640-km route via the United Arab Emirates (UAE). The new road is significant for trade, tourism, and Omani-Saudi connectivity.

The timing of this visit is instructive. Within the past few days, the kingdom and the UAE have experienced tensions in bilateral relations after the OPEC summit concerning OPEC+ quotas post-2022, the kingdom's updated trade rules on imports from other Gulf Cooperation Council (GCC) states, and Saudi travel restrictions from the UAE due to COVID-19. In contrast, the arrival of Sultan Haitham highlights good neighborliness and that unity still exists in the GCC. Within the past two months, Oman has experienced large-scale protests about unemployment and corruption, a decade after similar protests broke out at the onset of the Arab Spring in 2011. Sultan Haitham will be hoping that the deals signed with the kingdom during his visit will help alleviate some of the economic challenges that Oman faces.

Saudi Arabia, along with the UAE, has invested heavily in Oman and has so far created more jobs than states such as China. Amid a combination of structural pressures, especially the economic imperatives of a country with a high breakeven price per barrel of oil and low proven reserves, which are only expected to last 25-30 years at 2019 production levels, Oman has been forced to rethink its economic policies. Government debt to GDP rose from 4.9% at the onset of the oil crash in 2014 to 60% in 2019 and 80% in 2020. Further economic fallout from COVID-19 is expected.

After Sultan Qaboos bin Said, Oman’s long-time ruler, passed away in January 2020, Sultan Haitham spoke about the need to "develop instruments of questioning and accountability." At the same time he announced the establishment of a social security system to provide a decent standard of living to citizens and a cushion against the negative impacts of economic reforms taking place. Oman also moved to establish new financing such as the bridging loan coordinated by First Abu Dhabi Bank and Bank Muscat. Like Saudi Arabia and the UAE, Oman has shaken up its ministries, such as the Ministry of Energy and Minerals, to better align with public policy challenges, and is willing to delegate to a younger generation in central and local government. It has also created new institutions such as the Oman Investment Authority and Energy Development Oman.

A bridging role in the Gulf

Closer Saudi-Omani ties will help to consolidate Saudi gains in al-Mahrah in Yemen, including post-war planning and security on the border with Oman. This dovetails well with U.S. interests in Oman, including an agreement signed in 2019 that governs U.S. access to Duqm and Salalah ports to promote "mutual security goals." Duqm is large enough to accommodate an aircraft carrier and is ideally placed to project force into the Arabian Sea. Thus, Saudi Arabia, Oman, and the U.S. will continue to strengthen their regional security measures and establish a stronger sphere of influence to combat terrorism and piracy.

Oman will continue to support diplomacy to bring the Yemen conflict to an end and facilitate contact between Saudi Arabia and Iran, leveraging a high level of trust built up with Iran over several decades. Sultan Haitham will seek to maintain Oman's independence established by Sultan Qaboos over the previous decades. For example, when Saudi Arabia, Bahrain, the UAE, and others were cutting diplomatic relations with Iran in 2016 after some Iranians stormed the Saudi embassy in Tehran following the execution of prominent Saudi Shi’a cleric Nimr al-Nimr, Muscat maintained diplomatic relations. It did, however, condemn the violence. Oman was the only state to maintain diplomatic relations with Syria after 2011 and has tried to contribute to peace negotiations in Syria, where Oman's then-Foreign Minister Yusuf bin Alawi bin Abdullah met with President Bashar al-Assad in 2015, 2019, and 2020. Other attempts at diplomacy were made in Muscat in 2015. Oman could continue to play a bridging role in U.S.-Iran diplomacy following the Biden administration's return to negotiations on the Joint Comprehensive Plan of Action.

Sultan Haitham will be looking to maximize inward investment while continuing to leverage Oman's geostrategic location to guarantee its security and punch above its weight in regional and international affairs. But, facing internal and external challenges simultaneously will diminish the economic and foreign policy options available to him and his government as he seeks to quicken the pace of diversification.

Dr. Robert Mason is a Fellow at the Sectarianism, Proxies and De-sectarianisation project at Lancaster University and a Non-Resident Fellow at the Arab Gulf States Institute in Washington. The opinions expressed in this piece are his own.

How involved was Iran in the Houthi attack on the UAE?