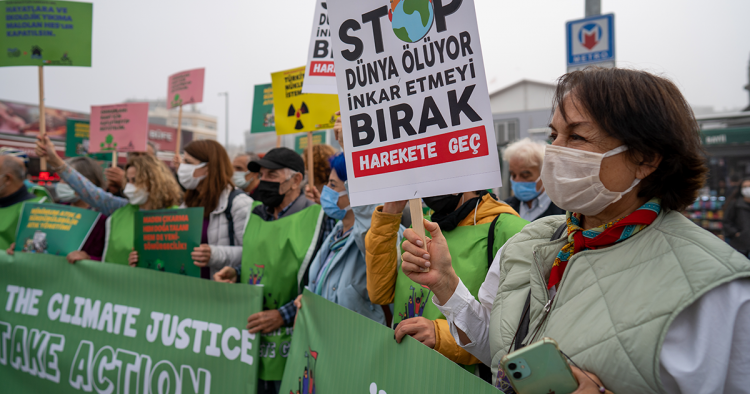 Since the founding of the United Nations Framework Convention on Climate Change (UNFCCC) at the Rio de Janeiro Earth Summit in 1992, climate justice has been a contentious issue that has divided developed and developing countries. The concept of climate justice is crucial for negotiating the diverse responsibilities of different nations and actors, and for shaping climate policies, and it has arguably come a long way since the early days of global climate change negotiations. However, given the scale and the urgency of the climate crisis, as well as the varying vulnerabilities of affected communities, there are still questions that remain unanswered. These include which countries are most responsible for climate change, what obligations these countries have to others that have borne the brunt of it, and how these obligations will materialize on the ground — or, in other words, what Roberts and Parks refer to as the “triple inequality” of responsibility, mitigation, and adaptation.

It is difficult to reach conclusive answers to these questions, but addressing them needs to be a top priority at the 2022 U.N. Climate Change Conference (27th Conference of the Parties, COP27) in Sharm el-Sheikh, Egypt in November. This will require tackling the inequalities affecting the central pillars of the U.N. climate regime head on, including mitigation, adaptation, and loss and damage (L&D).

Throughout history, fossil fuel extraction, industrialization, and greenhouse gas (GHG) emissions have been skewed toward a small number of relatively rich countries. These “high-income” countries, as identified by the World Bank, are responsible for 44% of cumulative CO2 emissions from fossil fuel extraction and manufacturing, land use, and forestry since pre-industrial times. Their share of the current global population, by contrast, is just 14%. A key demand of the climate justice movement is for developed countries to recognize their greater historical responsibility for global warming and to undertake more mitigation actions and make larger cuts to their carbon emissions than those countries with less historical responsibility for global warming, particularly given the fact that the former are more capable of investing in clean energy and infrastructure. The Paris Agreement stipulates that all signatory nations need to define national mitigation targets, known as Nationally Determined Contributions (NDCs), aimed at limiting GHG emissions and halting projected increases in global temperatures. However, this sidesteps the controversial issue of what constitutes a “fair share” of GHG reductions for each nation and does not include a mechanism to review the adequacy of the NDCs to meet the goals of the Paris Agreement. Instead, Paris Agreement signatories need to evaluate their collective efforts toward meeting their national mitigation targets and use that assessment to inform the preparation of future climate commitments. Countries from all regions of the world have submitted NDCs and have emission reduction targets. However, the latest U.N. Environment Program (UNEP) Emissions Gap Report shows that updated national climate pledges would reduce projected 2030 emissions by only 7.5% as compared with previous unconditional NDCs, whereas a 30% reduction is needed to limit warming to 2°C, and 55% is required to meet the Paris Agreement goal of limiting warming to 1.5°C. The report paints a grim picture, indicating that the latest NDCs and other mitigation policies, if continued throughout this century, would result in a temperature rise of 2.7°C, leading to catastrophic and irreversible changes in the Earth’s climate. If implemented effectively, net-zero emissions pledges could improve the situation, limiting the rise to 2.2°C. According to a study published in 2022, members of the G20, a group of the world’s largest economies that account for around 80% of global GHG emissions, are not on track to achieve their 2030 carbon emission reduction targets under current climate and energy policies. In fact, emissions from the G20 as a group are expected to increase by up to 0.6% per year between 2021 and 2030. This increase is misaligned with the global temperature goal of 1.5°C. If countries were truly to do their fair share when it comes to mitigation, while also recognizing the impact of historical emissions, rich countries should be doing much more. For instance, in the case of the U.S. this would mean a global mitigation effort in 2030 equivalent to a reduction of 195% below its 2005 levels, compared to a recently announced U.S. target of achieving a 50% reduction by that same date.

If mitigation seeks to prevent the environment from changing, adaptation seeks to help people live in a changed environment. Adaptation has primarily accelerated in high-income countries, whereas low-income ones have often lacked the resources to launch adaptive measures and initiatives. The UNEP estimates that adaptation costs will vary from $140 billion to $300 billion per year by 2030, and $280 billion to $500 billion per year by 2050. The current provision of $100 billion a year for both mitigation and adaptation by 2030 is clearly insufficient to address worsening climate change impacts in developing countries. Furthermore, rich countries failed to pay their fair share of the annual $100 billion climate finance commitment in 2020 and 2021. Of the 23 developed countries committed to providing international climate finance, only Germany, Norway, and Sweden have paid their fair share, while others have provided less than 20% of what they should. The U.S. in particular has fallen far short, providing less funding than France, Germany, Japan, or the U.K., even though its economy is larger than all of them combined. In addition, distribution varies greatly between mitigation and adaptation: Mitigation initiatives receive the largest share of climate financial support through bilateral channels, at 65%, while adaptation finance represents only 20-25% of climate finance flows. African countries, for example, are among the least climate resilient in the world, with high vulnerability to climate impacts and limited resources to embark on adaptation measures.

Although Africa’s historical responsibility for and current share of carbon emissions is less than 3% of the global total emissions, the continent’s climate adaptation finance needs are estimated to be at least $50 billion annually by 2050. However, according to the report on Financial Innovation for Climate Adaptation in Africa published by the Global Center on Adaptation (GCA), in 2019 and 2020 only $11.4 billion was committed to adaptation finance in Africa, with the overwhelming majority of funds (97%) coming from the public sector. This falls far short of the climate finance needs African countries declared in their NDCs, equal to one-quarter of the global total. In addition, according to the 2021 Global Landscape of Climate Finance report, most climate finance in 2020 (61%) was raised as debt or loans, of which only 12% was low-cost or concessional. Poor countries that usually have high public debt and are more vulnerable to climate impacts are required to pay back these loans for adapting to climate risks they have hardly contributed to creating. Debts for climate swaps, whereby developed countries provide debt relief for debtor countries in return for climate-related spending commitments, could be helpful in tackling worrying debt levels while accelerating climate adaptation efforts. In 2020, climate adaptation finance was primarily funded by public actors, with private climate finance accounting for less than 2%. A major barrier that prevents private sector participation is the perceived low market rates of return on climate adaptation projects, which generate unfavorable risk-return profiles that discourage investment. Therefore, it is very important to strengthen financial incentives for the private sector to invest in climate resilience projects by applying, for example, tax breaks, credit enhancement, and concessional loans. All these challenges must be at the top of the agenda at COP27, and developed countries must lay out concrete guidelines related to climate funds mobilization, sources, governance, and implementation.

L&D refers to the notion that vulnerable communities and poor regions face disproportionate impacts from climate change. These impacts take the form of tangible losses that can be repaired or restored, such as infrastructure, property, or historical sites, and intangibles ones, like the irrevocable loss of human lives, biodiversity, indigenous knowledge or culture, and degraded health. L&D measures differ from adaptation measures in the sense that they should be taken when adaptation measures are unsuccessful in addressing irreversible climate impacts. This is particularly true for unavoidable slow-onset impacts such as inundation from sea level or adaptation measures that are unfeasible to implement, sometimes due to socio-economic constraints, lack of institutions for capacity building within vulnerable communities, or shortage of international financing. In other words, L&D begins where the limits to adaptation end.

Developing countries have consistently demanded to be duly compensated by wealthy countries, which have emitted the bulk of GHG and bear the greatest responsibility for the climate crisis, as a precondition for climate justice. Calls for compensation are an extension of calls for reparations, and both are pertinent to the discourse on climate and ecological debt. The latter implies that the Global North owes the Global South for historical and continuous plunder, extraction, and the resulting climate warming that threatens vulnerable and inculpable peoples and their livelihoods. Mechanisms to address L&D have been a contentious issue in global climate change meetings for the last 25 years, and to date no significant political action or concrete financial commitments have been made.

A breakthrough that gave a sense of purpose to the long-floundering debates around L&D happened when the Paris Agreement acknowledged, in 2015, the importance of averting, minimizing, and addressing climate-induced L&D. However, the Paris Agreement shied away from developing a basis for liability or compensation. Building on the momentum led by less developed countries and the environmental justice movement, developed countries at COP26 in Glasgow agreed to engage in an L&D dialogue that further formalized discussions over compensation for damages from climate change. Nevertheless, developed countries refused to accept climate liability and to establish an L&D facility that could create clear-cut financial commitments to compensate for climate harm and streamline aid. This will be a critical item on the agenda at COP27, where countries will need to reach common ground on viable and feasible ways to establish and operationalize a funding mechanism for L&D. In addition, such compensation should not be reduced to solely acknowledging past environmental harm and associated social and economic inequalities, but should be part of a more radical transformation that helps reshape the economic system in a way that doesn’t reproduce these inequalities.

The structural inequalities in the current U.N. climate regime present distinct challenges when it comes to combatting global warming. This is particular true in the post-Paris era where powerful countries often make climate pledges in line with their own self-interest, ignoring the “polluter pays” principle and their historical responsibility for climate harms that still cast a long shadow in the present, especially over disadvantaged and marginalized groups. The principles shaping climate governance, including the pledge-and-review system, voluntary commitments, and market-based strategies, have sidestepped the concept of common but differentiated responsibilities and respective capabilities, which has been a fundamental requirement of the global climate justice movement. COP27 will thus be a critical moment for addressing the “triple inequality” of responsibility, mitigation, and adaptation in a way that produces clear-cut commitments and binding agreements with the ultimate goal of creating a U.N. climate regime that stands in solidarity with vulnerable communities around the world and tries to address climate injustices.

Zeina Moneer holds a PhD in environmental politics from Freiburg University in Germany and her research interests include environmental movements, environmental justice, environmental communication, international polices of climate change negotiations and adaption, and sustainability transition with a particular focus on the MENA region.