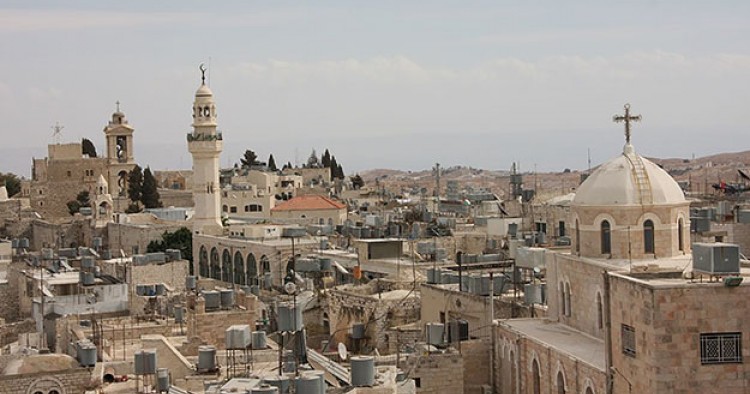 Leila Sansour is an acclaimed filmmaker, best known for “Jeremy Hardy versus the Israeli Army.” She returned to her hometown Bethlehem to document the detrimental effect of the wall on the city and its people. She discusses her latest film, Open Bethlehem.

The following interview was edited for style and clarity.

MEI: Tell me about the genesis of this film and project, and your inspiration for it?

Sansour: It began as a film project about the wall around Bethlehem. Several months into the filming, I felt ‘well, why am I filming this?’ I’m documenting the destruction caused by the wall, but that’s not good enough. This should be stopped. It’s such a glaring injustice, and I can’t see anyone doing anything to stop it on an international scale. While Palestinians can be dismissed as “terrorists,” how can you dismiss the trashing of the heritage of Bethlehem, the birthplace of Christ?

So I started the project, thinking I would stay in my old hometown for a year or two at most. But the situation kept getting worse and I literally could not walk away. I stayed on for five years.

MEI: You documented the effect of the wall on Bethlehem over a six-year period, with people’s homes and livelihoods being destroyed in the process. What was that like for you as a filmmaker and also as a Palestinian?

Sansour: Initially I felt quite powerless and then angry about the situation and lack of international outcry. But I realized I needed to be very careful, to not allow myself be consumed by emotion, but to channel my feelings into constructive work to help the situation. I remember sitting in the Church of the Nativity telling myself, “You have to be a machine for Palestine.” But it wasn’t easy.

MEI: Why do you suppose there is such a disconnect between Western perceptions of Bethlehem and the reality on the ground?

Sansour: This is a big question—why is it so? If you ask any Muslim where Mecca is, everyone knows. But if you ask where Bethlehem is, nobody knows it is in Palestine. How does that happen? It sheds light on the fact that Israel is treating us like a backyard. They want to do to us and with us what they wish to do. They get to tell the world our story. Our presence, identity, and heritage are hidden because it’s not suitable for the people in power.

MEI: In the film you travel to America and meet with the canon of the Anglican Church in Washington D.C. You already have the blessing of the archbishop of Canterbury and Desmond Tutu, but now that the film is coming to North America, do you think there will finally be a penetration of the dominant American narrative about Palestine? To what degree is that already happening?

Sansour: We work with many different groups— faith groups and universities. We’ve been invited to screen the film at Harvard, MIT, Princeton, Berkeley, and Georgetown.

We aren’t planning a big commercial release, but rather want to connect with grassroots audiences over the next year. We’re inviting everyone to become “citizens of Bethlehem” through our passport program. Bethlehem is part of our human heritage and we want to invite everyone to be stakeholders in helping the city to survive and thrive.

We want people to visit Bethlehem and see with their own eyes the result of the Israeli land grab. Of course, Bethlehem cannot survive without a larger peace and reconciliation process, one that is increasingly urgent.

MEI: What has the reaction been to the film from audiences in North America and Palestine?

Sansour: It was gratifying to receive a warm reception from people in Bethlehem. Many said they felt vindicated by the film.

It also screened at the Jewish Film Festival in San Francisco last year. It was very interesting as about half the audience liked it and half walked out.

The reaction to the film from Americans has mainly been one of shock at discovering the reality of the situation. Many people had never heard of the wall and wondered, “Why isn’t this more widely publicized?”

MEI: The phrase “the personal is political” is very apropos of your film. It’s as much a personal journey as a mission to save the birthplace of Christ and the larger Palestine. How did the two merge in your filmmaking process?

Sansour:  It went through many phases. I was born in Moscow and moved to Bethlehem when I was six. My father (Anton Sansour, a founder of the University of Bethlehem) kept telling me about his hometown with such love and longing that I imagined it must be a place like Disneyland.

As a teenager I found it small and provincial, but when I left for London I re-imagined Bethlehem in nostalgic sepia tones. I returned as an adult wanting to make a film with the same romanticized vision. But after five years it wasn’t romantic. It was a real and rough place–with problems both internal and external.

Somehow I made that journey from envisioning Bethlehem as a legendary place to accepting it as a real place. But by accepting that reality I found the magic again.

MEI: What does Bethlehem symbolize for you? A place of peace? What is the connection between peace and reconciliation in Bethlehem and larger regional realities?

Sansour:  Bethlehem’s message of peace and joy and goodwill to all is a powerful one. As the world struggles with respect for international law and protection of the weak, on some level it’s an aspirational message.. Since Jesus is a prophet venerated in Islam, it’s also a model for the Middle East in terms of Muslim and Christian peaceful coexistence—of communities that share cultural and spiritual space—and a place where differences are accepted.

Bethlehem has always been a place where tourists and pilgrims visited from around the world, a place where bridges and connections were made to different cultures. I find it shocking that Western countries that preach tolerance and understanding and democracy in the Middle East turn a blind eye to the destruction of Bethlehem, where tolerance has existed for centuries.

MEI: There are so many poignant images in your film, but in the end the message of your film is hope. Do you still feel hopeful?