Turkey Should Avoid Getting Involved in the Saudi-Iran Row 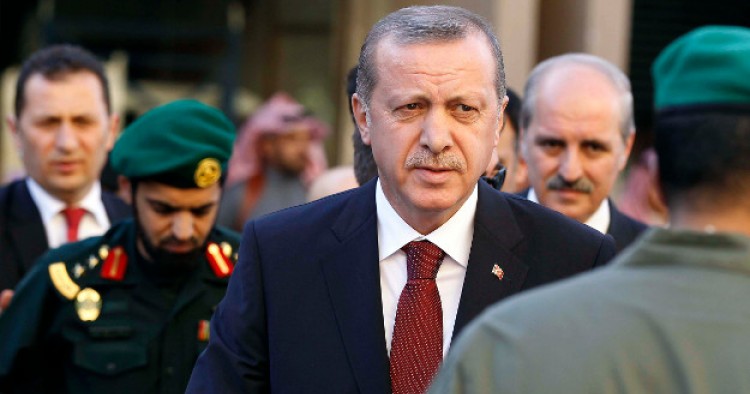 Turkey’s reaction to the latest spat between Saudi Arabia and Iran spells more trouble for Ankara at a time when it is already at loggerheads with many of its neighbors. Initial remarks by Deputy Prime Minister Numan Kurtulmus criticizing both sides were an attempt to keep Turkey out of the rift. He was upstaged, however, by Turkey’s foreign ministry, which followed up with a statement singling out Iran for condemnation.

President Recep Tayyip Erdogan went a step further, weighing in on the side of the Saudis and blasting Iran for its support of the Syrian regime. He said said those who remained silent over the deaths of the Syrian people were causing an uproar over the execution of one person in Saudi Arabia.[1]

The Saudi-Iranian row is taking place against the backdrop of closer Saudi-Turkish ties. The warming of ties began last year after the death of late King Abdullah, with Erdogan cutting short an African tour to offer his condolences in Riyadh and attempt to mend what was a frosty relationship with a major Sunni rival. Sharing a mutual frustration at the U.S.’s failure to adopt tougher policies in Syria and Iraq, and by Iran’s growing clout in these countries, Turkey and Saudi Arabia have pushed aside their rivalry for Sunni preeminence and built a close partnership in Syria and Iraq in a bid to counter-balance Iran.

To that end, Turkey recently announced that it would participate in the Saudi-led Islamic Military Alliance, a Sunni coalition launched by Saudi Arabia to check Iran’s power. During Erdogan’s recent trip to Riyadh, just days before the outbreak of the crisis between Iran and Saudi Arabia, the two countries agreed to set up a ““Strategic Cooperation Council.”

Turkey sees improved ties with the Saudis as a way to break the stalemate in its regional policy, which has suffered repeated setbacks and missteps since the Arab uprisings in 2011. Turkey has seen its regional influence wane due to aggressive policies in the Levant, Egypt, Israel/Palestine and Libya and its bias toward the Muslim Brotherhood. From Ankara’s view, a closer partnership with Saudi Arabia might hold the key to breaking its regional isolation and allowing to exercise influence over regional events.

However, the risks of joining the Saudi camp include having to sign up to Saudi regional endeavors and assume positions that might not be in the best interests of Turkey. The current Saudi-Iran spat is a case in point, with Turkey abandoning its pragmatic position to take a blatantly pro-Saudi stance, potentially further damaging its own relations with Tehran. It also reinforces Turkey’s image as a Sunni power pursuing a sectarian policy and exacerbates the very problems Turkey is trying to fix in its immediate neighborhood.

One vital arena where Saudi’s increased tensions with Iran adversely impact Turkish interests is in Iraq. Turkey has long argued that Iraq’s troubles have stemmed from the sectarian policies of the Shi’a-led government in Baghdad and has urged an inclusive government to include disillusioned Sunnis. Iraqi Prime Minister Haider al-Abadi has been making strides to do just that, and the current capture of Ramadi will prove the litmus test for a new era of Shi’a-Sunni cooperation in Iraq.

But further Saudi-Iran hostility could thwart Abadi’s efforts, and thus undermine Turkish interests to see an inclusive government emerge in Baghdad that includes Iraqi Sunnis. The execution of the Saudi Shi’a cleric Nimr al-Nimr sparked outrage in Iraq, where some Shi’a leaders called for the closure of Riyadh's newly reopened embassy in Baghdad and revenge executions of all Saudi prisoners held in Iraq. Additionally, two Sunni mosques in mostly Shi’a Hilla province were bombed over the weekend. Anti-Sunni anger among Iraqi Shi’as makes Abadi’s job to build bridges that much difficult.

Fuelling sectarian flames could also empower ISIS, which has launched several attacks in the last few months inside Turkey and another one against Turkish troops based in the Bashiqa military base near Mosul last week.[2] ISIS poses a direct national security threat to Turkey, which is hosting more than 2 million Syrian refugees and well-established Salafi networks within its borders.

The rising Saudi-Iran tension will also impact the tenuous Syria peace process. Despite all the hurdles the inclusion of the Saudis and Iranians at the negotiating table has been one of the few causes for optimism. But with Iran and Saudi Arabia at each other’s throats, the fragile peace process seems even less likely, and thus maintains a level of insecurity on Turkey’s southern border. Turkey is also a major importer of Iranian natural gas, which has become of greater importance given the deterioration of ties between Ankara and Moscow. Turkey and Iran have so far managed to compartmentalize their relations by not allowing their differences on the regional matters to cause long-lasting damage to their bilateral, particularly economic, relations. But the most recent tension makes it increasingly difficult to maintain that policy and Turkey stands to lose more from any fallout than Iran. It is an energy dependent country and with hostilities soaring between Russia and Turkey, Turkey’s options for energy partners are diminishing.

The region is already engulfed in sectarian violence. Turkey should avoid throwing fuel to the fire, which do not serve its interests, but rather use its existing relations with both Saudi Arabia and Iran to ease tensions, for the benefit of Turkey and the wider region.