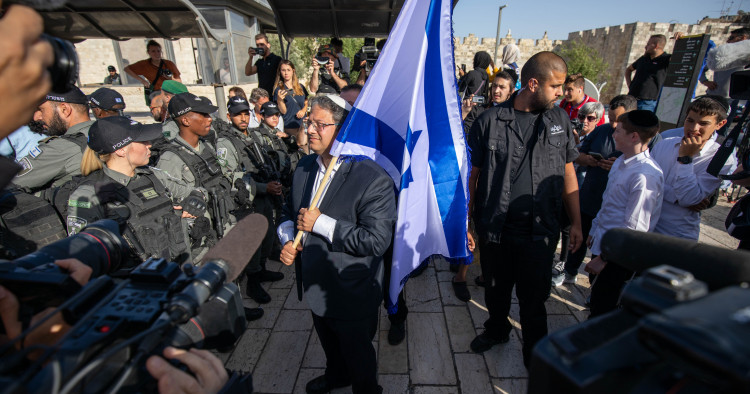 The Israeli elections held on Nov. 1, 2022, were the fifth in three years, and the results reflected the rise of a solid right-wing majority in Israel. This makeup of Israel’s voting public is not particularly novel — it was repeatedly apparent after almost every one of the recent elections. But this time, the electorate revealed itself to be more unified than ever in its backing of right-wing ideologies and more supportive of Jewish Zionism over democratic pluralism. Palestinian voters, on the other hand, voiced disappointment with the Israeli political system, which explains their low turnout during the election — 53%, though actually an uptick of almost 10% compared to last year.

Following its win at the polls, Benjamin Netanyahu’s coalition will have at least 64 members of parliament who consist primarily of religious, very conservative, right-wing males, with few women. Netanyahu leads a bloc that is ideologically homogeneous in ways never before seen, with a majority of religious nationalists and ultra-Orthodox (Haredi) parties set to enter government and likely to work cohesively for the next four years, unlike in the past. Together with the Haredi parties, this coalition will be held together by a type of theocratic Jewish supremacy, which will manifest on the ground primarily as intensified repression of Palestinians and other non-Jewish minorities. They will push forward a nationalist right-wing agenda the likes of which Israel has not seen in many years.

In addition to helping Netanyahu remain in power by removing the case against him on charges of fraud and breach of public trust, the coalition members’ shared objectives include limiting the High Court of Justice’s ability to strike down unconstitutional laws and giving politicians control over the appointment of judges. At the moment, nothing is more important for Netanyahu than keeping himself out of jail. He and his prospective allies have also repeatedly called for annexing the West Bank.

In the aftermath of this month’s election, international attention should be focused on the most recent addition to Israel’s political landscape. The true winners at the ballot box were not the Likud party or its head, Netanyahu, Israel’s longest-serving prime minister; rather they were his presumed coalition partners, the leading members of Israel’s Religious Zionism alliance, Bezalel Smotrich and Itamar Ben-Gvir, who has openly called for armed violence against Palestinians. According to Ben-Gvir, Israeli Palestinians ought to be subjected to “loyalty tests” and any found to be “disloyal” to Israel should be exiled from their ancestral homeland. Together, the Religious Zionism alliance attracted unprecedented support from voters and now forms the third-largest faction in the Knesset, with 14 seats.

Ben Gvir is the political and spiritual progeny of Meir Kahane, an American-born, ultra-nationalist, and racist Orthodox rabbi who was convicted of domestic terrorism in the United States before immigrating to Israel. Ben-Gvir, in particular, was a member of Kahane’s Kach Party, which called for driving Palestinians from Israel — citizens and noncitizens alike — and he has idolized the perpetrator of the 1994 massacre of 29 Palestinians at a Hebron mosque. In 2007, an Israeli court convicted Ben-Gvir of incitement and support for terrorist organizations, and even the military deemed him too radical to enlist. Ben-Gvir and Smotrich are considered radical even by the standards of Israel’s right wing. Both men are known to regularly harass Palestinians on the street in occupied East Jerusalem, including hurling profanity at residents, as well as to lead settler marches and cause friction, frequently resulting in the arrests and injuries of Palestinians, especially in the neighborhood of Sheikh Jarrah, which has become a hub for Jewish illegal settlement. In addition, they have demanded that the rules of engagement be loosened to make it easier for Israeli forces to shoot Palestinians. During his campaign visits to the Negev region and Israeli cities around the country over the past few months, Ben-Gvir repeatedly pledged to relocate Bedouins and Palestinian Israeli citizens to neighboring Arab states.

In today’s Israel, about two-thirds of Jewish Israelis between the ages of 18 and 34 identify as right wing. Simultaneously, Ben-Gvir and Smotrich’s views reflecting Jewish supremacy have become more part of the Israeli mainstream: though progressively woven into Israeli politics for many years, they are now out in the open. Among the most notable policy ideas advocated by Ben-Gvir and his Otzma Yehudit ("Jewish Power") party, either in the party’s manifesto or orally, is encouraging Palestinian residents of Israel to leave. According to public polling, his rhetoric of “either them or us” resonates with the political ideology of more than 48% of Israelis who feel that Palestinian citizens of Israel should be expelled because they pose a demographic threat to the Jewish State’s preservation.

Yet the extreme nationalism emerging from such religious Zionist factions and ideologies poses a threat to Israel as well. The inclusion of far-right Jewish supremacists in Israel’s governing coalition is likely to fuel the ongoing narrative shift inside the United States that will make continued U.S. defense of Israel increasingly controversial. Notably, U.S. Senator Robert Menendez, the chairperson of the Senate Foreign Relations Committee, recently warned then-opposition leader Netanyahu that including extreme-right lawmakers in a potential future government would harm U.S.-Israel relations. The Jewish-American pro-Israel advocacy group J Street called for reassessing the U.S. position of unconditional support for any Israeli government: “Under the looming ultra-right Israeli government that may take shape, that business-as-usual approach will be strained to untenable limits.”

The current situation stems in part from the U.S.’s long-time failure to pay attention and hold Israel accountable when it comes to the latter’s pledges and responsibilities related to protecting civil rights, pacifying inter-ethnic tensions, preventing the growth of Jewish settlements in the West Bank, and avoiding further territorial expansion into Palestinian areas, such as the moves to annex East Jerusalem or the West Bank. Israel’s supporters in the U.S. will need to watch these and other contentious Israeli government policies particularly closely now. Indeed, the outcome of the Nov. 1 elections will likely have an effect on a variety of issues but none more so than the volatile and violent situation in the occupied Palestinian territories, especially East Jerusalem, where Ben-Gvir constantly contests the status quo at the Haram al-Sharif or Temple Mount and campaigns for the expansion of Jewish rights and the assertion of Israeli sovereignty over the site. He has also frequently visited and lobbied for the Jewish settlers in Sheikh Jarrah, even constructing a tent in this East Jerusalem neighborhood and designating it as his temporary office. A month ago, he pulled a gun on local Palestinian residents and asked the police to shoot at the protestors. His forceful presence exacerbated tensions there, contributing significantly to the eruption, in May 2021, of violence in Jerusalem as well as many other Jewish-Palestinian cities inside the Green Line (Israel’s de facto 1949 border), in particular Lod and Ramla.

As this extreme Zionist government takes shape and begins to implement its stated policy goals, we can expect not just an increase in friction, house demolitions, and land confiscation but also police violence against Palestinian citizens of Israel. This looks inevitable considering the inclusion in the government of Jewish ultra-nationalist forces that label Palestinian citizens of Israel as “terrorists” and “disloyal” and threaten to deport them from their ancestral homes.

At the same time, however, the country may need to brace for the possibility of intra-Jewish Israeli violence, given the large number of illegal weapons inside the Green Line and the clash of ideologies among Israeli citizens when it comes to the preferred nature of their state. As the recent elections have demonstrated, today’s Israel embodies a Jewish state that still claims to be democratic even as it embraces racist and discriminatory laws against its own Palestinian citizens. Such an ethnocratic state will inevitably limit the rights of all its citizens — Palestinian and Jewish alike. Not all will accept this quietly.

Carol Daniel Kasbari, Ph.D, is a social scientist with an interdisciplinary doctoral degree in conflict analysis and resolution with 20+ years of experience designing and leading programs in the field of conflict mitigation, peacebuilding, advocacy, and nonviolent resistance in very complex international environments focusing on the MENA region and Europe. She is a Non-Resident Scholar with MEI's Program on Palestine and Palestinian-Israeli Affairs.