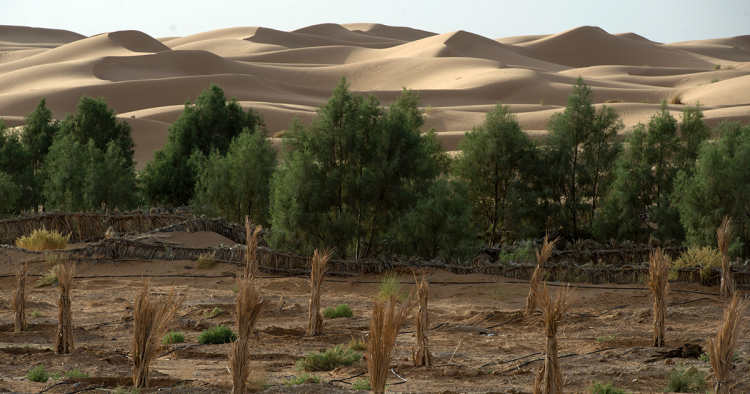 In April, the Euro-Mediterranean Center on Climate Change released a new study forecasting the emergence of heat waves with temperatures of 132° Fahrenheit (56° Celsius) or higher in the Middle East if climate change remains unaddressed. According to the report, rising temperatures of this magnitude could pose a life-threatening risk for the Middle East and its people, potentially causing disastrous drought and social disruption throughout the region.

As one of the hottest and driest spots globally, the Middle East region faces some of the worst impacts of climate change. Many of these events have not only been socially and politically devastating but have also resulted in huge financial losses for countries already experiencing economic insecurity. Countries in the Middle East and North Africa (MENA) have found themselves increasingly exposed to extreme weather events and natural disasters, which have affected more than 40 million people and cost more than $20 billion over the past 30 years, according to the World Bank. During the last five years alone, 120 disasters were recorded in the region, resulting in an average of $1 billion annually in damages and losses.

In addition, observers estimate that 60% of the region’s population already live in areas under severe water stress, raising the potential threat of devastating future financial losses as a result of natural disasters and income loss. The predominantly rainfed agricultural sector, to which 83% of total water use is dedicated, is the industry most impacted by irregular desertification patterns and, as such, is in great need of a variety of sustainable adaptation measures. Perhaps more urgently, the historical trend of migration from agrarian to urban areas has been exacerbated by global warming, which could pose a threat to social cohesion and political stability in the Middle East, with entire livelihoods, geographical regions, and local economies at risk of collapse.

Climate change is likely to put additional pressure on MENA governments to deliver social services and respond to new emergency relief needs. In other words, governments and stakeholders in the Middle East are obligated to build social and financial resilience in the face of climate change as quickly as possible and by multiple means, as a matter of economic and humanitarian survival.

Insurance: One tool in the toolbox of climate risk management

Climate risk management identifies and reduces the various climate-related risks to protect businesses and vulnerable populations efficiently. Nevertheless, such measures can be costly and remain out of reach for many. Indeed, most of the region’s lower-income countries, plagued by poor governance and with economies heavily reliant on farming and agriculture, will likely lack the adequate resources to address climate change through adaptation. Therefore, reducing climate change adaptation costs should be the first step in building climate resilience in the Middle East.

As one component of climate risk management, climate risk insurance consists of transferring risk from an insured person, collective, or object to insurance companies. The insurers, in turn, are part of larger insurance pools called reinsurance schemes, which encompass broader levels of risk diversification to compensate for residual risks that can never be completely avoided. Most of these climate risk insurance policies are index-based, with payouts directly triggered if certain meteorological indicators are reached. Early warning systems may involve a diverse set of indicators of potential food crises, including rainfall measurements, temperature data for determining soil dryness, or even the direct monitoring of plant growth.

Climate risk insurance could help promote resilience and climate adaptation in the MENA region in many ways. First, adequate insurance mechanisms, by providing quick financial compensation in the aftermath of large-scale disasters, could enable those affected to recover faster, making societies and economies more resilient in the near and long term. Second, insurance companies could play a prominent role in assessing and communicating climate-related risk through premiums, so that those subjected to risk could form a better understanding of the threat. Insurance companies also often play a leading role in developing indexes and measuring tools for assessing climate change’s financial and physical impacts in a country. MENA governments in particular could benefit from partnerships with private insurance companies, whose expertise and technical capabilities enable them to support the creation of individualized risk indexes. Governments could then become better informed about impending risks related to climate.

In addition, climate risk insurance will likely increase awareness and provide incentives to implement other adaptive measures. For example, insurance stakeholders could generate incentives for governments to promote knowledge-based climate risk management, and for businesses and private actors by granting lower premiums to those taking small-scale adaptive measures.

Asia as a model for climate insurance

While the MENA region has had very limited adoption of climate insurance, the Asia-Pacific region, whose rapid demographic rise and urbanization process have made the development of climate risk insurance instruments a necessity, has expanded quickly into this emerging sector.

In Sri Lanka, for example, the SANASA Insurance Company has offered index-based weather insurance to more than 50,000 tea and paddy farmers since 2011. In Bangladesh, the Flood Index Insurance Program, launched by Oxfam in 2012, relies on a model assessing flood levels for calculating premiums and has reached 1,660 poor and vulnerable households. The Agriculture Insurance Company of India also introduced the National Agriculture Insurance Scheme, an index-based insurance to cover crop losses, subsidized between 30 and 75% by the government.

Nevertheless, as the Middle East becomes increasingly vulnerable to climate change, the region could benefit from implementing similar policies to support climate risk insurance and rely on Asia’s experience in this area.

In 2016, Morocco, exposed to numerous floods over the years, took the lead in promoting innovative climate risk insurance by putting in place a “multi-risk climate” insurance program for cereal and spring crops. In the flood-prone rural Moroccan region of Souss-Massa, for example, an insurance scheme coordinated by the Munich Climate Insurance Initiative also intends to protect those whose livelihoods depend on agriculture, encompassing the entire value chain to build resilience. Morocco, together with Barbados, China, and Ghana, also launched the Advancing Climate Risk Insurance Plus initiative, in partnership with local authorities and private sector partners, in order to foster integrated and inclusive insurance solutions linked to all phases of the disaster risk management cycle, from design to implementation.

Recently, the Gulf region, which anticipates the highest temperature rise and sea level upsurge in MENA, has also increased efforts to establish climate risk insurance instruments. Last September, the UAE held a workshop to discuss the role of the insurance sector in helping achieve the Sustainable Development Goals (SDGs).

As of today, the region faces several challenges in implementing climate insurance solutions. First, the lack of investment in climate-resilient infrastructure and protective equipment makes weather-related risks too costly to insure, hampering the overall development of climate insurance. This investment gap partly stems from the general absence of political will to adapt to climate shocks, which often competes with short-term priorities.

A 2016 survey revealed that the bottom three wealth quintiles in the MENA region are more exposed to weather shocks than the top two, especially in terms of income losses. As the Middle East’s poor bear the brunt of climate-induced weather shocks, it is more necessary than ever to promote inclusive climate risk insurance products. The question of affordability of risk-based premiums remains the main challenge.

Social, cultural, and capacity issues coalesce to further dampen the development of cost-effective and innovative insurance schemes. Such issues include the generalized lack of awareness about insurance products among vulnerable populations, the absence of coordination between stakeholders, salient social taboos around insurance, and the deficit in assessment capacity to measure climate change data.

Another potential solution could be subsidies for financial insurance schemes by MENA governments, incentivized to reduce the cost of climate change adaptation and mitigate the rural migration crisis. Regional risk insurance pools with the same model as Asia’s SEADRIF could also protect the most vulnerable populations in case of a disaster.

Finally, and significantly, mobilizing collaboration among public and private stakeholders could foster synergies between diverse climate adaptation strategies to develop efficient indicators and insurance products. Boosting local communities’ insurance literacy is key to building bridges between communities, governments, insurers, and investors for framing inclusive and innovative risk financing solutions, in touch with the realities of the region’s vulnerable populations.

Chloé Bernadaux is an international security specialist. Her research interests lie at the intersection of social movements, political economy, and foreign policy analysis in the Middle East. The views expressed in this piece are her own.