How can Egypt capitalize on its start-up boom? 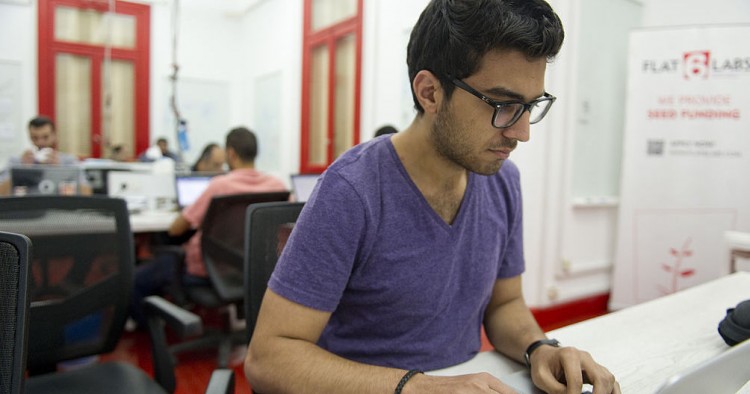 There has been a largely overlooked yet significant trend in entrepreneurship in Egypt, the Arab world’s most populous country. Much of this has been concentrated in the country’s two main economic centers, Cairo and Alexandria, but there are also signs of a broader and more inclusive trend. Despite this boom, few start-ups seem to have left much of a mark beyond the early development stages. A lack of access to finance has long been recognized as a key obstacle, yet the approaches taken by the government and international development lenders have proven largely ineffective. If this, along with other obstacles, can be addressed, the country’s nascent start-up scene could become a catalyst for economic development.

Following years of political turbulence that threw the Egyptian economy into disarray, there has been a noticeable pick-up in entrepreneurship over the past few years, with the Global Entrepreneurship Monitor 2018/2019 report finding “a significant growth in individuals who are pursuing new businesses.” This positive trend has been underpinned by the proliferation of infrastructure supporting innovative start-ups across Egypt and the emergence of what many call an “innovation ecosystem.” A 2019 Euro-Mediterranean Network for Economic Studies (EMNES) survey of more than 150 start-ups conducted by researchers at Cairo University offers valuable insights into the nature and composition of this ecosystem. One finding is that more than 40 percent of the survey respondents created their start-up in the wake of the 2017 investment law, which fundamentally reformed the country’s legal framework regulating local and foreign investment. The survey also highlights a considerable geographical concentration of innovative start-ups, with some 70 percent located in Cairo, the country’s political and economic capital, and 10 percent in Alexandria, Egypt’s second city.

For Cairo, the survey offers greater granularity on the spatial distribution of start-ups, showing a strong clustering at hubs, notably downtown at the American University in Cairo’s Greek Campus. The Greek Campus is a modern and tech-friendly work space with a data center, incubator, and auditorium. The ecosystem surrounding it is by far the most successful in Egypt. Another pillar of this new ecosystem is Flat6Labs, a start-up accelerator, which provides early seed funding, office space, and IT infrastructure, as well as human resources, accounting, and legal services. Meanwhile, in Alexandria, much of the start-up scene has been centered on IceAlex (short for Innovation, Collaboration, and Entrepreneurship), a platform for sector-specific incubators serving around 60 start-ups per year, according to its managing director, Ahmed Bastawi. Outside Cairo and Alexandria, smaller cities such as Ismailia, Zagazig, and Sohag have also seen the emergence of ecosystems — albeit on a much smaller scale — around local universities and workspaces, such as Fab Lab offshoots.

The vast majority of the respondents to the EMNES start-up survey said they launched without using outside capital. Only 17 percent of respondents said they had used a non-government grant and 6 percent said they had received government funding. A negligible 3.2 percent of businesses started out with a business loan. The lack of financing for small and medium-sized enterprises (SMEs) is not news per se, yet the scale of the problem is astonishing, considering for how long this issue has been at the very center of attention in the development and policymaking communities in Egypt and elsewhere. There has also been no shortage of flagship reports and concrete action over the years — especially in the aftermath of the Arab Spring, when the quest to broaden access to finance went into overdrive: Several development lenders such as the European Bank for Reconstruction and Development (EBRD) and the European Investment Bank started pumping funds earmarked for SME lending into the Egyptian banking system. Between 2011 and 2019, we calculated that the major bilateral and multilateral development banks extended credit lines totaling around $4 billion to Egyptian banks for on-lending to SMEs. Simultaneously, the Egyptian government has been tirelessly beating the drum for better financial inclusion of SMEs. In 2016, Egyptian President Abdel Fattah el-Sisi announced with much fanfare the launch of a 200-billion-Egyptian-pound ($25 billion) loan program to support SMEs, with the Central Bank following this with a new requirement that banks allocate 20 percent of their loan portfolio to SME lending.

Flawed remedial action from the government and development community

In light of all these measures, how is it possible that their impact remains so limited, as both the aforementioned survey figures and our research findings suggest? As part of our research, we reviewed the major multilateral and bilateral development lenders’ evaluations of their “intermediated” lending programs, which constitute the bulk of their SME financing. Since in most instances development lenders are merely extending credit lines to local banks along with some technical advice, they tend to have very little oversight of the beneficiary banks’ ultimate lending decisions. As a consequence, the development lenders’ internal and commissioned external evaluations mostly found that lenders have been largely unable to ensure an adequate targeting of their funds. In other words, commercial banks have not necessarily been compelled to lend to the small subset of innovative enterprises that have the greatest impact on job creation and economic development. There is a similar issue when it comes to government initiatives, with their deliberately broad definitions of SMEs that typically include more than 90 percent of Egyptian companies.

In addition to development lenders and government agencies’ apparent inability to ensure the effective use of funds for SMEs by private sector lenders, our research also raises questions about the choice of partner banks, which is limited to large, often foreign-owned banks. This largely disregards the historical development experience of other countries, where small local private banks, government-owned banks, cooperative banks, or state-owned development banks have frequently provided the bulk of the SME financing. Why would size and type matter? The conventional view is that smaller, more locally embedded banks engage in so-called relationship lending, with an interest in building long-lasting banking relationships with companies they are serving in their immediate community. This allows them to rely much more strongly on social rather than physical collateral. With respect to financing innovative start-ups more specifically, research shows that it’s state-backed lenders, along with public investment agencies, that tend to have the vision, risk appetite, and patience to finance start-ups. As a 2017 article published in the Oxford Review of Economic Policy put it, “While it is a common perception that it is private venture capital that funds start-ups, evidence shows that most high-growth innovative companies receive their early-stage high-risk finance from public sources.”

All of this suggests that a fundamental reorientation of lending strategies is needed in Egypt to better support the current start-up boom — though few alternative, more effective financing channels are readily available. Egypt has no cooperative banks and Mit Ghamr, the country’s only locally-owned savings bank, which served the people around the Delta town of Mit Ghamr, was forced to shut down within a few years under President Gamal Abdel Nasser in 1967. There are several government-owned development banks in Egypt, but they have been largely shunned by international financial institutions. Foreign development lenders that did engage with them in the past reported unsatisfactory outcomes due to a variety of factors, such as excessive government intervention and poor institutional development. Moreover, lenders like the EBRD and IFC have private sector-centric mandates.

Nevertheless it seems unwise to ignore the lessons of prior development experience. A cooperation project between Rabobank, a confederation of Belgian credit unions, and the Egyptian Principal Bank for Development and Agricultural Credit suggests that existing development banks in Egypt could potentially be reformed. Rabobank provided strategic advice and assistance with product and services development, which a World Bank report initially qualified as “promising” back in 2011, although further down the line the project appears to have lacked the necessary scope and longevity to achieve a full turnaround. A look further afield at institutions elsewhere in the region, such as the Saudi Industrial Development Fund or the Moroccan postal bank, offers more inspirational examples of state institutions that can be highly effective in financing small enterprises if they have sound governance structures.