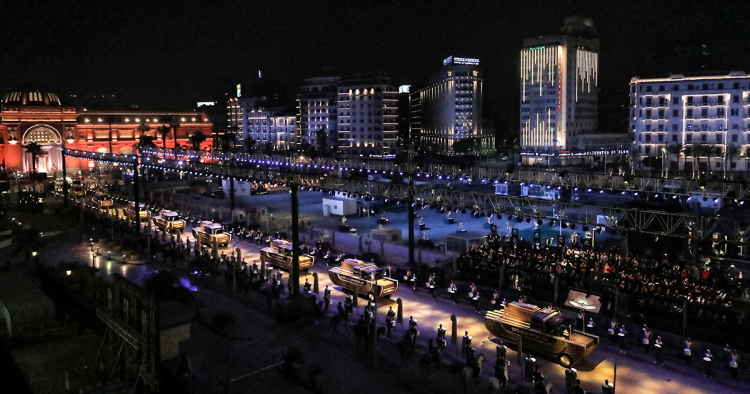 After decades of soul searching to define itself as a state, Egypt is building its own civilization-state and seeks to join an emerging club of nations that center historical and cultural tradition in their policy and governance structures and reject the West’s cultural dominance. The civilization-state is the prism through which Western capitals should view and understand Egypt’s domestic and foreign policy moves.

Last April, Egypt held a unique event, "the Pharaohs' Golden Parade," during which the government moved 22 mummies of kings and queens of Ancient Egypt's New Kingdom from the Egyptian Museum to the recently established National Museum of Egyptian Civilization. The Pharaohs' Golden Parade had a cultural and touristic objective, but it also represents and symbolizes Cairo's new ideological discourse and aims to build a civilization state with its distinct cultural, historical, and political narrative. By doing so, Cairo aspires to join the league of other civilization states — including China, Russia, and India — that believe their systems represent civilizations and ought to preserve faith, tradition, and heritage, which, in their view, inherently clashes with Western post-national-and-religious multicultural liberal democracies and the dominant liberal world order.

The changing identity of a new republic

President Gamal Abdel Nasser championed secular Arab nationalism “Pan-Arabism,” while President Anwar Sadat embraced an “Egypt first” discourse. However, under Hosni Mubarak, Egypt stagnated ideologically for more than three decades. The 2011 Tahrir Revolution represented a unique moment in Egypt’s ideological discourse with the rise of many political narratives that have competed to define Egypt — mainly, the Muslim Brotherhood and the Nationalists. Since 2013, Egypt has been on a journey to define the country’s emerging post-Mubarak/post-Revolution political structure. The new rulers of Egypt inherited a society consumed by political upheaval and social strife, and facing a growing Islamic insurgency in Sinai and the mainland. Since 2013, the government in Cairo has been an archenemy of political Islam, both in Egypt and around the region, and has been an outspoken critic of the religious establishment for its refusal to modernize Islam and reclaim the faith from terrorist organizations. In addition to rejecting the Islamist movements, the government of President Abdel-Fattah el-Sisi didn’t adopt the Nasserist narrative either. Sisi spent his first term in office searching for a model that fits his vision for a new Egypt and the republic he is committed to build. Unsurprisingly, Egypt’s pharaonic heritage re-emerged as the foundation for Sisi’s Egypt.

The colonialist definition of Egypt

France’s invasion of Egypt (1798-1801) and Great Britain’s occupation of Egypt (1882-1956) gave Paris and London a colonialist monopoly over Egyptology and physical control of Egyptian heritage itself. In the Western colonial perception, the ancient “pharaonic” Egyptian civilization was part of Europe’s heritage because of “envisioned” racial and cultural links to Rome and Greece. This resulted in a deliberate colonialist conquest to prove the European nature of ancient Egypt, intentionally separating it from the Coptic and Islamic civilizations that followed. This ultimately created a discontinuity in Egyptian cultural identity, making ancient Egypt seem like a strange civilization to contemporary Egyptians, who primarily relate to the Islamic and Coptic civilizations.

Simply put, Egyptology was by Europeans for Europeans without any inclusion of Egyptians in the study and examination of their own heritage until the 1919 Revolution against British colonialism.

Following the 1919 Revolution, the newly formed Egyptian national movement sought to Egyptianize Egyptian heritage from British and European colonialism. The democratically elected al-Wafd Party government — led by Saad Zaghlul, the leader of the 1919 Revolution — fought British colonialism over the ownership of the Tomb of King Tutankhamun. Zaghlul’s government succeeded in retaining King Tutankhamun’s treasures in the Egyptian Museum — a fight that centered the role of ancient Egyptian heritage in shaping Egyptian nationalism.

The case for an Egyptian civilization-state

Fast forward to 2021, Egypt is a nation of 100 million that has been struggling to emerge from the political upheaval, social strife, and Islamic insurgency in Northern Sinai that has dominated the Post-Tahrir Revolution period. Nowadays Egypt is characterized by its public disagreements with the local religious establishment, its fight with political Islam, and its discomfort with Arabism. The latter two coincided with Egypt’s turbulent relations and open dissent — following the Tahrir Revolution — with the West and its value system that centers individual rights. Eventually, Cairo started to look into a new model that encapsulates a vision for the new Egyptian republic.

The envisioned new republic prioritized presenting contemporary Egypt as a continuation of Egypt's various ancient civilizations. Unsurprisingly, in the Pharaohs' Golden Parade, the 22 royal mummies were sent to the Museum of Egyptian Civilization, alongside artifacts that belong to different eras of Egypt: Pharaonic, Ptolemaic, Coptic, and Islamic. In addition, the mummies' parade included an ancient Egyptian song extracted from "Hymns to Isis," with an eye-catching dance performance. The parade closed with President Sisi welcoming and paying respect to the 22 royal mummies — a symbol of a seamless transition between the past and present where Egypt's glorious kings and queens pass the baton to its current president, Sisi. Many Egyptians — mainly the middle class in big metropolitan cities — perceived the Pharaohs' Golden Parade as a serious and positive state-led attempt to reconceptualize Egyptian identity and embrace the pharaonic heritage as a cornerstone of it. It was a rare moment of rallying around the flag.

While the Pharaohs' Golden Parade is the most symbolic visual representation of Egypt’s envisioned civilization-state yet, there is a broader systematic effort to embrace pharaonic symbols in the new cities currently under construction — from the ankh-shaped presidential palace to the new people’s square, and from the new octagonal headquarters of the Ministry of Defense to the new presidential palace on the North Coast. Beyond the inclusion of pharaonic symbols and the success of the Pharaohs' Golden Parade, the Ministry of Education has announced the teaching of hieroglyphics in schools, which indicates how serious the government is about wanting to integrate pharaonic identity into the educational system.

Egyptian officials don't shy away from their discontent with the liberal international order in their encounters with their Western counterparts. Notably, in a joint press conference with President Emmanuel Macron in 2020, President Sisi rebutted Macron’s definition of Western liberalism and made it clear that his republic believes that religious values inspired by god — in reference to the three Abrahamic religions — are holier and supersede the Western-originated-and-dominated man-made values.

Egypt, civilization-states, and the rise of the rest

By creating a civilizational continuation between ancient Egypt and the modern state of Egypt with its Muslim characteristics, the Egyptian government aims to build a distinct civilization-state that stands in contrast to the Western-dominated Westphalian nation-state and its liberal values. Ultimately, Egypt would join the league of China, Russia, and India — prominent civilization-states that center their historical and cultural tradition in their policy and governance structures and reject the West’s “cultural dominance,” which favors individuals over societal traditions, and its proclaimed universal appeal and validity.

To understand today’s Egypt is to acknowledge that Cairo is building its own civilization-state. And if global politics are nearing an era of multipolarity and the rise of the rest, then Egypt's case is not unique, and civilization-states may in fact represent the new norm.

The Schism of Jihadism in the Sahel: How Al-Qaeda and the Islamic State are Battling for Legitimacy in the Sahelian Context

The lessons of history: The PJD and the history of partisan politics in Morocco