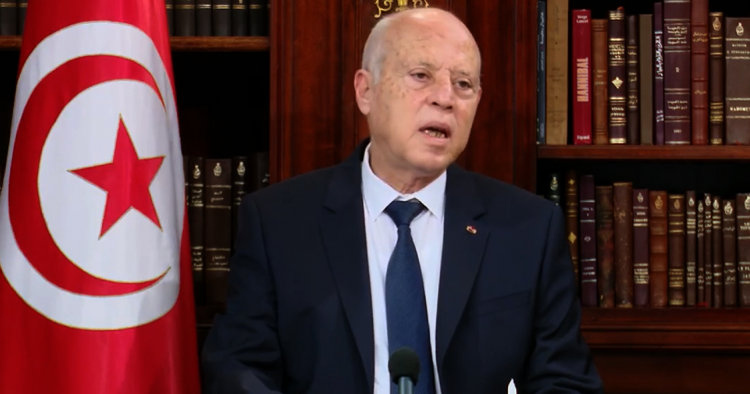 President Kais Saied’s July 25 decisions to suspend parliament and the government appear to have been largely popular, despite sharp criticism from those denouncing them as a coup, unconstitutional, or a dangerous overstep of his authority. The mass celebrations in the streets that broke out immediately after his televised announcement — in spite of a nighttime curfew — are evidence of the popularity of his moves. Some polling since then, which although unclear in their methodology, also seem to indicate that large majorities approve of Saied’s measures — for now.

Saied has racked up some quick successes in the eyes of his constituencies: lower consumer prices on certain goods for middle-class shoppers and more importantly, an epic vaccination campaign ramp-up on Sunday, Aug. 8, which saw over half a million vaccinated — more than 4% of the country’s population — in a single day. The leg work for this epic task was carried out largely by tireless volunteers and health workers, but success has many fathers and, as far as patriarchs go, Saied has upstaged the rest. The vaccine success story has been a boon to his political capital.

But the popularity of Saied or his decisions — and faith in his willingness or capacity to solve the multiple crises Tunisia is facing — is likely to wane over time. At the moment he enjoys significant political capital, but every day that the pandemic continues to ravage the country, that public services remain inadequate or inaccessible, that security forces retain their repressive powers and disproportionately practice them against the poor, that the cost of living remains out of reach for many, is a day his capital is diminished. His concentration of powers makes it clear that Carthage Palace is in charge, meaning it is the sole governing institution left for people to blame if things do not quickly improve.

Adding to scrutiny of the palace is the lack of clear communication. So far, the president’s strategy has been to use the bully pulpit of the Presidency’s official Facebook account and video team to transmit presidential lectures to various officials on how state institutions ought to be operating. Tunisians and international observers are all left hanging on the executive decrees published on the Presidency's Facebook page, and to a lesser extent the statements of civil society groups issued following their private meetings with President Saied. Consultant and researcher Habib Sayah has called on the Presidency to give daily press briefings, a straightforward step that would at the very least promise some transparency and assuage a public understandably concerned about the new direction in which Tunisia may be heading.

While many were expecting the president to bring in a prime minister and a new government soon after his July 25 decisions — something that would also diffuse responsibility (and blame), the delay in naming one has already called into question whether the president planned his own strategy sufficiently in advance before taking the exceptional measures. At the same time, Saied does not seem to be moving quickly to delegate or deputize other state institutions to carry out his political vision, particularly his pledge to root out corruption or recover funds from tax evasion. The Financial Judicial Pole, a state prosecution body specialized in financial crimes, announced it had opened investigations into foreign financing of the 2019 electoral campaigns of three political parties. But the National Anti-Corruption Authority (INLUCC) does not yet seem to have been invigorated with new powers or renewed purpose — perhaps because its chief was a source of dispute between President Saied and Prime Minister Hichem Mechichi.

The prosecution of MPs with open criminal cases against them could also buy Saied more political capital, given the widespread perception that parliament is corrupt. But so far, prosecutors and security forces have prioritized cases of defamation against officials rather than money laundering, misappropriation of public funds, or sexual assault. The arrest of Yassine Ayari, sentenced by military court for charges that include defaming top uniformed brass, may signal Saied's deference to a military he has depended on to enforce his decisions. Already there has been criticism from ordinary people for prioritizing prosecution of speech and Ayari’s case. There is always a risk that prosecutions for some but not others will mirror the “selective” anti-corruption campaign of former Prime Minister Youssef Chahed, which many criticized as targeting political enemies.

If prosecutions continue to move forward on defamation cases while moving slowly or not at all on alleged financial crimes, this will undermine the credibility of Saied’s anti-corruption rhetoric. Saied had announced he would pursue businessmen who profited at the expense of public coffers under the Ben Ali regime, offering immunity from prosecution in exchange for returning funds in the form of public projects. While Saied noted he would use the 2011 report on corruption by Abdelfattah Amor as a guide, the details of how this might work are unclear, and lack of progress on this front could also sap the president’s political capital.

There’s a possibility that Saied’s unorthodox style could make some state mechanisms more responsive and effective in addressing certain health and economic issues, which would likely win him plaudits from Tunisians asking for results. However, recovering stolen assets and making tax collection more effective and just are easier said than done. Meanwhile, the longer-term challenges of rebuilding the public health system in the face of loan-conditioned austerity and restructuring the economy to prioritize domestic needs will require confronting powerful business interests and international creditors. Not only has President Saied not indicated a willingness for confrontation on this front, even a more powerful Presidency with a popular mandate cannot accomplish such long-term reforms alone.

These long-term issues and the misery they have produced played no small part in allowing President Saied’s July 25 moves. But just as they facilitated Saied’s concentration of powers, so too can they undermine his popularity and political capital going forward. As one man in a working class neighborhood of Tunis told independent media outlet Meshkal: “We don’t care about Ennahdha and Kais Saied. We just want some dignity.”

Fadil Aliriza is the founder and editor-in-chief of Meshkal.org, an independent news website in English and Arabic covering Tunisia, and a Non-Resident Scholar with MEI’s North Africa and Sahel Program. The views expressed in this piece are his own.

A coup or not? What happened in Tunisia and what comes next?