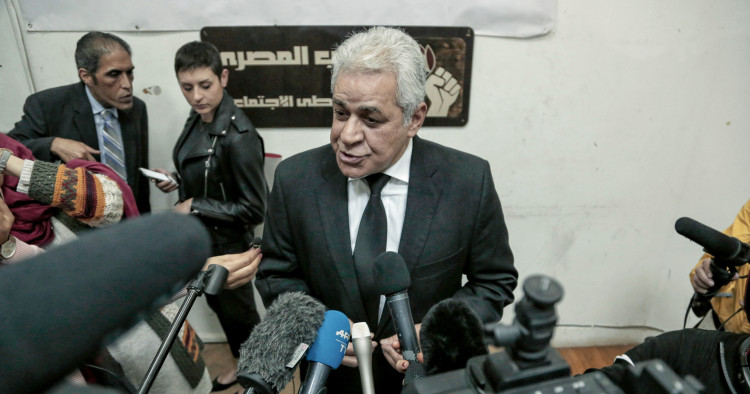 As a journalist and former president of the Egyptian opposition Dostour Party, which was established by Nobel Peace Prize laureate Mohamed ElBaradei in 2012, I suffered 19 months of imprisonment without trial between September 2019 and April 2021, similar to hundreds of other secular, pro-democracy opponents. However, since my release from prison, officials close to President Abdel-Fattah el-Sisi have been promoting the argument that after spending eight years in office, he has achieved a reasonable degree of internal stability, placed the economy “on the right track,” and was now open to work on political and democratic reforms.

I was invited to an iftar, or a Ramadan dinner, hosted by Sisi on Apr. 26, during which he launched a call for “political dialogue that does not exclude anyone.” He later clarified in statements on July 3 that there was “one exception”: the Muslim Brotherhood group. Its members continue to refer to Sisi’s removal of late president and Brotherhood leader Mohamed Morsi, on July 3, 2013, as a “military coup” and do not recognize the 2014 Constitution.

After he concluded his iftar speech, the Egyptian president walked toward the table where opposition leader Hamdeen Sabahi and I were seated and warmly shook our hands. Only a few months before, both of us were dubbed in pro-state media as enemies of the state and stability, foreign agents, and supporters of the destructive Jan. 25, 2011, revolution that later allowed the Muslim Brotherhood to take power. The only demand I made during a brief exchange with the Egyptian head of state was to speed up the release of hundreds of political prisoners, especially those held only for expressing their views, on social media or in media interviews, that the security agencies deemed harmful to stability.

Many opponents remain skeptical of the regime’s recent change of heart, call for dialogue, and readiness to listen to opposing views, and suspect that the about-face may not be genuine or will prove short lived. Fueling those suspicions is the lack of any obvious reason for President Sisi to issue a call for dialogue at this time. After years of suffering arrests, travel bans, asset freezes, and a total blackout of local media coverage of their activities, Egypt’s opposition parties have been weakened tremendously and currently pose no threat to the regime’s security. The Brotherhood is no exception. Indeed, when key regional allies, namely Qatar and Turkey, began a reconciliation process with Egypt, the group had to soften the tone of its attacks against the Egyptian regime. The organization also faces deep divisions among its hardline leaders, who see no chance for compromise with Sisi, and others, mostly sitting inside Egyptian prisons, who seem more open to a reconciliation.

Some observers have speculated that the regime suddenly called for internal dialogue this past spring in an attempt to mend ties with Washington ahead of the July 16 summit U.S. President Joe Biden held with leaders of nine Arab countries in Jeddah, Saudi Arabia, which Sisi also attended. Moreover, Egypt is hosting the 27th Conference of the Parties (COP 27) summit on climate in Sharm el-Sheikh in November. Informed diplomatic sources told this author that the United States and European countries have asked Cairo to carry out serious democratic reforms ahead of that high-profile international event.

Others believe that the growing economic crisis Egypt is facing has pushed the regime to resort to political dialogue to ease domestic pressure. Not only is the Egyptian economy suffering from the global effects of the Russo-Ukrainian war, but it has yet to recover from the devastating effects of COVID-19, all of which has contributed to the sudden explosion of the country’s import bill, especially for basic foodstuffs like wheat and cooking oil, along with a sharp decline in tourism income.

A third group, including individuals interviewed by this author, thinks the regime might not want to see in early 2024 a repetition of the 2018 presidential election scenario, in which Sisi ran unopposed, facing a sole candidate who stated that his agenda was to implement the vision and programs of the Egyptian president. This certainly did not look good, either domestically or internationally.

While the regime’s intentions remain unknown, security agencies in control of the political scene assured the leaders of Egypt’s secular opposition parties, which formed a coalition in 2014 known as the Civil Democratic Movement (CDM), that they mean what they say. One of the key demands of the secular opposition groups was the release of all political prisoners held for peacefully expressing their views, particularly those who were detained in a widescale crackdown in late 2019. And notably, prosecutors and courts have been gradually releasing prisoners over the past three months. Sisi also issued pardons to at least seven key opponents who were sentenced to three or four years in prison by the State Security Emergency Courts, whose rulings cannot be appealed.

CDM leaders have publicly stated that the number of individuals released was unsatisfactory. They were hoping for hundreds more to be freed, including prominent figures such as Alaa Abdel-Fattah, Zyad el-Eleimi, and Ahmed Doma, in order to create a real sense that political space was opening up again after eight years of severe restrictions. Egyptian opposition parties estimate that 250 political prisoners have been let out since Apr. 26. The head of the State Information Service, Diaa Rashwan, who was also appointed as the “general coordinator of the national dialogue,” placed the figure at 700.

Leaders of the CDM and other opposition figures, including myself and Sabahi, were again allowed to appear on talk shows on state-controlled TV networks for the first time in many years. Moreover, in preparation for the national dialogue, CDM figures and representatives of the presidency agreed to name an equal number of public figures to form a joint “general secretariat” in order to set the agenda for the political reconciliation meetings as well as establish lists of attendees and working groups. The General Secretariat for the National Dialogue held three meetings so far, and its participants decided to form three committees: political, economic, and social.

In recent months, opposition parties and groups have also started to experience relative freedom of movement they had not enjoyed in years. All parties have been holding meetings to prepare papers and proposals that they plan to present at the dialogue sessions with the government. The Dostour Party, which I belong to, managed to hold its elections on July 22; and more members showed up to vote than had been the case in years. A few regime opponents who had been forced into exile, such as Amr Hamzawy, have also returned home in order to participate in the reconciliation dialogue. Several other oppositionists made requests to return to Egypt, pending assurances they would not be arrested upon arrival.

What has been achieved so far is unlikely to satisfy hardline critics of Sisi, human rights activists, or the Muslim Brotherhood group. Seven major domestic human rights groups issued a statement on July 28 noting that while political prisoners were being released at a very slow rate, arrests continued in larger numbers — mostly ordinary, unknown citizens held for expressing critical opinions on social media. Recent trade union elections witnessed many violations; and security agencies prevented hundreds of workers from running in the first place.

Some critics who spoke with this author have noted that any tangible outcome for the proposed dialogue was precluded when Rashwan, the regime’s general coordinator for the process, told reporters on July 26 that the results of the wide-ranging discussions would be sent to the president and parliament to decide how to implement the recommendations. This would imply that there will be no obligation on behalf of the president to carry out the requested reforms.

However, in political and media circles, there remains a sense of relative openness since the call for national dialogue was launched. Realists will argue that it would be wrong to assume Egypt’s security agencies, which have traditionally opposed any domestic political opening, are likely to experience a sudden or speedy change in their modus operandi. Arrests and human rights violations will surely continue to take place. But the difference right now is that critics will not necessarily be arrested immediately; and there is some readiness on the part of the regime to allow their views to be heard publicly.

While Egypt’s opposition parties might differ on their specific economic and social agendas, they nonetheless all agree on the need for urgent political reforms that would restore a minimum level of political participation and freedom of expression. First, the security agencies must stop arresting Egyptians for peacefully expressing their views; second, all opponents sitting for months behind bars with no trial should be released; third, the regime’s tight control over the media must be eased and the blocking of news websites lifted; and fourth, the national legislature should immediately start working on amending the pretrial detention law as well as other laws organizing parliamentary elections.

If just these goals are achieved in the short term, that would be an assuring step forward considering the stifling political conditions that existed over the past eight years. If free and fair elections were to be held for the presidency in 2024, and for the parliament in 2025, that would permit the Egyptian people to actually decide what kind of economic and political reforms are most needed — and not necessarily what the elites ultimately agree on in what is expected to be a lengthy political dialogue. Until then, the ball is in the regime’s court to prove whether its call for political reform was serious or just a short-term tactic aimed at weathering a storm of complicated domestic, regional, and international conditions.

Khaled Dawoud is the deputy editor-in-chief of Al-Ahram Weekly and former president of the social-liberal Dostour Party. The views expressed in this piece are his own.